Outlander‘s Season 2 finale is bearing down on us like (270-year-old Spoiler Alert!) the British at Culloden. And if the approach of “Dragonfly in Amber” causes you a wee bit of angst — because there’s just too much good TV and you’ve slipped behind and where’s a time-twisting circle of stones when you really need one?! — dinna fash. You’ve got a week until the finale airs, and we’ve got you covered like Jamie’s plaid on a blustery Highlands morn.

Below is an ultraquick recap of each episode this season. If you’re super busy, use it as your backgrounder for what takes place in the extended, July 9 season-ender (9/8c). And if you happen to have a little leisure time this holiday weekend, use it as a guide as you watch Starz’s Season 2 marathon, starting Saturday at noon/11c.

Of course, if you want to read our full recaps of each episode, we’ve included helpful links to those, as well. So read on to catch up on what the Frasers have been up to since last ye checked in. 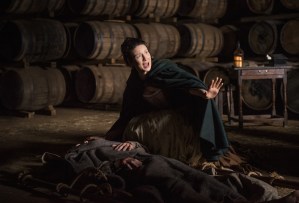 EPISODE 1, “THROUGH A GLASS DARKLY” | Claire’s back in Scotland. Years after she disappeared. And she’s pregnant, but only a little. Huh? Frank trashes a shed, then offers to raise the kid as his own… provided she never speak of Jamie again. She agrees. In a flashback, the Frasers make an enemy — the nefarious merchant Le Comte St. Germain — on their first day in France. Full recap here.

EPISODE 2, “NOT IN SCOTLAND ANYMORE” | Jamie meets Prince Charles Edward Stuart, leader of the Jacobite cause (which the Frasers are outwardly supporting yet secretly trying to thwart, in hopes of changing a history that ended badly for the Scottish clans). Claire learns that Jonathan “Black Jack” Randall survived the stampede at the prison and that his brother, Alex, is assistant to the Duke of Sandringham. Full recap here. 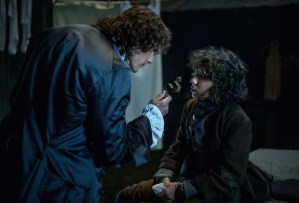 EPISODE 3, “USEFUL OCCUPATIONS AND DECEPTIONS” | A bored and pregnanct Claire begins volunteering at a charity hospital. Jamie essentially adopts a young pickpocket named Fergus. The Frasers yell at each other a little. Full recap here.

EPISODE 4, “LA DAME BLANCHE” | Claire and Mary Hawkins, a young Englishwoman she’s befriended, are attacked in the streets; Mary is raped, and Claire is sure Le Comte is behind it all. The Frasers host a dinner party designed to thwart Prince Charles’ funding for the war; it doesn’t work. Claire and Jamie make up, and it carries over into the (very blue) bedroom. Full recap here. 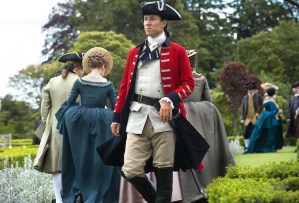 EPISODE 5, “UNTIMELY RESURRECTION” | Claire and Jamie run into Black Jack Randall at Versailles. Jamie and Randall agree to duel, but Claire asks her husband to put the fight off for a year, which is time enough for Randall to father the child who will eventually become Frank’s ancestor. Jamie angrily agrees, but he really doesn’t like it. Full recap here.

EPISODE 6, “BEST LAID SCHEMES” | The Frasers tell Murtagh that Claire is a time-traveler. When Jamie catches Randall trying to rape Fergus, the duel is back on. The fight ends with Jamie’s sticking his sword into Black Jack’s crotch and Claire’s fainting on the sidelines as she begins to miscarry their child. Full recap here. 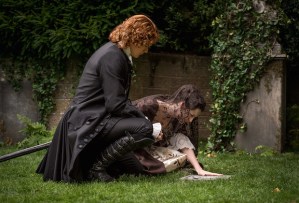 EPISODE 7, “FAITH” | Claire and Jamie’s daughter, who is named Faith, is stillborn at the charity hospital. Jamie is thrown in the Bastille for dueling. Claire springs him by asking a favor of the king. Le Comte dies, and Claire is there, but it’s not her fault. Realizing France was a verra, verra bad idea overall, the Frasers plan to return to Scotland. Episode post mortem interview with Caitriona Balfe here.

EPISODE 8, “THE FOX’S LAIR” | Back in Scotland, Jamie and Claire try to get his grandfather, Lord Lovat, to support Charles’ cause; they’re kinda successful. Laoghaire pops up again and clearly isn’t over Jamie. Full recap here and post mortem interview with Nell Hudson here. 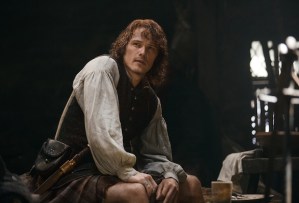 EPISODE 9, “JE SUIS PREST” | Dougal, Rupert and Angus show up ready to fight with the Jacobite army, though Jamie’s uncle chafes at having to take orders from his nephew. Lord John Grey, who will be important next season, is introduced. Claire suffers WWII PTSD. Full recap here.

EPISODE 10, “PRESTONPANS” | The Jacobite army is victorious over the British at the Battle of Prestonpans, but Angus dies. Full recap here and post mortem interview with Stephen Walters here. 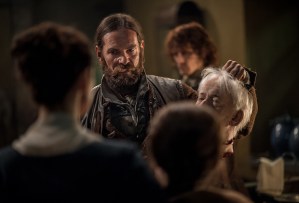 EPISODE 11, “VENGEANCE IS MINE” | Rupert loses an eye when Jamie’s camp comes under enemy fire. Claire winds up at an estate belonging to the Duke of Sandringham, who tricks her into luring Jamie there so he can turn him over to the British. Oh, and Mary Hawkins is staying there, too. Claire realizes that Sandringham was behind the attack/rape in Paris; this news causes Murtagh, who rides to the ladies’ rescue with Jamie, to behead the aristocrat. Full recap here and post mortem interviews with Duncan Lacroix and Simon Callow here.

EPISODE 12, “THE HAIL MARY” | Prince Charles presses on, even though the army is about to drop. Claire runs into Mary, who is living with Alex Randall; Black Jack is there, as well. Alex is dying, so he asks his brother to mary Mary, who’s pregnant. Black Jack eventually agrees, but no one thinks the union is a good idea. And in exchange for easing Alex’s suffering, Black Jack gives Claire info on British troop movements. But the prince botches Jamie’s last possible chance at subverting the massacre to come, so onto Culloden Moor we go!  Full recap here.

Now you’re all caught up! Hit the comments with your thoughts as we head into the season finale.