Cram in one last croissant and pack up your petit fours, because the Frasers are putting Paris in their rearview in this week’s Outlander. Claire and Jamie return to Scotland hoping for a respite from the tiresome-yet-terrifying politics that have plagued them in the City of Lights… and instead run directly into new tiresome-yet-terrifying politics — only this time, in plaid!

Jamie and Claire’s efforts to stop the Jacobite Uprising haven’t worked so far, and when everyone’s favorite royal pulls a really lame move early in the hour, the Frasers are basically forced to join in the fight they’d worked so hard to prevent. And if that weren’t bad enough, they then have to contend with Jamie’s old codger of a grandfather and the resurgence of Laoghaire?

Read on for the highlights of “The Fox’s Lair.”

HOME AGAIN | The episode opens at Lallybroch, where Jamie and Claire look rested, happy and very relieved to be gone from a country where they might be called upon to watch a king take a poo. Claire, in particular, seems very content to be back in her homespun and arm warmers, jostling among Jenny and Ian’s brood — which has grown by one more baby girl since they’ve been gone. And the potatoes Claire told Jenny to plant have grown nicely, meaning that the family and Jamie’s tenants won’t starve anytime soon.

The Frasers seem to have healed any lingering rift between them, if the way they’re holding each other close while surveying the harvest is any indication. Geez, these two can make even a discussion about boiled potatoes sound like Red Shoe Diaries-level erotica. Get ye a room! 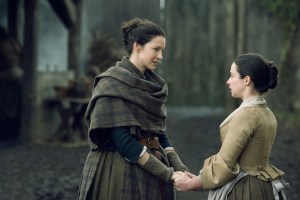 When the mail arrives, it’s cause for celebration — books! A letter from Aunt Jocasta! (aww, hi Jocasta!) — and cursing on Jamie’s part: Prince Charles forged Big Red’s name on a document of Highlanders pledging support to the Jacobite cause, and that document has since been widely circulated. Jenny sums it up succinctly, though with great alarm: “The names on this are traitors to the Crown,” meaning Jamie will be hanged if he’s caught.

Claire floats the idea of escaping to Ireland or the colonies, but Jamie says he couldn’t leave his sister, her family and the other tenants behind. So he rather quickly changes tack, arguing that if he and Claire work to help the Jacobites rather than hinder them, perhaps they can change history on that end. And just like that, the Frasers have a new plan.

WHAT DOES THE FOX SAY? | So Jamie begins tallying up his men, figuring out who can join him and Claire in the battles to come. He assigns Murtagh some prepatory duties and plans to rendezvous with him and Fergus in two weeks’ time. Meanwhile, Claire and Jamie will try to drum up support from the highland clans, starting with Jamie’s ornery grandfather: Lord Lovat, who’s a big jerk, has a yen for getting control of Lallybroch, goes by the nickname “the Old Fox” and has used nefarious means to secure himself brides in the past. Lovely.

Just before bed that night, Jamie sadly admits to Claire that his father was one of Lord Lovat’s acknowledged bastards, and that Jamie was too much of a “coward” to tell her before they wed. Claire doesn’t care, but it’s clear that Jamie does. So she’s like, “Shh, let me sex you into not caring about this so much.” And she later wakes up to find him downstairs by the fire, speaking soft Gaelic to his new niece. Claire tears up — and so do I, because my god, Faith! — as Jenny quietly approaches and explains that Jamie couldn’t sleep, so he took the baby so she could rest and he could unburden his worried heart. The way he’s talking to the bairn is “the way we talk to them before they’re born,” Jenny says, looking at her sister-in-law with a knowing, loving eye. “Ye’ll know.”

GRANDFATHERED! | The next morning, Claire and Jamie leave for Lovat’s Beaufort Castle (I loved Ian and Claire’s “Take care of your Fraser” exchange), where they encounter two surprises: Colum is there (!), and so is Laoghaire(!!).

Spoilers from the books ahead, so if you want to stay oblivious, skip to the next paragraph. In Diana Gabaldon’s books, Laoghaire doesn’t show up again until Voyager — the third novel in the series — and when she does, it’s years after the events that take place in this week’s episode and she’s known as Mrs. James Alexander Malcolm MacKenzie Fraser. (Just in case you haven’t read the books but kept plugging through this paragraph anyway: YEAH. I KNOW.) Anyway, to get more on Nell Hudson’s return to the series — and to find out whether she’ll be back this season — make sure to read our post mortem after you’re done with this recap.

OK, Newlanders, it’s safe to return! While Jamie, Colum and Lord Lovat talk war, Laoghaire seeks out Claire. “I need to tell ye: I am changed, and I am sorry, beyond measure, for the horrible wrong I’ve done to you,” the girl says, all pious-like. Stone Cold Claire Austin makes Laoghaire cry as she says she pities her: “The dark places you must have inhabited in hopes of getting something that you’ll never have.” I hope Mistress Fraser has some aloe in her bag, Laoghaire, because that was a harsh burn.

WHO WANTS WHAT? | There’s a lot of diplomatic talk that goes on while the Frasers are at Beaufort Castle, so let’s distill it like a fine single malt, aye? Colum wants Lovat to remain neutral — like Clan MacKenzie — and thinks that the rebellion will fizzle out before it even starts. But Lovat refuses, mainly because he wants Lallybroch and is still really mad that Jamie’s dad, Brian, chose to renounce the old man even after Jamie’s mom’s death.

And so Lovat first tries to trade his support for Jamie’s family home, then threatens to rape Claire if Jamie doesn’t offer his loyalty. “Go ahead,” Jamie says with a smirk, playing the La Dame Blanche card pretty hard. I get the “My Chick Bad” swagger, JAMMF, but seeing as Claire has been nearly “ravaged” twice in the short time she’s known you, maybe we lay off a little?

Meanwhile, Claire grudingly enlists Laoghaire’s help in bucking up Lord Lovat’s weakling son, Simon, whose support for the Jacobites may just help his dad decide to come to the same conclusion. One problem: Mistress MacKenzie isn’t that bright, and her subtle wooing — which is supposed to help young Simon feel like more of a man or something — goes sideways when he’s spooked by her offer of a “keek” down her dress. Oh Laoghaire, once again: Put those things away!

INFAMOUS LAST WORDS | Long story slightly shorter: Nothing works, and Jamie is about to sign over Lallybroch to his pill of a grandsire when Claire fakes a vision in front of everyone in the castle’s great hall. Repeating what she heard from Lovat’s own “seer,” she claims to have seen the old man standing before an executioner’s blade, surrounded by white roses — the symbol of the Jacobite movement. And when the freaked-out Lord Lovat comes at her with a knife, his son steps up to save Claire and to state that he’s joining Jamie in the fight to come. But his dad doesn’t take the bait, and instead signs a neutrality agreement with Colum.

Again, non-book-readers, skip to the next paragraph. Book readers: Can we discuss Colum not being [spoiler] by this point in the narrative? I’d really like to talk about this. To the situation room! (And by that, I mean let’s tweet about it this week.)

The next morning, Simon rides away from Beaufort Castle with Jamie and Claire… only to run into his father’s men, all suited up for battle. Guess what? The Old Fox is having it both ways! Officially, he’s neutral. But in practice, he’s serving the Jacobite cause. Sneaky!

Oh, and right before Claire and Jamie take off, the Sassenach prods her man into thanking Laoghaire — though he makes it very clear that he doesn’t know why and doesn’t care to. She says she hopes someday she can earn his forgiveness… and then as Jamie is walking his red-headed fineness away from her, she adds, “and your love.” Claire, now might be a good time to look under your horse for an ill wish, mmmkay?

Now it’s your turn. Did you notice that the theme song reverted to English? If you have any, what are your thoughts on the Colum matter? Sound off in the comments!