Warning: This post contains spoilers from this week’s Outlander. If you’re behind, dinna fash — you can read last week’s recap here.

The Frasers’ Parisian tour of pain continued in the latest Outlander, when Claire delivered a stillborn daughter, nearly died of childbed fever, accidentally sent one of her enemies to his death and then had to have sex with a monarch in order to free her estranged husband from jail. (And you thought you had a rough week.)

The death of Claire and Jamie’s child Faith, as well as the physical and emotional distance between Lady Broch Turach and her husband, made for an “intense” episode experience, star Caitriona Balfe tells TVLine.

“I think by the end of the week, my eyes were so swollen, I went away and had ice packs on them,” she says, chuckling.

Below, Balfe discusses how she approached some of Claire’s lowest moments in the series so far, finds a bit of levity in a pivotal prop and previews what the Frasers’ return to Scotland will mean for our favorite time-traveler and her man. 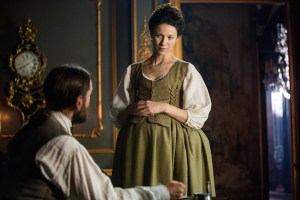 TVLINE | “Faith” is one of those episodes that those who know Diana Gabaldon’s books kind of dreaded, just because it’s so heartbreaking. You’re familiar with the source material; how long before you shot the episode had you been thinking about it?
From the very get-go of the season. It was very important for us that this pregnancy didn’t get pushed completely to the sidelines, because I think when you know that this is going to happen, it’s important that you make the readers first of all be on board and see the hopefulness and see the importance of the pregnancy, for then the loss of it to have an impact. It was a struggle this year to balance the personal journey with the whole political storyline, and we tried to, as much as we could, to bring in that pregnancy and to make the child very much part of the Jamie/Claire relationship and their safe space. So yeah, you constantly know where that journey is going to lead you to.

TVLINE | How much did you and Sam Heughan talk about it?
We didn’t discuss the miscarriage much because, for the characters, they went through this sort of very separately. And that was also quite important to have each of our own journeys with that. But in terms of the pregnancy and what that meant to them and all of that, we talked about that stuff quite a lot.

But yeah, once it came to the work to be done on Episode 7 and most of that, it was quite separate because they are basically estranged from each other during this. It was important as well for Claire. while she’s experiencing all of this anger and grief, that was her private journey to work out within herself.

TVLINE | The scenes where you’re holding the baby are so raw. Tell me about shooting them.
We filmed about six days in total. The place where we filmed, that was the Glasgow Cathedral, which was actually a really special place to film it. It’s been there since the 1100s in some form… It’s a really beautiful, special place — and I’m not particularly religious.

It did have many little chapels within this massive cathedral. We were filming downstairs, and between takes I would just go up and I would sit at this little altar and I would play my music. There was a couple of songs that I would play on repeat. I just sat there and I became very aware on the first day that this is a place that I would imagine thousands of women have gone to seeking solace or seeking comfort for very similar things. In a weird way, to be able to feel that history of grief or history of need was very helpful. It was definitely one of the most intense acting experiences of my career to date, but it felt very important to try and be very respectful and hold this space for Claire’s grief, if I could.

TVLINE | What songs did you listen to?
There were a few. One was a song from Judee Sills, who’s an old like ’70s folk singer, and another one was [by] This Mortal Coil. The singer [Elizabeth Fraser], she was originally from the Cocteau Twins. It’s this haunting song that Jeff Buckley’s dad Tim Buckley originally recorded.

TVLINE | The prop baby was very real-looking. Did that freak you out at all?
Oh, it’s incredibly lifelike. And it was quite strange, because it also had the weight of a baby. It was so real looking, and it is quite strange when you have that. One thing it did have was this quite fuzzy tuft of red hair that was the most un-lifelike thing, and I think the makeup department was constantly trying to smooth it down with oil and make it slightly less fuzzy. But yeah, that’s very helpful, to have something that is so lifelike so that you’re not taken out of the moment, you know, looking at this baby doll. 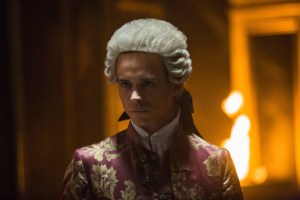 TVLINE | I can imagine. Later in the episode, Claire goes to see the king, knowing that he’ll expect sex. What mindset did you have for Claire, going into that meeting?
Well, what I loved was that fantastic line between Claire and Mother Hildegarde when she says, “If it comes to my virtue, I’ll add it to the number of things I’ve already lost in Paris,” and I felt that was the whole key to that scene. Because for her, the worst has already happened. Claire has been such a resilient character, and she has this un-extinguishable hope at her core, but I think that losing her child has in a way extinguished that. It’s ruptured her to the core, and I don’t think she will ever be the same again. She blamed herself so much for what happened that, in a way, it was a punishment to herself — if that’s not too twisted.

She knew exactly what was going to be asked of her, and it wasn’t too much of a price for her, because at this point, even though on the surface she’s still angry at Jamie, I think that’s mostly a projection. Who she’s really angry at is herself… Whether or not she’s ready to admit it to herself or not, she knows that if she’s to have any hope of survival in a spiritual way, or in an emotional way, that she needs Jamie back in her life. And she’s prepared to do anything for that.

TVLINE | Claire claiming her witch-hood, during the scene with St. Germain and Master Raymond, seems like a very dicey move. It could have gone so badly for her, given what we saw at Cranesmuir last season.
At this point, she doesn’t really have anything to lose, but also this is… what I love about her in terms of her ability to survive and adapt very quickly. She very quickly starts playing this role and is able to figure out exactly how to maneuver within this really dangerous situation. She knows enough information about both Master Raymond and St. Germain, what the king is in fear of — the fact that it’s the dark arts and black magic, but obviously she knows he must believe in it enough to care.

So her ability to use that information against him and use it to her own benefit was so great, it just shows how intelligent she is. That scene is so wonderful. It’s got so much tension underneath, and she doesn’t want to have St Germain killed. She does what she can to protect him in a way, but unfortunately Master Raymond takes care of that for her. [Laughs]

TVLINE | Talk to me about the scene in which Fergus, played by Romann Berrux, tells Claire what really happened at the brothel.
He’s just this fantastic young actor and one of the sweetest young kids to have around, as well… I loved the simplicity with which he played it. I mean, in the hands of someone less skilled, they might have tried to really over-emote or something, and it would have taken away the power of it… It’s just so heartbreaking when you realize that this poor little kid has been sitting on this information and has gone through this horrific ordeal and blames himself and has never said a word. It’s heartbreaking stuff.

For Claire, it’s a real awakening that her pain and her grief may be all-consuming, but actually she has to realize that there are other people in her life and that she needs to take care of. And that’s the catalyst, really, for her to go and get Jamie back.

TVLINE | At the end of the episode Jamie and Claire are reunited and talking about returning to Scotland. Give us a sense of what’s ahead for them.
Scotland’s a very healing place for them. That is their home, and that’s why we’ve been fighting so hard in these first seven episodes to change the political landscape of Scotland so that they can go home. Unfortunately, France has proved to be a very disastrous place for them… Jamie says is that the weight of this pain is too much to bear for either of them alone, so they need to be together. We’ll see, going forward, how they heal and how this bond gets stronger. We know from Act 1 [of the season] that maybe things don’t work out completely, but I think you will see the old Claire and Jamie that we’ve come to know from before.