Even before the Starz adaptation’s first “och” was uttered, readers of Diana Gabaldon’s Outlander novels knew that Jamie’s rape at the end of Season 1 would be a hard to witness, highly upsetting and barely survivable event for them — let alone Mr. and Mrs. Fraser. In a similar vein, ardent fans have been aware for some time now that a painful swath of Book 2 was barreling its way down the cobblestone path.

That terrible interlude begins in this week’s episode, and if you’re anything like me, right about now you might need a hug… or a dram… or a magical, fiction time machine where we skip the sadness and jump to the next snogging scene.

Don’t worry, those of you Newlanders who haven’t devoured the books: I won’t spoil anything for you. Suffice to say that life for Claire and Jamie will get worse before it gets better. But, as we’re reminded in this week, they always find their way back to each other, right? RIGHT?

Read on for the highlights of “Best Laid Schemes.”

A DUEL DELAYED | When we check back in with the Frasers, Murtagh is buzzing with excited plans for the duel now that Randall’s been released from the Bastille. “I’m not dueling with Randall,” Jamie quietly informs his godfather, who demands to know why. “I ken I’m a simple man, but strive for an explanation,” he tells Jamie, who responds, “I canna.” They throw a few more “cannas” around, then the argument ends when Jamie growls, “Trust I’ve a sound reason” at the stymied older man. (Side note: The sheer Scottishness of this scene makes me giddy. I canna explain why.)

RUN, RAYMOND, RUN | Meanwhile, Claire runs takes over dressing a body for burial at L’Hospital des Anges, because Monsieur Forez is needed to serve his kingly duty — aka kill people the Crown wants dead. This batch of the damned will be “practitioners of the dark arts and all those who associate with them,” he informs Claire, going through a rather graphic explanation of how to draw and quarter someone. It soon becomes clear that the ghoulish hangman is giving Claire a veiled warning meant for Master Raymond.

So she runs to the apothecary’s shop to tell him to skedaddle ASAP, and though he brushes off her concerns at first, he soon realizes he’s got to leave town — and that Madame Fraser put herself at considerable risk to alert him. “This is what friends do for one another,” she answers simply.

WE GOOD? | At home that night, the anger Jamie felt toward his wife at the end of the previous episode is either gone or has been bottled up and put in a dark corner to age like a fine Glenlivet, because he’s rubbing her feet in a fairly loving manner. Jamie brings up their argument, refuting her claim that she owes him a life, because he’s saved her a few times, too. “I owe Frank nothing. You had a free choice, and you chose me,” he says. But as Claire starts to get all worked up, he tells her he agreed to delay killing Black Jack because he fears they won’t be able to change history, and that he’ll wind up having to fight in the Battle of Culloden after all.

“And if anything should happen to me, I want there to be a place for you. Someone to care for you, for our bairn,” he says, eyes shiny. “I want it to be a man who loves you.” He makes her promise she’ll go back if things get bad, and she does, then they kiss and he kisses her belly before laying his head on it. Inside Claire’s abdomen, even the Fraserspawn grabs a tissue and dabs at its eyes, so rife with emotion is the exchange.

FULL DISCLOSURE | All that talk aside, the Frasers are still trying to tank Charles’ wine-soaked business venture with St. Germain. So Claire comes up with a way to fake smallpox (via an elixir to be slipped into St. Germain’s sailors’ drinks and an irritant to be brushed on their clothes), and Jamie and Fergus ride to Le Havre in an attempt to make the harbormaster condemn the ship as poxed — like he did in the first episode of the season. But first, Claire and Jamie agree, Murtagh needs to know everything.

So Jamie tells him. In Gaelic. And at the end, Murty says, “If you believe your wife to be a witch, then who am I to contradict ye?” Then he punches Jamie in the jaw for not trusting him with the info from the beginning. All good! Later, Murtagh and Claire share a nice moment when he tells her he wouldn’t want the “burden” of knowing the future.

WINE AND RUSES | The smallpox ruse works… kinda. The “sick” men are sequestered before the harbormaster can do anything, but the wine still needs to get from the port city to Paris — so guess who’s going on a road trip? Because St. Germain will also be along (he doesn’t trust Jamie, which means he’s as smart as he is evil), Jamie and Murtagh devise a plan in which a masked Murtagh and some hired goons pretend to be the gang Le Disciple and ambush the wine transport, stealing the cargo.

The night before the ruse, Claire frets. “Bad things happen when we’re apart,” she tells Jamie while they’re in bed, but he points out that they always return to each other. Just then, the baby moves, taking Jamie by pleasant surprise. “I canna wait to meet ye,” he whispers to Claire’s bump, right before their kiss soon turns into a prelude to sweatier pursuits. “Can we… with the bairn?” he asks, and it’s a good thing Claire’s already knocked up, because she probably would’ve gotten pregnant from Jamie’s tone of voice on that line reading alone. Damn, Heughan! Anyway, Claire says it’s fine as she hitches a leg over her husband, and here ends the smutty reading. Thanks be to Gabaldon.

CHARLES IN CHARGE OF OUR DAYS AND OUR NIGHTS | While Jamie’s away, Claire spends some time trying to turn Louise and her vapid high society friends into social crusaders (A+ for effort, Claire), then throws herself into work at l’hospital. When Mother Hildegarde notices that her top nurse doesn’t look so great, she makes her lay down. That’s when she notices that Claire is bleeding — something she assures the mom-to-be is normal — and then forces her to stay there for the night.

Jamie returns to Paris the next morning and barely has time for a companiable (and cute) breakfast with Fergus before he’s called to Maison Elise: Charles, despondent over the robbery of the wine, has racked up a high bill at the brothel, and he’s refusing to pay. So Jamie and his wee charge visit the house of ill repute. While Jamie is settling Charles’ account, Fergus wanders off and starts poking about in various rooms. When he sees a small bottle he wants to filch, he steps into a bedroom and grabs it. But then the door closes behind him, and we don’t see who’s there, but the boy looks rather worried/scared. 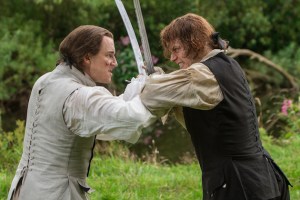 ‘YOU PROMISED’ | Claire comes back to the apartment later that day, looking pretty peaked and wondering where Jamie is. Finally, Suzette spills the beans, saying, “Milord got into a fight with an English officer.” With a sick look on her face, Claire reads the succinct note Jamie left behind: “I’m sorry. I must.”

So Claire lurches her pregnant, ailing self back to the carriage and demands that Magnus take her to the woods where she knows Jamie and Randall are dueling. She’s in serious discomfort/pain on the way there, angrily breathing “You promised!” like it’s her Lamaze focus phrase. And when she gets to the clearing where Black Jack and Jamie are sweaty and trying to fillet each other, she realizes there’s nothing to be done. “All I could do was wait to see which of my men would die: Jamie or Frank,” she voiceovers as the swords clash in front of her.

As it turns out, there is something Claire can do: have a very scary obstetrical incident, in which she doubles in half, cries out like she’s being drawn and quartered and bleeds copiously. And speaking of bleeding copiously, Jamie rams the tip of his sword into Randall’s crotch, doing serious damage and effectively ending the duel.

Then a lot of bad stuff happens all at once. The police arrive. Jamie hears Claire cry out in pain, but the gendarmes stop him from going to her. Claire collapses, barely able to tell Magnus to get her to l’hospital l’STAT. And just before she passes out, Caitriona Balfe clinches her Best Actress in a Going-Into-Shock Scene Emmy nod. Girlfriend looks like she is in trouble.

And that’s where we’ll leave it for this week. What did you think of the episode? Sound off in the comments!