In the arcade-claw game that is Jamie Fraser’s life, another coveted — and, in this case, annoyingly smug and deserving of death — toy just slipped out of grasp.

This week’s Outlander has Lord Broch Tuarach run into his longtime enemy/recent rapist Black Jack Randall, and it’s not long before the two men make plans to duel. But Claire decides that the threat to her future husband (as in, husband from the future) is too great, and for reasons we’ll get to in a minute, she asks Jamie to stay his hand just a little while longer.

Does he agree to her request? Read on for the highlights of “Untimely Resurrection.”

THE MORNING AFTER | As the household staff works to clear away the detritus from the party/brawl, Claire’s voiceover tells us that the gendarmes arrested everyone — including her husband — and they’re all cooling their heels in the Bastille. When Jamie eventually returns, he carries a sleeping Fergus to bed (aww) and then has an early morning debrief with Claire: Duvernay got him released, but Alex has been fired by the Duke of Sandringham and is still a prisoner, thanks to Mary’s uncle saying he saw the young man attack her. Claire looks pained, then informs Jamie that St. Germain and Prince Charles left together, which makes him look pained. “No good can come from that pairing,” he muses.

This is really the first time the Frasers have been able to decompress since Claire’s attack; Jamie wonders how she got away. When she mentions that the men were spooked by “La Dame Blanche,” Jamie looks guilty: One night at the brothel, he told Prince Charles that he was married to La Dame Blanche — or “the white witch,” who would surely shoot a curse up under his kilt if he ever got a room with one of the house’s ladies.

The episode takes its first big diversion from Diana Gabaldon’s novel by having Claire react with mild alarm, rather than mild amusement, to this news. She wonders how he can joke about her being a witch “after everything that happened at Cranesmiur?” (A valid point.) “There may have been a fair amount of drinking involved,” Jamie mumbles, chagrined. (Ha.) Later, Murtagh’s recon unearths that the attackers likely were members of a gang that roams the streets, causing mayhem, and requires its newest members to violate a virgin as initiation.

BUTT OUT, BEAUCHAMP | When Claire visits Mary the next day, she’s uneasy around the young woman. I’m going to chalk that up to guilt. Mary is holding up surprisingly well, given what’s happened, though she fears that she’s pregnant. Claire gently explains that’s probably unlikely, given that her rapist “didn’t finish,” and vehemently states that Mary has nothing to be ashamed of.

Mary then tells Claire that she and Alex plan to marry when he gets out of jail, and asks Claire to deliver a letter exonerating Alex to the police. Because Claire has gotten really obsessed with the idea that Frank may not ever be born thanks to recent events, she considers burning the letter (she ultimately doesn’t) and — once Alex is released — takes it upon herself to meddle in the young couple’s relationship, convincing Alex that he will never be able to provide for Mary in the manner to which she is accustomed.

You guys know me: I am ride-or-die for Claire. Claire forever. Claire suis prest. But good god, she’s kind of unlikable in this episode, right?

WINE FOR WAR | As it turns out, Jamie was right: St. Germain’s cozying up to Prince Charles has created a terrible situation. Charles helped the French aristocrat secure a loan to buy a lot of Portuguese madeira. In exchange, St. Germain will sell the wine and share the profits with the Jacobite cause, which will give Charlie enough cash to prove to Duvernay and King Louis that he’s a) serious about a war and b) a worthy ally. What Jamie says: “Good news, indeed.” What the vein bulging out of Jamie’s forehead says: “[Gaelic curse] you, you [Gaelic curse] of a [Gaelic curse] whose mother [Gaelic curses] several [Gaelic curses] nightly.”

When the two businessmen meet privately to discuss logistics, it turns into a volley of threats. St. Germain says he hasn’t forgotten that Claire cost him a lot of money with the whole smallpox-on-board thing. “My memory is as long as yourrrrrrrrrs,” Jamie purrs, and all of those R’s trip off his tongue, spill out onto the table, fall into formation, brandish swords and stare at St. Germain with real malice as Jamie promises death if Claire’s life is threatened again. 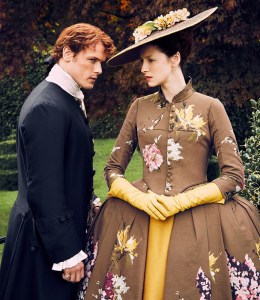 BACK AND BLACK | The next day at Versailles, ClairdszdfhsDOIFSHD;OLFKHNlkanxlknl’kn… oh, I’m sorry. I just drooled so hard on my keyboard upon seeing that slap-your-mama-beautiful dress Claire is wearing, my computer short-circuited for a sec. The intricate design! The brown-and-mustard combination! The elegant gloves! It is absolutely perfect.

Anyway, Jamie is there to help the Duke of Sandringham pick out some new horses. While the men are occupied, Claire strolls with Annalise… then literally crosses paths with Captain Jonathan Woolverton Go to Hell Randall, of His Majesty’s Eighth Why Aren’t You Dead Dragoons.

MIDDAY IN THE GARDEN OF GOOD AND EVIL | When Claire looks like she’s going to pass out, Annalise says she’ll run to get her husband. “Jamie?” Randall asks with a sick little smile. “He’s here? Where?” KEEP HIS NAME OUT OF YOUR MOUTH, SIR. THIS IS YOUR FIRST WARNING. Randall moves awkwardly — those cows knew what they were doing — but he is, as Alex said, most decidedly alive.

The conversation is surreal and terrible; when Randall mentions, the king, Claire responds, “F–k the king.” Perhaps it is because of the tension in the scene, but I giggle like a Tickle Me Elmo when Randall does this funny hand flourish and drops into deep bow: King Louis has arrived.

And when Jamie arrives to see the pair awkwardly talking with King Louis — who mocks Randall the moment he meets him (I knew there was something awesome about that funny, fey monarch) — it’s not long before the two men are making secret plans for an illegal duel. Claire seems unable to speak, so I’ll say it for her: Jesus H. Roosevelt Christ!

A DEBT PAID | Jamie is practically singing, he’s so happy to finally get to kill the sadist. So Claire does the only thing she can to stay his hand: She goes to the police and lies, saying that Randall was her attempted rapist. While the redcoat is detained, she tearfully begs Jamie to delay killing Randall for a year, when Black Jack’s kid/Frank’s next ancestor will have been conceived.

“Must I bear everyone’s weakness? May I not have my own?” Jamie asks incredulously, and though he fully gives in to his dramatic Scot side in this scene, I see where he’s coming from. In a voice so thick you could malt a milkshake with it, he says, “You’d stop me taking vengeance on the man that made me play his whore?”

Claire gets it, too, but she doesn’t back down. She cries. Jamie agrees to her terms. “A year,” he says. “Not one day more.” And when she gratefully reaches for him, he steps away quickly. “Do not touch me,” he growls.