It takes a poisoning, a spilled secret and some unfortunately placed hickies, but Outlander‘s Claire and Jamie are once more in accord — and just in time, thank the gods.

That’s because the Frasers will have to marshal all of their combined resources to combat the growing threat that is Le Comte St. Germain, who makes not one but two (we suspect) deadly plays for Lady Broch Tuarach in this week’s episode. More importantly, who wants an Outlander where Jamie and Claire aren’t shagging on the regular? That’s like a Bones where Brennan suddenly decides to hand off the hard cases to the squints or a Grey’s Anatomy where Meredith comes down with a case of happy-all-the-times or a Game of Thrones where Littlefinger buys all of his working girls turtlenecks for Christmas.

It’s also ironic that Claire’s reputation as a witch, which so recently landed her in trouble, proves her saving grace toward the end of the hour — though, sadly, not in time to help poor Mary. (Yes, I know you have FEELINGS! on that, as do I, and we’ll get to them in just a moment.) Read on as we review what happens in “La Dame Blanche.”

CHECKMATE | Claire looks on while Jamie and Duverney play chess in Versailles. The finance minister politely inquires about potential names for the nascent Fraser; it quickly becomes apparent that Mom and Da haven’t discussed the matter yet. Her vote: Lambert, after her beloved uncle. His: Dalhousie, after a Scottish castle. (Side note: Neither of those pass the Little League test, aka can you imagine a kid’s baseball coach yelling, “Dalhousie, get your glove and take center!” or “Slide, Lambert, slide!”? But I suppose that’s not as important back in ye olde day.)

Le Comte St. Germain interrupts the game to shoot looks of hatred at Claire, who gives it right back to him. After he passes, it becomes apparent that Duverney and Jamie need to talk Jacobite business, so Claire grabs a drink and stands in the corner while the men chat. After one swallow of the glass she takes off a waiter’s tray, you can tell Claire is having trouble. Moments later, as Germain watches with interest and a panicked Jamie runs to her side, she’s having a full-on coughing, choking, heaving episode. Good lord, choking is bad enough; can you imagine doing it in a corset?

The bad news? Someone, likely St. Germain, tried to poison her. The good news? Both she and the baby are OK, she assures Jamie later as she’s resting in bed, likely because what the attempted murderer thought was a fatal tincture was actually bitter cascara, which causes stomach cramping and other unpleasantness but won’t actually end a life. (That scene in Master Raymond’s shop last episode makes more sense now, eh?)

The Frasers chat about their mission, hatching a plan in which they’ll host a dinner party and somehow get Prince Charles to act like the lunatic he is, which will make the Duke of Sandringham disinclined to fund his cause. But at the mention of the duke, Claire looks like she’s going to throw up — and not because of the bitter cascara working its way out of her system. “I need to tell you something: Jack Randall is alive,” she confesses, bracing for the worst as she explains that Randall’s brother is the duke’s secretary. But Jamie is elated. “You’ve given me something to hold on to, something to look forward to. And that is a gift!” he cries. He kisses her, he kisses the bump, and it’s super cute until you remember that his joy is fueled by thoughts of giving Randall a bloody, violent end. And all of Claire’s worry that he’d skip off to Scotland to do the deed were unwarranted: Jamie assures her he’s not going to abandon their plan to take down Prince Charles. So… yay? 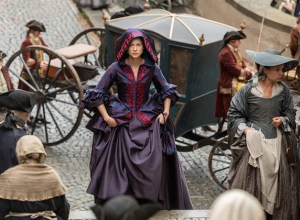 RAYMOND’S REVELATION | The next day, Claire puts on an absolutely to-die-for blue hooded jacket with red embroidery (check it out at right), then visits Master Raymond, who says he sold bitter cascara to a servant, but he’s not sure whose. He pulls her into a back room, explaining that the king is not a huge fan of the mystical arts, then does some divination and tells Claire she’ll “see” Frank again someday. She’s baffled, but keeps quiet; he gives her a pendant that changes color in the presence of poison, as a safeguard for the future. Oh, and he doesn’t come right out and say it, but he totally knows she’s not of this time.

LOVE BITES | On a subsequent evening, Jamie rolls in from Madame Elise’s place in a very good mood. A drop-yer-pants, climb-on-yer-wife good mood. And Claire is down to frolick… until she notices the bite marks on the inside of Jamie’s muscular thighs. His attempts to set her straight — nothing happened! Even though I wanted it to! But I didn’t do anything, because I wanted to come home to you! — fall on furious ears. “So you had to stir yourself up with a whore before you could bring yourself to be with me?” she asks, incredulous, hurt and angry all at the same time. He mentions that he’s been struggling since they arrived. Her face is rather unsympathetic. If I were you, Jamie, I’d duck behind the setee, because Hurricane Angry Pregnant Woman is about to blow into town, and she’s at least a Category 4.

She yells and cries about how she’s been going through her pregnancy all alone, evidenced by the fact that they’ve barely talked about the hatchling since they arrived in France. But Jamie’s carrying a burden, too. “I don’t think you understand what it’s been like for me since what happened at Wentworth,” he reminds her, his voice breaks just a little on the last several words. (Side note: How Sam Heughan didn’t get a Golden Globes nod escapes me; Emmys, you paying attention?) “Make me understand!” she cries, giving nothing. And then Jamie gives his “place inside me” monologue that actually appears in Book 1 of Diana Gabaldon’s series, but which I think serves this moment very well: Jamie’s not used to being so broken and raw, and he doesn’t even know how to ask for the help he needs.

FINALLY! | But the admission has changed something between the two of them. So later that night, Claire creeps into the room where Jamie’s sleeping, drops her robe and offers up a dose of sexual healing that he’s all too willing to accept. “Come find me, Jamie. Find us,” she whispers. (Side note: I’ve said it before, but I cannot imagine having the kind of co-worker relationship Heughan and Caitriona Balfe must share, given everything they do together on screen in general and his attention to her northern hemisphere in this scene in particular.) Afterward, he says he thinks Claire has helped his spirit build “a lean-to, at least, and a roof to keep out the rain.”

Speaking of roofs, Prince Charles just happens to be on theirs at that moment, escaping from Louise’s house, where he’s been bit by her monkey. Oh, and Charles and Louise are totally having an affair, and the pregnancy she tells Claire about earlier in the episode? The baby is his. Mark me, this is a mess. But the Frasers know it’s also the perfect lynchpin for their dinner-party plan.

AMBUSHED | On the day of the party, Claire takes Mary to L’Hospital des Anges, promising Jamie she’ll be back in time for the gathering. But a broken wagon wheel delays her return, so she, Mary and Murtagh walk home instead. Along the way, just after Mary has happily confessed that she and Alex Randall are secretly in love, a band of masked thugs assaults the trio. The men take out Murtagh first, leaving the women defenseless. Once the brigand trying to have his way with Claire realizes who she is, he cries, “Le Dame Blanche!” — or “The White Witch!” — and runs away, but not before she notes the odd-shaped birthmark on his hand. His comrades follow suit, but not before one of them rapes Mary. Claire cradles the inconsolable younger woman to her as they sit in shock.

Critics of this show/Gabaldon’s novels cite the use of sexual violence as lazy writing at best, and deep misogyny at worst. And while I don’t deny that watching an attack like Mary’s is upsetting, it’s important to remember that rape was a very real threat for women at that time — and remains a very real threat for women in many parts of the world. Even in the United States, per the National Sexual Violence Resource Center, one in five women (and one in 71 men) will be raped at some point during their lives. So if you’re one of those viewers who likes to fill comment fields and tweets with “I’m quitting this show!” after events like this episode’s unfold, that’s your right — but perhaps you should think about supporting a group like Rape, Abuse and Incest National Network or something similar as well, aye? 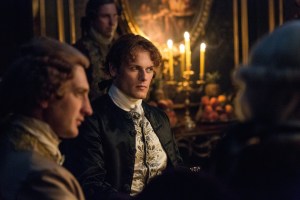 GUESS WHO’S COMING TO DINNER? | Everyone gets back to the house, where Jamie has been greeting guests solo. Suspecting that St. Germain — who has shown up as a guest of the duke’s — was behind the attack but lacking the evidence to prove it, Claire and Jamie decide to stash Mary upstairs with Alex to watch over her/administer her a sedative, then carry on with the dinner as though nothing has happened. (Plus, Jamie points out, going to the police will out Mary as a rape victim, and that will ruin her forever, socially speaking. Ugh. Go to hell, 18th-century gender norms!)

So Claire gets dressed and swans downstairs as though she’d just been taking an extra long time to make herself gorgeous. She perches at one end of the table, probably thankful now for those stays and laces, because I’m pretty sure they’re the only thing helping her keep her stuff together in front of her company. She and Jamie try to get Operation: Nutty Prince going by outing Louise’s pregnancy in front of the assembled guests, but a crash from the salon interrupts everything and sends everyone scrambling from the room.

Turns out, a drugged Mary freaked upon seeing Alex and flew downstairs, where he tackled her to try to stop her from running all over the house. In the commotion, Mary’s uncle starts hurling accusations, and pretty soon there’s a free-for-all in the Frasers’ living room. So the plan to discredit the bonnie prince not only goes south, but St. Germain offers to accompany Prince Charles away from the melee — meaning another unholy alliance is in the works. But Jamie whups someone with a curtain tieback, so that’s cool.