Though their circumstances, carnal endurance and cheekbones suggest otherwise, Outlander‘s Jamie and Claire are, in fact, only human. Isn’t it nice to see, as we do in this week’s episode, that a bit of stress and a lack of sleep make them as susceptible to the same everyday bitchery as the rest of us?

Perhaps my current situation makes me a little sensitive to this kind of thing: Having a 1-year-old daughter offers me many gifts, but an overabundance of patience is not one of them, and my by-all-measures-amazing husband sometimes becomes the unintended target of my exhaustion. So Claire, swanning around Versailles in the type of gown about which they write epic poems? Gorgeous, but unrelatable. Claire, out of sorts and arguing with her man, who could use a nap and a snack himself? THESE ARE MY PEOPLE.

This week’s episode also introduces Mother Hildegarde and Fergus, two characters from the book who become rather important as the season (and hopefully the series) continues. Read on for the highlights of “Useful Occupations and Deceptions.”)

L’ACTE D’AMOUR | As the episode opens, we watch what apparently has become a familiar scene at the Frasers’ French home: Jamie runs in after a late night with Charles at the brothel, quickly changes clothing and sets out for a day full of wine-merchanting and uprising-thwarting; Claire, meanwhile, lets on that she’s bored of having tea with Louise and the ladies. But at the moment, a distracted — and departing — Jamie is more concerned with his missing wooden snake keepsake than with his wife’s ennui. (Side note: Thank you, Outlander, for choosing to tell-not-show re: Claire’s morning sickness. That gross rat-stomping scene in the book lives in my memory; no need to see it played out.)

At least at Louise’s that day, there’s some fun to be had at poor Mary’s expense. “I can’t marry a Frenchman!” she blurts out during a game of cards, stymying Claire and Madame de Rohan. Mary haltingly explains that she’s become aware of how French men are in bed… and she’s so inexperienced that she doesn’t realize she’s just describing the basics of intercourse. Of course Claire wouldn’t know what she’s talking about, the younger woman quickly adds. “Your husband’s so gentle and so kind. He doesn’t trouble you in that way.” Um, Mary? There’s a whole episode of this series where all he does is trouble her “in that way.” Not that Claire minds… but that’s beside the point as she gently suggests that she and Mary have a private confab later. “Men don’t do things like that where I come from,” the teen says, embarrassed as Louise replies, “Where is that? The moon?!”

But Mary’s response — she’s from Seaford, England — jogs Claire’s memory of looking at Frank’s family tree during their time in Scotland. And suddenly she realizes that’s why Mary’s name sounded familiar to her: In 1746, Mary Hawkins will marry Jonathan Randall, making her one of Frank’s forebears. The very existence of Claire’s 1940s hubby, she voiceovers, relies on Black Jack staying alive for at least another year, which is yet another reason to keep his non-dead status from Jamie, who’d surely set out to kill him.

ALLIES ONCE MORE | The strain of new information puts our preggo protagonist on edge: After snapping at Murtagh, whom she finds bedding her lady’s maid Suzette, she apologizes and explains everything she’s learned — and why she can’t share the news with Jamie.

She’s a little surprised when he agrees. “You’re keeping a secret to save his life,” Murtagh says, adding that he’ll keep mum, too, in order to prevent Jamie from scooting back to Scotland — where he’s still a wanted man, remember — and winding up dangling from the hangman’s noose. There’s a shade here of the Claire-and-Murtagh-against-the-world that we saw during their traveling performer days last season, and I’m not mad about it.

PARIS MED | Claire crosses paths with Le Comte St. Germain during an outing to Master Raymond’s shop; she’s suspicious that the apothecary would be so cordial to someone he recently called an enemy, but he waves that away, citing business necessities. Claire is there to get birth control for Suzette, likely because the idea of bearded baby Murtaghs harrumphing all over the house doesn’t suit her, but she perks up upon learning of a charity hospital in need of volunteers. (Side note: Pay attention to that bit about bitter cascara, because it’ll become important later on in the season.)

So Claire travels to L’Hospital des Anges, which is run by a stern nun named Mother Hildegarde, whose pooch Bouton is always at her heels. Mother H. is dismissive of Claire at first, giving her chamberpot duty, but after Claire diagnoses diabetes (by tasting a woman’s urine), the sister starts to look at her with respect. Meanwhile…

IN WHICH JAMIE IS A GRUMP | Through sheer will and chess savvy, Jamie gets French finance minister Duverney to agree to an off-the-books meeting with Prince Charles at the brothel. But things go south when, instead of denying Charles the money he’d need to mount the Jacobite rebellion, Duverney becomes entranced by the idea of brokering an alliance between France and England once Charles’ father becomes king. Even worse, the bonnie prince says he’s got several English aristocrats who are willing to pony up most of the money, meaning his coffers aren’t as empty as Claire and Jamie had hoped.

The whole thing puts Fraser in a terrible mood, which is made worse when he returns home and Claire isn’t there. She eventually does return, bubbling about scrofula this and pee-tasting that, but he immediately snipes at her about how she’s putting the baby at risk. She isn’t doing anything to jeopardize their child, she says, hurt that he’s not excited for her. “I need a purpose,” she argues, adding that her options are limited thanks to her gender, but she’ll help their cause however she can. Jamie coldly responds that one way she could’ve helped was by being home to talk things over with him, but “you were out indulging yourself with poultices and potions.” Dude, those poultice and potions have saved your biscuit on more than one occasion, so how about you simmer down, aye? 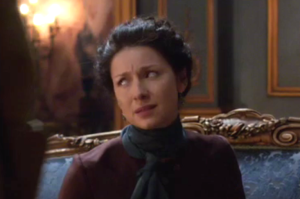 Moving into the anger stage, Claire counters that she was helping people, and that doing so makes her feel good. “When do I get to feel good?” Jamie growls, and stalks off. From the hallway, Suzette whispers to Murtagh that the Frasers haven’t had a good role in le hay in a while, which likely isn’t helping anything. (Side note: Rewind the scene to watch Claire’s eyeroll — pictured at right — when Murtagh offers his little I-told-you-so. So great.)

INTRODUCING FERGUS | James Alexander Malcolm MacKenzie Fussypants takes his frustration to the brothel, where he drinks and watches a young pickpocket rob the drunken customers of their money and trinkets. It gives Fraser an idea, so he chases the boy into the alley and — after a bit of confusion — offers the “wee fool” a job. “From now on, you’re going to do all your stealing for me,” Jamie informs him, mildly shocked when he realizes the boy lifted the aforementioned wooden snake off him at some time in the recent past.

So he brings the boy home in the early hours of the morning and informs Claire that Fergus — whose real name is Claudel, “but we decided that didna seem very manly” (heh) — will live with them from now on. I remember Claire’s reaction to their new charge as being more genial in the book than it’s portrayed here, but I do think the new treatment works in terms of where the couple is, emotionally, at this point in the series’ narrative: They’re so not on the same page that he alone decides they’re essentially adopting this kid, and the conversation they have about the matter is conducted with each of them in separate rooms. (Nice direction there.)

THE PHONY EXPRESS | Fergus steals letters to and from Prince Charlie, which Jamie, Claire and Murtagh copy and then replace before anyone’s the wiser. Many are in code; one is a piece of music in German, which Jamie takes to Mother Hildegarde for help translating. Thanks to the nun, the Frasers realize that “The key is the key,” and the decoded letter reveals that though Charles exaggerated how much money he has at his disposal, the English conspirators are very real. The missive is signed “S” — “Sandringham!” Mr. and Mrs. Fraser deduce simultaneously; their mission’s first substantive lead becomes cause for celebration and an easing of the tension between them.

But Claire’s faking her merriment, because she knows what will happen next: Jamie will want to meet with the slippery aristocrat to try to convince him not to fund the prince’s foolish war, and that means that Jamie will almost surely meet Alex Randall and learn that Black Jack lives. Murtagh urges his godson’s wife to ‘fess up, but when Jamie returns to the room and asks her what’s going on, Claire wusses out for perhaps the first time since we’ve met her. “I just love seeing you so happy,” she covers, leaving Murtagh to narrow his brows and shake his head in disappointment.

Now it’s yer turn. What did ye think of the episode? Is anyone else wondering how they can work a mustard-colored cape into their spring wardrobe? Sound off in the comments!