Warning: This post contains spoilers for both Saturday’s episode of Outlander and a plot point that would take place in a potential third season of the Starz series. If you don’t wanna know, it’s time to go!

Nell Hudson surprised viewers of Starz’s Outlander — and readers of the Diana Gabaldon novels on which the series is based — by showing up as malevolent meddler Laoghaire in Sunday’s episode.

Know who else was shocked at the young Scot’s return? Hudson herself.

“I was surprised, too!” the actress tells TVLine. “Because she’s not in the book!”

Hudson is referring to Dragonfly in Amber, Gabaldon’s second Outlander novel and the source material for Season 2 of the TV series. Laoghaire is introduced in Book 1 as a young lass whose infatuation with Jamie Fraser has near-fatal consequences for his lady, Claire. After that, the blonde “besom” — Jamie’s words! — doesn’t appear again until Voyager, aka Book 3.

We chatted with Hudson about Laoghaire’s new path, whether it’ll stick and what she’s looking forward to most about her next go-around on the show.

TVLINE | Like you said, in the source material, Laoghaire doesn’t show up again until the next book. Did you know what your storyline would be for this visit?
No, absolutely no. I found out [unintel] And she said you’re invited to go back on Outlander, and I said what? [Laughs] … I in fact called everyone at Outlander and it was true. But I had no idea what the story was going to be. It was news to me. [Laughs]

TVLINE | You have one of the most thankless roles on that show: You play the woman who not only actively wants Jamie, but who also tried to take down Claire. What has your experience been with the passionate fanbase?
Twitter is my main gauge for how Laoghaire is received. The people who follow me are people who love to hate Laoghaire. And the people who take it as far as hating me because they hate Laoghaire just don’t follow me! [Laughs] So I don’t get too much trolling or anything. People have been able to make the distinction between me and the character — thank God!

TVLINE | This episode allows you to play Laoghaire as a bit more comedic — I’m thinking of the scenes where she’s trying to seduce young Simon — rather than the heavier stuff you had last season.
Definitely. It was a lot of fun to do. [Laughs] I’m really sorry they didn’t keep it in, but we kept on going after the scene cut, to continue that awkward conversation of Laoghaire trying to flatter him and get him around her little finger. 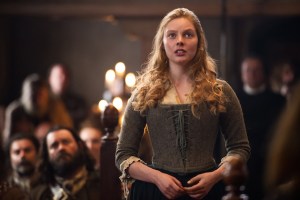 TVLINE | When we see her again, she seems contrite, almost pious in her desire to get Jamie and Claire to forgive her. Were you playing her as though she has an ulterior motive?
I think that she is genuinely striving for humility and penitence, and most of all forgiveness. But it’s just that her love for Jamie never [goes away]. I do think there’s a transformation that happens in the episode… When she sees him again and is thwarted by Claire, it’s a bit of a slap in the face. It’s a bit like, “Screw it, all this hard work and piousness.” …I think she does mean it in in the beginning. She’s fully in earnest, asking for forgiveness in the beginning of the episode.

TVLINE | I spoke with Sam Heughan after Laoghaire and Jamie’s scene by the stream last season, and he said that if Claire hadn’t shown up, your characters probably would have ended up together.
Aww. [Laughs]

TVLINE | Have you ever considered how different Laoghaire’s life might’ve been if Claire wasn’t around?
Well, yeah. Those who know what happens in [subsequent books], when Claire’s not around, it’s opportunistically a sure thing between Jamie and Laoghaire, in a way… I didn’t know that he had said that! [Laughs] There’s a sort of purity to Laoghaire’s love for Jamie. Despite all her [scheming], she’s not a bad person, really. Had a parallel universe happened, maybe there’d be a happy ending for Laoghaire and Jamie.

TVLINE | As you mentioned, those who’ve read the books know that Laoghaire shows up in Voyager, which would likely be covered in a potential third season. Are you looking forward to shooting those scenes?
Absolutely. I’ve been reading the books in the hopes that a third season comes to fruition. I’ve been laughing my head off that Laoghaire has kind of let herself go, she’s overweight and kind of tired-looking and haggard. I would love to play that. As a young actress, it’s not often that you get the opportunity to do character roles. And in the [next] book, it’s like [Laoghaire] becomes a character role. I think it would be a joy to do that. I think it would be hugely amusing. And she is married to Jamie. [Laughs] It’s not an entirely bad situation.