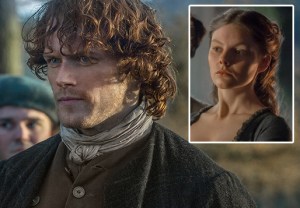 If it looked like Jamie wanted to kiss Laoghaire in Sunday’s Outlander, star Sam Heughan says, that’s because he did.

The episode included a scene not found in the Diana Gabaldon novel on which the Starz series is based; in the interlude, Heughan’s character is confronted by Laoghaire MacKenzie, the 17-year-old who thought she was Jamie’s main squeeze… until he showed up married to Caitriona Balfe’s Claire.

In an effort to capture Jamie’s attention, Laoghaire (played by Nell Hudson) follows him to a quiet spot in the woods, reveals she’s wearing a corset — but not much else — and suggests that he disregard his newly sworn wedding vows.

And Jamie, whom many fans of the novel and the series alike tend to regard as a perfect male completely devoted to his very new wife… seems to come thisclose to agreeing to Laoghaire’s plan.

“I think he’s absolutely tempted by her,” Heughan tells TVLine. “He has past history with her.”

Blasphemy!, you cry? Yeah, Heughan has heard it — and knowing that the sentiment is an unpopular one, the actor nonetheless defends Laoghaire’s actions.

“She’s totally misunderstood,” he says. “I’m going to get shot down in flames now, but she’s a good girl. It’s really sad, this young love that she feels. Had Claire not turned up, he probably would have been with her and ended up with her.”

He adds: “Jamie’s whole life and whole path certainly would have been very different had Claire not showed up.”

Heughan also teased that the remainder of the season would see great changes in young Mr. Fraser.

“We see him grow up drastically in this second part of the season. He faces a lot of responsibilities,” he says. “He has a duty he has to fulfill, a lot of problems with the clans and the politics there. It’s certainly about a man growing up.”