War wouldn’t be war if it didn’t snatch away someone we love hold in high esteem enjoy having around for comedic effect, and therefore this week we must say goodbye to Outlander‘s own goodhearted jackass, Angus.

Rupert’s platonic life partner meets his sad end in an episode named after the Battle of Prestonpans, in which the Jacobite Army routs the Redcoats. This victory feeds Prince Charles’ delusions of grandeur at the same time it cements Claire’s sickening suspicion about what’s to come: Because she was right in remembering history this time, it’s likely she’s correct about the blood, mayhem and crushing Scottish defeat that will take place when the soldiers march to Culloden Moor at the end of the season, too.

But we’ve got belly wounds, peeing contests and Dougal’s ego (again!) to deal with before we get there. So read on for the highlights of “Prestonpans.”

A DIFFERENCE OF OPINION | While heeding nature’s call during a ride with Jamie, Claire comes across a dead and rotting Highlander in the woods. Via voiceover, she ruminates on how many men she’s seen perish in battle and grows rather despondent until she’s interrupted by Jamie, voicing the sentiment of significant others on road trips anywhere, anytime: “Claire! How long do you need to take a simple piss?” (Side note: Because I am 5 years old, Sam Heughan’s pronunciation of “pish” makes me giggle.)

But the laughter stops once Jamie attends Prince Charles’ war council, in which half of the men want to march over to the very nearby British encampment and wreak havoc, and the other half (including Jamie) realize that the boggy ground between the armies is likely to cause serious problems for horses and the men who ride them. The prince starts spouting off about how the Brits are their brothers, and why can’t the whole thing be as civilized as a polo match?

The council ends without coming to any real conclusion, but the royal later pulls Jamie aside and asks him to tell Claire — who’s in charge of the field hospital — to treat any wounded British soldiers before she treats any injured Jacobites. Y’know, in the interest of being gentlemanly and all. Fraser gently advises Charles to quit that noise, especially in front of the other Scots, who are a hotheaded bunch. The prince then calls Jamie Claire’s “lord and master,” which should be all you need to figure out that he doesn’t have a damn clue what’s going on. About anything.

BOGGY BOTTOM BOYS | Jamie meets up with his men, who are sitting around a campfire, bored. Angus keeps spitting his drink at another guy, and when the spittee tells him to quit it, Angus does it some more. Rupert guffaws. Murtagh’s eyebrows look on disapprovingly. The whole thing nearly comes to a duel — ugh, boys! — but Fraser’s got other things on his mind: He needs someone to test the boggy ground, and he says just the right things to get Dougal to volunteer, in order to prove his “mettle” to the prince.

So Jamie’s uncle rides out into the danger zone, realizes the ground is too soft for the army to cross, nearly gets his shiny dome split open by a British bullet, and rides back to applause and general merriment. When Dougal dismounts, Prince Charles hugs him inappropriately long and close, and it’s kind of funny.

A PLAN APPEARS | Soon, a young man shows up who says he’s the son of the man who owns the land on which both armies are camped — and he’s willing to lead the Jacobites down a secret path to help them bypass the bog and attack the British. Jamie is in favor of doing so, and when the prince concurs, it’s time to get ready for battle!

Angus spends the early part of the night trying to bequeath his earthly goods to Rupert, who superstitiously refuses to accept them, saying that neither of them is going to die. Meanwhile, Jamie notices that Murtagh is nervously sharpening his blade, so he puts his foot up on a log, bares the ol’ Listening Knee, and listens to his godfather muse that fighting with so large an army means that “my death, your death alone would be meaningless.” All Jamie can offer is that he feels the same way, which gives the older man some comfort.

And then it’s time to go. So Claire grants Angus a goodbye kiss, tearfully asks Murtagh to watch over Jamie (“Always,” he assures her, which awwww), then the Frasers have a lingering kiss, Jamie bows, and the men take off. A while after they go, Claire panics when she realizes that Fergus is gone, too. 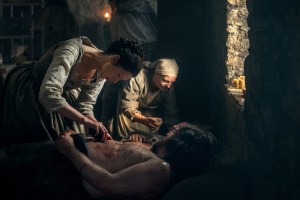 THE WOUNDS OF WAR | And that’s because the cherub-haired kiddo is marching with the rest of the men, who hoist their weapons high and stampede into the British camp at a foggy dawn, screaming battle cries and taking the Redcoats by surprise. There’s a lot of blood, a lot of bayonets, and pretty soon the first wave of wounded is showing up at Claire’s hospital.

Among them is Rupert, who got sliced up the side and who only survived a second round of carnage because Angus shot the British soldier wielding the sword. Despite being very close to a cannon blast himself, Angus carries his best pal to safety and watches over him as Claire stitches up Rupert’s oblique like it’s a football. After determining that Angus has a mild concussion at worst, she busies herself with other patients while Angus sits vigil by his bestie’s bedside.

Jamie eventually returns, Pixie Stick-giddy on the Scots’ victory. He and Claire have a happy, relieved reunion, but he quickly sobers when he sees his unconscious clansman. And Claire rushes outside to find Fergus unhurt but very much in shock, partly because he’s pretty sure he killed a British soldier during the melee.

Back on the death-strewn battlefield, Dougal is making sure that all of the fallen Redcoats are well and truly dead. One of the injured is the same soldier who accompanied the MacKenzie rent party back in Season 1; he asks Dougal for help getting medical attention but also notes that though the Jacobite forces won the day, they’ll likely lose the war. “Well, God alone knows the answer to that,” Dougal informs him, sticking his blade into the man’s gut and killing him. “And if so, I’ll look for you in hell.” Nice.

PISS AND VINEGAR | At the hospital, Claire notices a hoofprint on the back of Jamie’s shirt and her husband cheerfully recalls that a horse stepped on him during the fight. So she hands him a glass jar and instructs him to pee in it so she can tell whether or not his kidneys are bleeding. To break the room’s generally dreary tension, he jokingly tells a British captive to hold the receptacle “while I take aim,” and the soldier turns the endeavor into a bet that Jamie can’t hit the jar from a distance. So Lord Broch Tuarach is doing his thing, head thrown back, when Prince Charles enters — and because his back is turned, he doesn’t know what’s going on until he hears the royal’s effete voice behind him. (Heh.)

Charlie starts up with his “we are all brothers” thing, but it’s interrupted by a blood-spattered Dougal, who comes running into the room, shouting “Victory is ours!” and dry-humping the nearest nurse. When the MacKenzie war chief realizes there are enemy combatants in the room, he starts at them with his weapon… and then he realizes that the bonny prince is there, and mark me, he is displeased.

Only some sly diplomacy on Jamie’s part keeps Dougal from getting tossed from the army altogether. Once it has been established that he’ll head up a new dragoon squad — and therefore will be away from camp, scouting out the enemy — Ungracious D draws close to Jamie and whispers, “I know what you’re up to. You champion me, and you exile me at the same time. That’s a plan worthy of my brother, Colum.”

ANGUS, OUT | Before things can get stickier between the kinsmen, it becomes apparent that something is not right with Angus. He’s gasping for air and making a noise that sounds like your dog when you tell him to stop barking, but he REALLY wants you to know that the mailman is DANGEROUS and so he repeatedly growls so loudly that it’s one decibel away from a bark. That’s exactly how Angus sounds, and oh my, it looks like that cannon blast was worse than we were led to believe, after all.

Claire realizes that Angus has been bleeding internally this whole time, and there’s nothing she can do for him as he flails and essentially drowns in his own blood. There’s a little more growling, then the poor little guy is done for good. Just then, Rupert wakes and heaves himself out of bed with a giant groan, takes his dead friend’s sword — like Angus said he wanted the night before — and hugs it to his chest.

Jamie and Claire hold hands, Murtagh and Dougal look shellshocked, and pretty much everyone looks like they could use a hug. Well, and a shower. But first, a hug. Later, Rupert and Ross — another man who lost his buddy during the fight — drunkenly sing and tacitly console each other. Farewell, Angus. I didn’t expect you to go — in the book, it’s Rupert who succumbs to his battle wounds — but I do appreciate your devotion to the male half-updo, right ’til the end. (And make sure you read TVLine’s post mortem interview with Stephen Walters.)