Claire, we leave you alone for 11 months and this happens?!

Outlander‘s Season 2 premiere finds our Lady Broch Tuarach stumbling back into her present with a leaden heart and a whopper of a secret that nearly destroys her husband. No, not that husband. The other one, ol’ Sad Fedora Frank.

Claire’s return to the 1940s takes up most of the episode and nearly all of my emotional reserve; by the time both of the Randalls have processed the facts that Claire 1) has returned and 2) is pregnant*, I’m ready for a wee dram and a good lie-down, and Frank is ready to do damage to an old shed. Did anyone else sigh a loud “mo chridhe!” when we finally laid eyes on Jamie’s braw countenance? (Side note: Gaelic terms, how I’ve missed you!)

Read on for the highlights of “Through a Glass Darkly.”

ZERO HAPPY RETURNS | We open on Claire, in Scotland, back at the circle of standing stones known as Craigh na Dun. But something’s amiss: She’s agitated as she retrieves a ring from the ground in front of her, and soon she’s screaming with her fists curled in the grass. “He was gone. They were all gone,” she voice-overs. “The world I’d left only moments ago was now dust.” Am I a bad person because my obsession with her knitwear comes back in full force at this exact moment? Like yes, it’s becoming increasingly apparent that the love of your life has been dead for centuries, but at least you got to keep those sweet armwarmers!

She flags down a motorist and demands he tell her what year it is (1948, two years since she disappeared) and who won the Battle of Culloden (the British). The last answer undoes her, and och, it’s a tough thing to watch.

FRANKLY MY DEAR… | Frank arrives at an Inverness hospital soon after, where a doctor informs him that Claire is physically healthy but an emotional shipwreck. He’s clearly overjoyed to see her; she’s tentative and understandably weird around him. He brings her back to the Rev. Wakefield’s house, where she dives into the pastor’s sizable library of Scottish history, searching without success for any mention of whether Jamie survived the battle.

She’s also been talking to Mrs. Graham about Jamie: You’ll remember that the reverend’s housekeeper was into fairy talk and all that, and the older woman 100 percent believes what Mrs. Fraser Randall tells her about her trip through time. Meanwhile, Frank is stymied: The clothing Claire was found in in is verified as incredibly old, begging the question of where and how she got it.

Claire finally decides to share the truth with her husband, a task that takes all night. When she’s done, he says he doesn’t care: He’s all in, his gratefulness for her return trumping anything that might’ve taken place while she was gone. Claire bitterly reminds him that she was in love with another man, whom she married — “a point you have made several times,” he notes in one of the episode’s few lighter moments. He maintains, however, that he can’t understand her feelings for Jamie “but I can accept them.” But then Claire, who at this point clearly gives no effs about anything past the 18th century blurts out “I’m pregnant,” and Frank is immediately overjoyed… then devastated when reality sets in and he realizes the bairn is Fraserspawn. He balls his hand in a fist, he cries, he dies inside while we (and Claire) watch. In my notes, I write: “Tobias Menzies is SO GOOD.”

AN ACCORD | After trashing Wakefield’s shed in anger and grief, Frank cries as he confides in the reverend: He’s sterile, so there won’t be any children in their future if they stay together, and he doesn’t know what to do. Poor thing, this is a lot of emotion for a midcentury British man to process. But after a brief visit from Wakefield’s nephew Roger, still as apple-cheeked and cute as ever, Frank realizes that he might be able to be a dad to Claire’s baby after all.

So he offers her a deal: He’ll raise the child as his own, and she’ll quit searching for Jamie’s name in historical records as long as Frank is still alive. She agrees, there are a lot of tears on both sides, and he burns her 1700s garb — though she keeps wearing Jamie’s ring — then they board a plane for the United States, where Frank has a new teaching appointment at Harvard. Fresh start! As they disembark in America, Claire actually looks somewhat… if not happy, at least peaceful about having to stuff the very essence of her soul into a mental Rubbermaid tub, to be socked away like old college textbooks or those Rollerblades you swear you’ll wear again someday. Frank extends his hand to help her take the last step off the plane…

VIVE LES FRASERS! | … and OH THANK GABALDON WE’RE BACK IN 1745, and Jamie is the husband offering Claire assistance as they leave the boat that brought them to Le Havre, France. They talk about Jamie’s seasickness, then kiss, which in any other instance I might find a little gross (I’m sure he didn’t pop an Altoids as soon as they hit port, right?), but I’m just so happy to see Claire glowing like a firefly around her man that I’ll allow it this time.

Jamie is still rather beat-up following Randall’s rape and the rough trip across the ocean, and the faraway stare he’s prone to these days is evidence that he’s haunted by what’s happened. Partly to take his mind off his plight, Claire brings up the idea of trying to subvert the Jacobite uprising; the idea is to change the future and possibly save the Scottish clans from near destruction by interfering with Bonnie Prince Charlie’s efforts in Paris to raise money for the Jacobite army.

The Battle of Culloden is happening in April 1746, Claire says, but unfortunately she doesn’t remember much about what happens in the lead-up to the fight. Jamie is wary of messing with things they don’t completely understand, and he’s not happy that “We’d be lying to everyone” by pretending to be Jacobite supporters in order to gain the access and intelligence they’d need, but he eventually agrees to Claire’s plan. 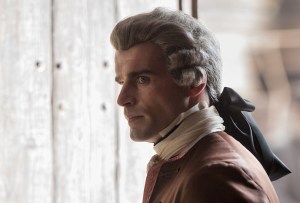 SHIP OUTTA LUCK | Three weeks later, they’ve secured lodging and employment in Paris — thanks to Jamie’s cousin Jared, a Jacobite himself — and have an understanding with Murtagh: He agrees to accept that Jamie and Claire can’t tell him everything in exchange for their promise that they’ll tell him someday. There’s a lot more gruffness in Murtagh’s part of the conversation than I’m relating; just picture bushy eyebrows knit together in skepticism, and you’ve got the idea.

But then a merchant ship full of sick men arrive in port, and when Claire publicly diagnoses the crew as suffering from smallpox, the harbormaster rules that the ship and its cargo must be burned. Le Comte St. Germain, the businessman whose wares were on the vessel, is NOT pleased about all the money he’s losing — thanks to Claire; as Jared notes, “You’ve made an enemy here today.” Oops.

* If you haven’t read the books and can’t figure out why Claire seems less pregnant in the jumped-ahead timeline than she does in the France scenes, don’t worry. All will be made clear… eventually.

Now it’s your turn. What did you think of the episode? For you Oldlanders, wasn’t Frank drawn much more sympathetically in the series’ reunion scenes than he was in the book? And how do we feel about Season 2 starting in the 1940s, which it didn’t in the novel? Grade the premiere via the poll below, hit the comments to tell us what you thought!