Outlander‘s Stephen Walters might’ve thought he was safe. After all, in the Diana Gabaldon novel on which Season 2 of the Starz series is based, Rupert — not Angus — is the recipient of a fatal, wartime wound..

But as viewers saw in Saturday’s episode, Walters wound up pleating his plaid one last time when Angus died of undiagnosed internal bleeding at Claire’s field hospital after helping a wounded Rupert back to safety.

“To be honest with you, because they’ve taken such a divergence in the first place from the actual character in the book anyway, it didn’t surprise me,” Walters tells TVLine. Given that Angus is called “huge” and “massive” in the novels, “in terms of just casting me as Angus in the first place as Angus, from the physical description in the books, nothing surprised me,” the actor adds.

In a recent chat, we talked to Walters about doing (fake) battle at Prestonpans, forecasting Rupert’s near future and the surprising way he spent time between takes while shooting Angus’ bloody exit.

TVLINE | How early on did you know this was going to happen, that Angus would die this way?
I actually find out by reading a script that was sent to me and I was kind of like ‘OK.’ Then it was explained to me, the backstory, about how the character of Willie, they were intending to kill that character, but then the actor who played him was contracted so he had to bail out on a second season and I guess I took the bullet. But these things happen, and I’ve said before, I take a great positive from it; it’s a brilliant show. We were all gonna die at some point and in a way Angus gets his own dead as opposed to maybe, I don’t know what they were thinking, dying generically in battle. So I think Ira Behr, the writer, did me a real favor there by writing me some lovely moments in my final episode and giving the character his own arc and ultimately his own end.

TVLINE | Tell me a little bit about filming the battle scene. How long did that take?
I think it was full on a week or maybe more, 10 days. It was a long time. We just felt like we were in a huge marquee tent for a lifetime. It was pretty intense, as you would imagine, it was like thousands of the extras and thousands of step-ups, so these things take time to get it right and get the details, but if it looks good than it’s worth it.

TVLINE | Was it as physically exhausting as it looked?
It’s cliché of any filming, a lot of the time the standing around is the exhausting bit. When you’re running down a hill with your top off in the freezing cold then you think you’re doing something. It’s a kind of strange avenue really. Was it tiring? As tiring as any other long day. I think when you do fight scenes and battle scenes, I think most actors will tell you it’s an enjoyable process. So me, personally, I quite enjoyed it. 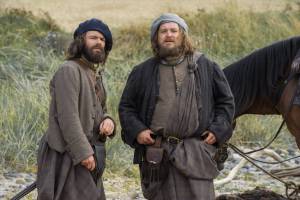 TVLINE | Angus and Rupert were one of the cutest “couples,” so to speak, in the show the way they cared for each other. How do you think Rupert will be in the wake of Angus’s death especially because Angus basically saved his life by getting him to Claire in time?
I don’t know. I hope he’s devastated and I hope he cries himself to asleep every night, because if he’s a true friend he will, and I’m sure he does. I talked to Grant [O’Rourke], and he was saying the rest of his lines in the following episode just tend to be a lot of how he’s mourning the missing Angus and that he’s not quite the same.

TVLINE | Did knowing that Angus wasn’t going to make it out of the episode alive help your portrayal of him in the episode?
Yes, it did, because itgave it a definite finality and I feel blessed enough that the character had its own story, its own end and its own finish. It’s kind of fitting that it should be with the character of Claire, given that for most of the time I was on screen, I was either goading her or picking on her. And in the end, she kind of came around to him, or he came around to her. It’s fitting that it should be that he died in her arms. It’s a nice touch, an ironic touch.

TVLINE | You and Grant have been responsible for a lot of the show’s comic relief in the first two seasons. Did you ever get to ad lib, or were all of the jokes and funny moments on the page?
For me, it was a retrospective thing, the humor came through from all of the people observing it, which is a really lovely bonus, but it’s not something I pre-conceived going into it. I like to think there’s a chemistry there and the fans seem to think so, so I’ll take that.

TVLINE | Are you at all bummed that Angus won’t be in the Battle of Culloden which this whole season has been leading up to?
Yes. [Laughs] My one gripe for the character would be is if he was at Culloden, he would be at the front. There’s no doubt about it: He would be right at the front, and he would be charging as well. It’s just the way it goes. He would have certainly died through a battle, fighting for his honor and his people. Same ending, but different battle.

TVLINE | Tell me about shooting your death scene. Did you do it a bunch of different ways?
They saved my death for the final shot. We had one go at it, maybe two… As for filming the death scene, I have to say, everything that needs to be said about Caitriona’s already been said, but even in that scene, I watching Cait’s performance… and it was real tears. It was moving to watch, and it was a kind of fitting end. A bloody end.

TVLINE | What was the mood like between takes? Did you stay in character, did you joke around?
I wish I had the skill to joke and just turn it on. That’s a specific kind of gift and an ability that I don’t possess. I kind of have to stay in my own little box and block things out until it’s finished.

TVLINE | So it’s pretty heavy between takes?
For me it is. 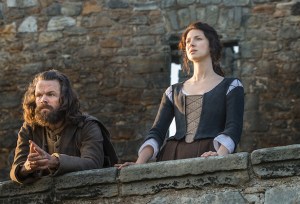 TVLINE | It’s a rather gory way to go, suffocating on your own blood. How much of your fake blood did you have to have in your mouth while you were filming?
Quite a lot. It was a mouthful each time, and it was a lot of pressure with something like that. Because there was so much blood — obviously for continuity and makeup, you had a turn around of two hours — and you had one go at dying, and then you look at it and go again. The pressure was on, but a nice pressure in a way, because it forces you to find that focus and be in the moment and hopefully get it right… It’s a two hour turnaround before you get another go at it, because you have to change your costume, clean your beard, get all of the blood out of your hair and even clean the set floor. In that death scene, I was actually in between takes comforting Cait, because she was actually crying. It was quite moving, actually.

TVLINE | I imagine it was very hard for the other cast members to say goodbye to someone they had been working with for so long.
Yeah, I think that’s why it moved me. When you get in your head and in your own zone, you don’t tend to think outside of that and I think that when I saw that reaction, I kind of realized that actually and it was neat.

TVLINE | I can only imagine how long it took you to get that fake blood out of your beard.
Too long. I think I had red patches under my beard for about the next two weeks. It was like a red, hairy lollipop.