Any way you cut this week’s Outlander, the Duke of Sandringham comes out a head.*

The British aristocrat’s keen survival instincts fail him in the final scene of the episode, during which Jamie and Murtagh crash into the duke’s kitchen and find him holding Claire against her will. And when Lady Broch Tuarach yells that Sandringham was the man who organized the attack on her and Mary in Paris, Murtagh swiftly steps to the weaselly man, kills him and then cuts off his head — thus fulfilling the vow he made to avenge Mary’s rape and Claire’s near-miss.

Callow tells TVLine he wouldn’t have changed anything about his stint as Sandringham. “I was just delighted to be asked to play such an outrageously bad man, such an elegantly bad man,” he says, adding that the part was “not a million miles from certain characters that one has played in classical plays in England, like restoration comedies and so on.”

In separate interviews, we spoke to both Callow and Duncan LaCroix, who plays Jamie’s kinsman Murtagh, to get their takes on the duke’s death. Read on for shenanigans with fake heads, the things Murtagh’s thinking about when he gets all quiet, and — of course — Jamie-as-universal-lust-object.

*This corny joke-as-lede is brought to you by my incredible love of Disney’s Jungle Cruise.

TVLINE | Talk to me about taking on the role of the duke. Did you know what he was up to from the get-go?
CALLOW | Well, I didn’t know what his destiny was. I thought I knew that he was going to die at the battle of Culloden, but I certainly didn’t know he was going to die the way he did die. It’s a very satisfactory way to die. It does seem that I have to die in everything I ever do. Four Weddings and a Funeral obviously being a case in point, and I’ve just done another movie where I dance myself to death. Perhaps there’s a very popular demand for seeing me die. [Laughs]

TVLINE | Murtagh keeps things close to the vest. We haven’t heard him mention avenging Claire and Mary’s attack in the last few episodes. Have you played it like it was weighing on him?
LACROIX | Yeah. I knew it was coming quite a ways off, from the books, that that was going to happen. Definitely after Mary gets raped in the alley, that’s something that settles very deep within him. As a matter of honor. If there’s one thing he can do, it’s look after the people around him. And when he fails at that task, that gnaws away at him. So when he finally does twig in that kitchen, that it was Sandringham behind everything, all those months of frustration [come to the fore].

TVLINE | Is it a challenge, given that Murtagh is such a taciturn character, to convey what he’s feeling in a scene?
LACROIX | I have it all going on internally. I think it’s nice sometimes for an audience sometimes when everything’s not on display with a character. It leaves that extra space for the audience to imagine or put themselves in the place of Murtagh. He’s that kind of character that by proxy, he’s closest to Claire and Jamie. He’s the character the audience identifies with, because they care about the characters as much as he does. 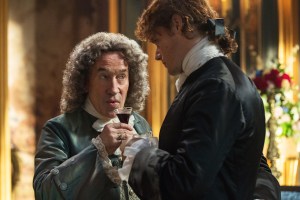 TVLINE | How much of the Sandringham we saw was in the script, and how much was your read on him?
CALLOW | It was all pretty well in the script. There was no call for any great leap of imagination, because it was so well written and so adroitly conceived. I really just had to convince the audience that my character was someone who was playing a game of chess, at which he was many, many moves ahead all the time… Every lies that he tells, he tells with perfect conviction. The only thing that was the real central thing, and I did try to play it quite strongly — it’s there in the book, too — he’s got the hots for Jamie, in common with most of the rest of the population. But he’s pretty frank about it, very candid about it, moreso in the first [season] than in the second [season], where there were a lot of comments by the Highlanders about his perverse lust. But what’s interesting is that Jamie doesn’t seem to terribly mind. Which is surprising. You’d expect such a great hunk to be a bit offended by it, but not at all. He seems to rather like flirting with the duke. It was lovely doing those scenes with Sam [Heughan]. He was very playful.

TVLINE | There’s a moment in your final episode where Jamie busts into the kitchen, and the duke immediately reaches for his wig and pops it on his head, as if he can’t stand Jamie to see him looking so casual.
CALLOW | Yes! [Laughs]

TVLINE | Was that in the script?
CALLOW | No, no. I’m proud to say that was my contribution. I really wanted you to see him without his wig. I was rather keen to be decapitated with my wig on, but it had to be that I was decapitated without. Because they couldn’t hold it up otherwise. My head would’ve fallen out, which would have been amusing, but perhaps not in the right way.

TVLINE | Claire is the person we see get under the duke’s skin the most.
CALLOW | Yes. He likes her, of course.

TVLINE | It occurs to me that maybe part of it is that he’s not used to being challenged in this way by a woman?
CALLOW | Very probably not. As it happens, the 18th century was a time of witty women, so he might have been. But there’s something else about Cait [Balfe]’s character. He’s very intuitive and very smart, and he knows there’s something unusual about her. He doesn’t quite know what it is. He doesn’t know that she’s come from the 1940s. He does know that there’s something uncommon about her. That interests him, and he’s very fascinated by her. He wants to know more.

TVLINE | I have loved the evolution of Claire and Murtagh’s relationship in the past two seasons.
LACROIX | Yeah.

TVLINE | Would you call them friends now?
LACROIX | Definitely. The search cemented their friendship, the search for Jamie. Up until that point, he was still fairly wary of her, of the situations and the trouble that Murtagh and more specifically Jamie had been put through. He’s always seen, right from the outset, that she was the right woman for Jamie, as opposed to someone like Laoghaire. He admires strength. He admires straightforward, honorable behavior. He sees these qualities in Claire. He sees what she can do for Jamie, and they become family.

TVLINE |Please tell me that there were some shenanigans with the prop head.
CALLOW | [Laughs]

TVLINE | Did they cast you for it?
CALLOW | Yes, they did make a cast. They were very kind; because I’m claustrophobic, they did it in bits and pieces so that I didn’t have to go under completely. So I think because of the process, because I couldn’t allow them to do what they normally do, I’m convinced that the nose is bigger than my nose. I’d like to think that. [Laughs] I’m pretty certain. It must be the case that they erred. Otherwise, I disown that nose. But it is a bit strange to come face-to-face with yourself.

TVLINE | Power is a very important commodity in the last few episodes of the season. Dougal wants to be a leader in the Jacobite cause. Prince Charlie wants to put his father on the throne. What does Sandringham want?
CALLOW | He’s in it for the game. I don’t think he actually has an objective. To survive, obviously, and to survive as comfortably as he possibly can. But he’s irresistibly drawn to scheming. It’s the great game for him… That’s his pleasure in life. It’s his hobby. It’s his game. It’s his nature. And he has plenty of opportunity for it. He’s generally rather good at it. But of course it catches up with him eventually. There’s a devil-may-care quality about him. He certainly doesn’t want to die. But he risks a lot, sometimes just for the sake of a joke, he’s prepared to put his life at peril and sometimes he feels that he can’t resist a sharp, smart answer. And that gets him into trouble a lot.