Need to catch up? Check out last week’s Outlander recap for Season 2, Episode 11, “Vengeance Is Mine.”

What do you get for the couple who has… nothing, really?

Sure, a wedding registry is the least of concerns when it comes to the hastily arranged nuptials that take place in this week’s Outlander. But c’mon: I’m sure Black Jack Randall and Mary Hawkins could use something to mark the beginning of their terrible new union. How about a deviled egg plate? Or a stand mixer? Maybe some fluffy new towels with which to dry their tears?

It’s a frustrating, sad, anger-making hour that sets us up for the bloodiest battle of all — as well as the season finale. Read on as we recap the events of “The Hail Mary.”

ONE LAST STAB | Just outside Inverness, the Jacobite army is a bruised, bone-weary band of bràthairs who have been in retreat for five months, and it seems like the Battle of Culloden is still very much on the table. Or, as Claire’s voiceover explains: “Our worst nightmare was coming true.”

Claire seems despondent upon arriving at the camp, which is just a handful of miles from Culloden Moor. “All that work. All that plotting. How the bloody hell did we end up here?” she laments. But Jamie is a bit more optimistic. He sends Dougal to scout the British army’s location, then asks Murtagh to fetch the prince: There’s going to be a war council, and Big Red thinks he can maybe make Charles see reason, after all. 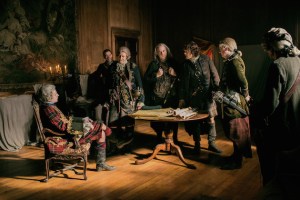 But can he make Charles see pattern? Because the bonny prince is wearing about seven of them at the same time, and it’s making my eyes cross. Anyway, Jamie does his best to convince the royal to hold off on attacking the Brits, going as far as to mention the gold that’s rumored to be on its way from France; once it arrives, he reasons, they’ll be able to regroup and be much stronger than they are now. (Side note: Remember this moment, because the gold becomes verra important later on in the books.) “I am weary of retreat,” the prince says, and Jamie’s face falls like a soft summer rain. “The men will rest, and then we shall march to Culloden.”

RANDALL REDUX | During a trip into town to pick up medical supplies, Claire runs into Mary at the apothecary’s shop. The younger woman is very cold to her friend; when she explains that she’s living there with Alex and she knows all about how Claire tried to dissuade him from proposing to her, at least Lady Broch Tuarach has the good grace to look chagrined.

Later, when Claire swings by the boarding house to examine Alex, she can hear him coughing from down the hall. He looks terrible — sweaty, pale, hocking up blood into a handkerchief — and not long after she gets over the shock of seeing him so deteriorated, an even bigger shock darkens the doorway: Jonathan Woolverton No Seriously Why Are You Always Up in Claire’s Grill Randall.

“So good to see you, Johnny,” Alex says from the bed, beckoning his brother closer. Apparently, Black Jack has been bankrolling Alex and Mary for weeks, ever since the younger man became too ill to work. And Claire’s got some more bad news for the couple: Alex is dying. Mary sadly counters with an update of her own: She’s pregnant.

A MODEST PROPOSAL | In a moment alone outside, Black Jack demands that Claire help ease his brother’s pain. But she wants British troop intel in exchange. “My, you would barter over an innocent man’s suffering?” he says with something akin to admiration in his voice. But he agrees, telling her where the Redcoats are camped. And though Jamie is Really. Not. OK. with the fact that Randall keeps popping up in their lives like a rapist whack-a-mole, he agrees that Claire should keep tending Alex — with Murtagh along as bodyguard.

During one of those visits, just after Claire has determined she can’t do anything else to help the younger Randall, Alex asks Jack to marry Mary in order to give her and the child the status and security afforded by his name. Everyone in the room looks horrified at the idea; Jack dismisses it outright. “You think I am unaware of the density of the dark wall you have built to protect your better self from the world?” Alex rasps at his brother, adding that he knows Jack can be tender and generous. Well, yes; and even Hitler was nice to his dogs. But the elder Randall won’t be swayed, and he runs out as an upset Alex has another coughing jag.

PACT WITH THE DEVIL | Claire tracks Jamie’s tormenter to his inn, where he’s getting drunk in the common room. She raises the idea of redemption, he brings up her cursing him with the date of his death — which is rapidly approaching — and then, for fun, he decides to talk about raping Jamie at the prison. “Did he never tell you the things I did to him in that room?” Randall muses, doubling down when she replies that he did. “I regret none of it… Do you really want Mary in my bed?” Eeeew. “If you love Alex, then I trust that love is enough to stay your impulses with Mary,” she replies coldly.

And before you know it, there’s a minister at Alex’s bedside, joining his brother and his lady as man and wife while Claire and Murtagh look on as witnesses. Eventually, Alex’s creaky breathing comes to a wheezing stop. As Mary cries and Claire holds her, Jack starts pounding on his brother’s body. At first I think, “Oh, he’s trying something like CPR.” But nope. It’s just rage and grief funneled through a truly demented brain.

Back at camp, Jamie’s a little horrified that Claire encouraged Mary to become Jack’s wife. “I encouraged her to become his widow,” she counters, adding that if history changes and he doesn’t die at Culloden, she’ll make good on her promise to help her husband “bleed” his nemesis. And Jamie looks equal parts amused and turned on by that sentiment.

COLUM, OUT! | Did I mention that Colum shows up in Inverness, in more pain than ever, looking to put a few things right before he dies? On his To Do list: Ask Claire to help him Kevorkian his way outta this mortal realm (check!); pass along the knowledge that Geillis Duncan’s baby, a boy, lived (check!); ask Jamie to be Hamish’s guardian and de facto chief of Clan MacKenzie until the boy is of age (check!); and royally tick off Dougal one last time (check!!!!!).

It’s hard to tell what irks Dougal the most: the fact that Jamie isn’t even a MacKenzie by name; the fact that he’s been passed over to raise Hamish even though the kid is his biological son; or the dig Colum makes about Dougal not being popular enough to win the hearts and minds of the clan members. And when Dougs angrily counters that Jamie will rally the MacKenzie forces to fight for the Jacobite cause, Colum wisely notes that their nephew will do that… unless he knows they can’t win. And in that case, he won’t needlessly sacrifice his men the way Dougal would.

When Dougal later comes to his brother’s bed to chat about what’s gone down, Colum muzzily says, ” I am beyond any injury you could do me.” And though we know that he’s guzzled the vial Claire gave him as if it were an XL Slurpee on a hot July afternoon, Dougal doesn’t know that. So the war chief gives a long monologue about how his brother has caused so much misery in his life, starting when he was injured and subsequently ill as a child. “I watched ye shrink, and I hated ye for it,” he says, Graham MacTavish doing a very nice job in the scene. “The world was never the same again. Ye destroyed it.” When he finally realizes that his brother is gone, he sadly realizes that everything he wanted to say “remains trapped in here,” he cries quietly, tapping his forehead.

THE PAST IS OBDURATE | One good thing to come from the Randall situation: Black Jack has given Claire intel, which is confirmed, about troop location and a good time to attack. So Jamie and one of the generals convince the prince that a two-pronged approach under the cover of night is a good idea, and FINALLY Charlie agrees. But after Jamie marches his men — who still haven’t eaten much — 12 miles, he learns that the prince’s group got lost and turned back. The battle called off, Murtagh and Jamie grimly commiserate: Culloden is on.

What did you think of the episode? Are you ready for the season finale? Did you love the little scene where Murtagh volunteered to wed Mary? Sound off in the comments!