I know I’ve repeatedly asked ye for help watching over my bonny wife — that Sassenach does get herself in some scrapes, aye? — but I feel the need to reiterate what I ask of ye in this week’s episode. Because if those enhanced drumbeats in the Outlander opening theme song are any indication, shite’s about to get real.

Like, not just “your buddy loses an eye” real. Or “you find out who ordered rapists to attack your wife and her friend” real. Not even “a guy gets beheaded in front of you and you barely blink” real. I’m talking the C-word: Culloden, aka the battle Claire and I have been trying to avoid all season, aka the battle we have failed to prevent.

Long prayer short, I need some help. And soon. Because even though the wee prince who claims to act in your name seems verra sure that we’re destined to lock arms with our British “brothers” and let bygones be bygones, the near-constant furrow in my bride’s lovely brow — not to mention all the chaos we encounter in this week’s episode — says otherwise.

Dear Lord, watch over us as we recap the highlights of Season 2, Episode 11: “Vengeance Is Mine.” 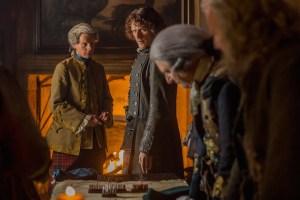 ALARMED FORCES | In the months since The Battle of Prestonpans, neither southern Scotland nor northern England — where the Jacobite army has set up shop — has joined in Prince Charles’ cause. The result: His army is dejected and running low on food, energy and morale. Still, the royal wants to press on. “London lies within our grasp. All we have to do is reach out and take it,” he tells his war council, who meet him with lots of dubious looks. Nearly all of his advisers want to retreat, but Jamie steps forward and, in a brogue so broad you could play squash on it, makes a huge show of kneeling before Charles and pledging his loyalty.

Claire is engaging in a little amateur dentistry with some of the camp members outside; that’s where Jamie dejectedly meets her after the council meeting is done. His push for London, as ill-conceived as it seems with a hungry and cranky army, was all about changing history: If the Jacobites are in the English capital, then they can’t meet their maker on the field at Culloden, right? Alas, it looks as though the Scottish clans are headed toward their date with death destiny, after all, and that makes Big Red promise that he’ll see everyone safe back to Lallybroch. He also doubles down on the vow he made Claire a few episodes back: “And you, Sassenach. I’ll see you safe no matter what happens.”

That “no matter what” is clearly on Jamie’s mind that night as he prays in Gaelic over Claire while she dozes. When she wakes slightly, they have a sweet moment as he spoons her and whispers about wanting to “watch you sleep in peace for a bit.” Jamie + bare-chested + concerned + playing off his concern so as not to overly concern his true love + Sam Heughan’s voice, which in this scene sounds as though it has taken a dip in whiskey, toweled off with a soft caramel and then stretched out languorously in a pile of coconut flakes? To quote James Joyce’s Ulysses: Yes I said Yes I will Yes.

OCH, EYE | The next day, though, Dougal is what you might called fashed: The prince’s council, worried that Jamie holds too much sway with Charles, is ordering Fraser and his men on to Inverness to nail down provisions and lodging for the retreating army. Or, as Dougal puts it, “exile.”

So Jamie’s men depart. Everything’s going fine until some Redcoats start firing on them while the group is resting by a stream, and then it’s chaos as people die, scramble, shoot back and take off, all at the same time. Jamie, Claire, Dougal, Rupert, Fergus and Murtagh ride away, but a soldier’s musket ball hits Rupert right in the eye, and only Dougal’s quick thinking/stunt riding stops his clansman from becoming ye olde roadkill.

The gang eventually takes shelter in an abandoned church, where Claire digs the bullet out of Rupert’s eye using only Fergus’ knife and gumption. It appears as though Angus’ pal will be OK and that he’ll be the 1746 winner of the George Weasley Prize for Inappropriate Humor After Losing a Body Part, based on the sheer number of eye jokes he makes during the rest of the hour. Still, that small joy is overshadowed by the arrival of British troops, who threaten to set fire to the building’s thatch roof if the Scots inside don’t surrender. 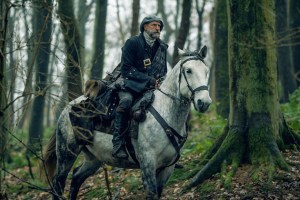 SPLITSVILLE, AGAIN | Dougal wants to stand their ground and fight. (Shocker.) Jamie wants to surrender himself, which will likely end in his hanging from a noose, but will also save everyone else. Claire wants to play hostage again — going as far as to shout “Help!” to the soldiers outside — but Jamie’s not down with that.

“Am I not Lady Broch Tuarach?” she counters passionately. “Are these men not my responsibility, too?” Whichi s moving and all, Claire, but maybe you don’t say so at the same volume you just used to yell to the Brits? Somehow, though, the soldiers outside don’t hear her, and Dougal prepares to carry her out to trade (along with the group’s weapons) for their freedom. “We will find each other. Trust in that,” she says to Jamie, making plans to rendezvous at the nearest British outpost, and they kiss before she joins the Redcoats waiting in the churchyard.

A BAD PENNY ALWAYS RETURNS | After an uncomfortable night at a tavern in a nearby town, Claire is surprised to hear that she’ll be unceremoniously dumped at the estate of a local Loyalist because the British army needs to move on. Thank goodness Hugh Munro — Jamie’s mute beggar friend we met in Season 1 — happens to be doing his thing outside the tavern, having seen Claire enter the night before. Between a whispered message and his hearing her talk about where she’s headed, the Frasers’ reunion is starting to look like more of a sure thing…

… until Claire arrives at the loyalist’s home and sees that it belongs to the Duke of Sandringham. As my colleague Michael Slezak would say: GASP! The bewigged aristocrat says nothing to out Claire as a rebel leader’s wife, but we later learn that’s because he’s sure Jamie is going to come rescue her, and he wants out, too.

Turns out the British are as unsure of his loyalties as everyone else is, and they’re keeping the house under watch. But he’s got a man who can get notes past the soldiers, so Claire pens a message in Gaelic and instructs him to get it to Hugh Munro, who’ll make sure Jamie sees it. (Side note: If wishes were ringtones, Simon Callow’s pronunciation of “blurrrrrrt” would issue forth from my phone forevermore.)

Oh, and did I mention that Mary is Sandringham’s goddaughter, and she’s at the house, too? Because she is, and she’s overjoyed to see a stymied Claire.

WATCH YOUR HEAD | OK, pay attention, because a lot of stuff happens in the relatively short time we have left. Claire notices that the duke’s valet has an odd birthmark on his hand and is, in fact, one of the men who attacked her and Mary in Paris. “She recognizes you!” Sandringham hisses, all pretense of civility gone. But just like that, he’s back to his old self, explaining in a very genteel fashion that he owed the Comte St. Germain a lot of money, and the comte wanted Claire dead, and so the duke arranged the rape to pay off a debt. “You really should be grateful” that the event was downgraded from a murder, Sandringham smarms at her. And then Claire’s spirits plummet as he adds that the Brits outside have made themselves scarce because he told them Jamie was coming, proving the duke’s loyalty to the crown, and they’ll trap him once he’s near. (Side note that has nothing to do with anything: Danton, the valet, has eyelashes a Disney princess would envy.)

Claire is locked in a room but escapes through a secret door — did the duke/Danton not know about it? — but winds up sitting in the kitchen with Sandringham, who catches her mid-exit. But Hugh has gotten the note to Jamie, and Mary’s a little more resourceful than I’d have given her credit for, and thanks to all of that, Big Red is able to bust into the kitchen. (I laughed lustily at Sandringham grabbing his wig and putting it on the moment he saw Jamie. Some habits die hard, I suppose.) Danton grabs Claire and holds a knife to her throat, but it doesn’t stop her from filling her hubby in on all the evil deeds the two men perpetrated in the City of Lights.

So while Jamie is punching the valet and throttling the wig off of Sandringham, Mary grabs a knife and sticks it between the ribs of the man who violently raped her/ruined her woman-in-the-18th-century future. And THEN Murtagh uses an ax to kill and behead Sandringham, picking up the duke’s noggin by its (real) hair and presenting it to a WTF?-faced Mary and Claire. “I kept my word. I lay my vengeance at your feet,” he says, but frankly, I’m distracted by the excellent work the sound effects crew did on this scene. You can hear nearly every single blood drip!

While everyone’s kind of looking around at each other in shock, Mary says, “I think we’d better go.” And that’s where we’ll leave the Frasers and their flock for now.