That’s really the only acceptable response to this week’s Outlander, unless your vocabulary and/or heritage means you’ve got a long stream of Gaelic curses handy for the yelling. Because good God, guys: Black Jack Randall is alive.

I don’t say that with surprise; like many of you, I’m familiar with the books and knew this moment was coming even before the first time Randall leered at Claire in the woods. Still, though, the mere idea that Randall lives — and that Jamie may eventually learn of his existence, too — is a juicy choice steak of a dramatic set-up, and I’m interested in watching Ron Moore & Co. slice into it with zeal.

Read on for the major events of “Not in Scotland Anymore.”

INTIMATE INTERLOPER | Lest you think you’d accidentally switched the channel to Food Network or something, this episode starts with Jamie and Claire making love in an energetic way that makes me happy my mom doesn’t watch the show. But as things are getting to their natural conclusion, Jamie imagines that Randall — not Claire — is underneath him, urging him “Don’t stop.” He grabs a knife and starts stabbing, and pretty soon it’s Psycho-shower-scene bloody up in this piece. And Randall won’t die!

Of course, he’s having a nightmare. And when he wakes up, sweaty and shaking, Claire’s reaction tells us that this is a semi-regular occurrence. She assures him that the captain is dead. “He’s alive in my head,” Jamie says, haunted. “I canna get him out.”

MEET MASTER RAYMOND | The Frasers have settled in Jared’s home in Paris; the next day, we see Claire head out to do some shopping in town. She winds up at the apothecary shop of a short, genial, slightly odd-looking man named Master Raymond. He calls her “Madonna” and refers to Le Comte St. Germain as his enemy; from the look on her face, you can tell Claire is charmed by him even though she doesn’t want to be. He gives her an infusion to help Jamie sleep, and a friendship is born. (Side note: Kudos to the set decorator, because Raymond’s shop looks exactly like I always pictured it, right down to the stuffed crocodile suspended over the counter.)

WHAT A PRINCE | Thanks to Jared, Jamie is invited to meet with Prince Charles at a local brothel. When James and Murtagh arrive, it becomes clear that Bonnie Prince Charlie is a weak-chinned, wine-swilling high talker whose proclivity to say “Mark me” when he really wants people to pay attention is rather annoying. He claims he needs straight-talking advisors, but when Jamie and Murtagh both tell him that the clans aren’t inclined to rally behind a man who’s never even set foot in Scotland, Charlie don’t play dat. “God demands that a Catholic king sits on the British throne,” he says prissily. “My father is that king.”

If there’s one thing you should take away from this scene, thanks to the phallic objects the prostitutes wave around like they’re party balloons, it’s that sex toys have existed for a long time. If you take away two things, also remember that Charlie needs Jamie to help him woo the French finance minister to help fill the Jacobite cause’s empty war coffers.

A HAIRY SITUATION | To make that introduction happen/thwart Charles’ prospects with France’s money man, the Frasers need an invitation to French Court. Enter Claire’s new lady friend, Louise, who flits about the Paris social scene like a naughty little butterfly. During a visit to Louise’s one day, Claire is lucky enough to score the necessary entrée to Versailles and witness the work of Louise’s personal waxer. Mrs. Fraser looks slightly scandalized as Louise opens her gates and allows the man to whack her weeds, but I’m guessing the shock wears off, because later that night Claire is eager to show Jamie her own sleek… self.

Sam Heughan’s face as Jamie’s fingers do the walking is hilarious; his use of the term “honeypot” to refer to Claire’s nether region, as well as his observation that said area is “more complicated than it looks, thatched over” is laugh-out-loud funny. Alas, not even the novelty of personal grooming can overcome the pallor Randall casts on the Frasers’ love life: When Jamie recalls flashes of his rape, the sexy funtimes are over for the evening, and he and Claire awkwardly decide just to go to sleep.

SAY OUI TO THE DRESS | Two weeks later, Claire and Jamie arrive at court with Louise and Mary Hawkins, the timid British girl she’s chaperoning until Mary’s arranged marriage in the near future. Claire is resplendent in a red gown that is as skimpy through the bodice as it is wide through the skirt; at one point Claire literally has to sidle into a room because her gown won’t fit through the door any other way. She is STUNNING. Even Murtagh is taken with her, an honor he only bestows on one other woman at the party, and she’s literally not wearing anything except swan-shaped nipple rings on her chest. 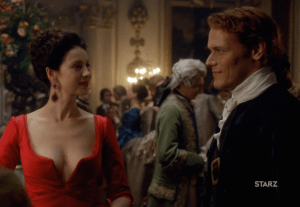 A pretty blonde woman runs up to Jamie, calling him “My petite savage!” as she enthusiastically embraces him. Her name is Annalise, and he fought a duel on her behalf — because he liked her — back when he was in France as a teen. The moment quickly turns awkward as Jamie introduces Annalise to his wife, and Big Red’s consternation at the situation is highly amusing. When you can, rewind the episode just so you can watch the looks Balfe and Heughan throw at each other throughout the scene. That, friends, is two people who know how to communicate the deep, wordless understanding great couples develop over time.

THE ROYAL THRONE | Annalise does prove useful, though, when she helps Jamie get an audience with the king. Unfortunately, it’s while the young monarch is actively suffering a bout of constipation… with a crowd watching him sweat and strain. Ew. “Only in France does a king need an audience to shite,” Murtagh wisely remarks.

After a misunderstanding in which the lecherous finance minister makes a drunken pass at Claire and gets dunked in a lake by Jamie for his efforts, everyone makes nice; it appears Jamie got the connection he desired with the man. The Frasers are happy… until they see the Duke of Sandringham across the room.

GUESS WHO’S BACK? | You’ll recall that the duke promised to help clear Jamie’s name last season, but then proved to be an ally of Black Jack’s after all. Jamie doesn’t want to make a thing of it, but Claire and Murtagh glare daggers at the man, with Claire later subtly threatening to out him as a Jacobite supporter — which the British crown would surely see as treason. But she should’ve know that the wily aristocrat would have the upper hand in the end: When he introduces her to his assistant, a young man she noticed earlier chatting with Mary, she soon realizes that 1) the assistant is Alex Randall, Black Jack’s brother; and 2) from what Alex says, his brother is still alive.

The news literally almost knocks Claire onto her bustled backside. Should she tell Jamie? Should she keep it a secret? As the fireworks burst over the gardens outside, she’s torn and upset… and I’m wondering how the heck that man survived a damn cattle stampede. I demand a re-cow!