“What’s a girl to do when she’s stuck between men? It’s like she’s a Barbie with two perfect Kens!”

These words may have been crooned by Crazy Ex-Girlfriend‘s Rebecca Bunch, but they’d apply just as well — perhaps even better — to the hottest love triangle Bayside High School has ever seen, as Zack Morris and A.C. Slater (briefly) battled for the hand of Kelly Kapowski.

And while many fans would agree that Saved by the Bell made the right choice by shifting Slater’s focus to Jessie (opposites attract!), we’re willing to bet there are a few of you out there who would have preferred to see him end up with Kelly. With that in mind, TVLine is looking back at these classic couples with new eyes to settle things once and for all: Did Kelly really make the right choice? 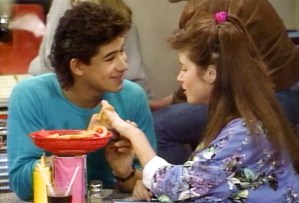 THE CASE FOR SLATER | On paper, head cheerleader Kelly and all-star athlete Slater made perfect sense as a couple, especially in the early ’90s when characters were happily defined by such labels. And despite his reputation as a macho meathead, Slater showed off his romantic side as he attempted to win over Kelly: he carried her books, showered her with onion rings and didn’t even balk when Zack tried to convince him that Kelly had leprosy. (“Hey, we all have skin problems, right?”) But most importantly, Slater played fair, whereas compulsive schemer Zack constantly resorted to underhanded deeds to impress her. Specifically, let’s never forget when Zack — who feared that Kelly would choose whichever guy got his license first — sabotaged Slater’s test car, causing him and Kelly to get into an accident. Don’t let that smile fool you, Zack was a sociopath. 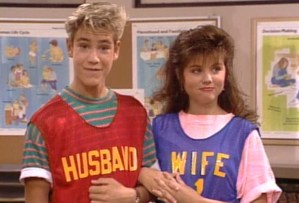 THE CASE FOR ZACK | That said, Zack was a charming sociopath, one who gradually earned Kelly’s affections through a series of (occasionally) selfless acts throughout the first few seasons. For example, when Kelly’s dad lost his job and couldn’t afford to pay for a prom dress, Zack organized a romantic evening for two right outside the school. Despite Slater’s best efforts earlier in the series, it was always clear that Zack and Kelly were fated to end up together, hence the couple eventually tying the knot in 1994’s Saved by the Bell: Wedding in Las Vegas. (For the sake of this argument, let’s also ignore that executive producer Peter Engel told TVLine that Zack and Kelly would probably be divorced today.)

THE CASE FOR JEFF | Just kidding. Jeff was the worst.

Take a few minutes to weigh all of the above, then cast your vote below and drop a comment with your rationale.