Over the course of Gilmore Girls‘ seven seasons (and four-episode revival), Rory Gilmore was hardly ever without a book — or a boyfriend.

It started with Dean Forester and that kiss in Aisle 3. Then, there was Jess Mariano, Luke’s rebellious nephew whose love of literature rivaled even Rory’s. And then, of course, there was Logan Huntzberger, a fellow Yale student who swept Rory off her feet in the dramedy’s later seasons. (Let’s all pour one out here for Naked Guy Marty, who never got a chance to be Rory’s beau, despite his best efforts.)

All told, Rory didn’t end up with any of ’em. When Netflix’s A Year in the Life revival came to a close, Rory and Logan had said what seemed to be their final goodbyes, and Jess had left Stars Hollow after giving Rory one last, longing stare. Dean, meanwhile, had moved on entirely — and with no disrespect to Doose’s finest former employee, we’re keeping the present discussion strictly to Rory’s latter two loves.

But who do you think was the best match for Rory: Jess or Logan? Before you weigh in on the debate, here’s our argument for each flame: 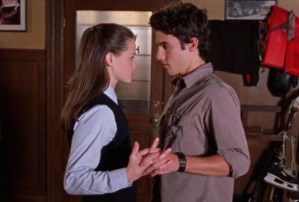 THE CASE FOR JESS | From the moment Jess returned Rory’s copy of Howl, vandalized margins and all, he and the youngest Gilmore girl had an undeniable connection. In the flirty months leading up to their inevitable romance, Jess challenged Rory in ways she didn’t experience during her relationship with Dean, whether he was pushing back against her love of The Fountainhead or pressing for details about her long-term journalistic ambitions.

Jess’ bad-boy appeal admittedly faded once he and Rory actually began dating; what started as a sexy, dangerous vibe quickly transformed into full-fledged boyfriend misbehavior, which came to a head when Jess kept his academic troubles from Rory and ditched her to find his dad in California. “Jess does not treat me like dirt!” Rory once yelled indignantly at Dean… but, for a while there, he kinda did.

Still, there’s ample evidence to suggest that Jess was the right guy for Rory after all. Despite his teenage screw-ups, Jess held Rory accountable for her decisions from Day One. He was the one to get Rory out of her comfort zone in Stars Hollow (even if that did, uh, result in a totaled car that one time); to call her out on her insane decision to drop out of Yale; and to motivate her to use her own life as inspiration for her next writing project. Assuming A Year in the Life is the last we’ll see of the Gilmore girls, we may never know how Jess and Rory’s story really ends — so for now, we’ll simply say, “I love you” to the idea of a happy ending for the couple, then quickly drive off without another word. 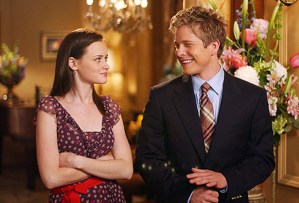 THE CASE FOR LOGAN | It may not have been love at first sight — or second sight, or third sight — for Rory and Logan, but the pair had a crackling chemistry from the start… even if the phrase “butt-faced miscreant” was being tossed around at the time. Eventually, their coy bickering gave way to a loving relationship, and Logan was a perfect match for Rory on multiple levels. (Exhibit A: “You Jump, I Jump, Jack” in its entirety.)

Yes, Logan is rich. And entitled. And, particularly when we first met him, an occasional snob. But Logan and Rory worked because they both needed to grow up, and they did so at each other’s side. They made, and had to pay for, some childish, bratty mistakes — a pre-Logan Rory Gilmore would never have stolen a yacht — but came out on the other side a more mature, honest, responsible pair. (It didn’t hurt that they could take the most fabulous vacations, you know?)

At the end of A Year in the Life, Rory revealed she was pregnant, and we can safely assume the baby is Logan’s, given their ongoing affair in the revival. (Uh, maybe that whole “mature” and “responsible” thing doesn’t apply to this paragraph.) But even though the couple parted ways in the “Fall” installment, we wouldn’t be mad to learn that Rory and Logan eventually find their way back to each other, no matter how many kropogs stand between them.

What’s your opinion on who Rory should have chosen? Log your vote in the poll below, then slug it out in the comments!