Soap opera fans have rarely been in as hot a lather as when General Hospital‘s Brenda Barrett found herself torn between mob boss Sonny Corinthos and Aussie tycoon Jasper “Jax” Jacks.

‘Twas a triangle that in one form or another, and off-and-on, would span some 17 years. During its many highs and lows and twists and turns, were you more often rooting for SnB or JnB? 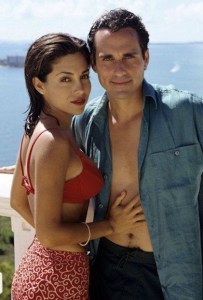 THE CASE FOR SONNY | At the age of 18, Brenda met club owner Sonny by way of Karen Wexler, and though they tried to ignore their spark, they could not — especially after deeply bonding when Brenda played nursemaid to a bullet wound of his. The first major test of their love came when Brenda, in denial about her beau’s mob ties, agreed to wear a wire… only to get caught. Sonny threw Brenda out and distracted himself with mob princess Lily Rivera, while Brenda found comfort in the arms of newcomer Jax. “SnB” was a resilient romance, however, and following a bit of Cave Sex, the two reunited, leaving Jax in the dust.

In the years that followed, Sonny and Brenda would endure her marriage to Jax, wayward murder attempts (Clink-Boom!), Brenda being framed for murder, the prospect of her having mental illness, Brenda’s “death,” interloper Luis Alacazar, drug addictions, a child Brenda didn’t recall allegedly having, an unread letter, Miguel Morez (just kidding!) and so much more. In Spring 2013, capping Vanessa Marcil’s latest encore as the fan fave, Brenda left Port Charles and Sonny, to return to her life in Rome (Italy, not Upstate New York). 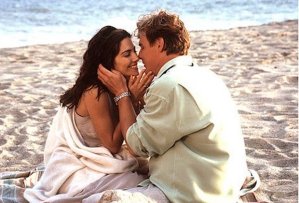 THE CASE FOR JAX | Brought to Port Charles to battle ELQ, Jax first set his sights on Lois Cerullo, who — being very married — pointed him in the direction of her BFF Brenda. Brenda in turn saw an opportunity to make Sonny jealous by way of the tall, non-dark and handsome Aussie, though over time she grew to have true feelings for Jax. Alas, what would be their first trip down the aisle was derailed by Sonny’s arrival with Jax’s “dead” (but only scarred!) wife Miranda in tow.

Some time later, when Brenda was stood up at the altar by Sonny, Jax helped her rebound from a breakdown and they got engaged again — though this time fate intervened by sending Brenda over a cliff in a car driven by her off-kilter mom. Jax wound up chasing after a look-alike, thinking his love was somehow alive, and Brenda would indeed eventually resurface in Port Charles, crashing Jax’s wedding to Skye Quartermaine. Brenda then get left at the altar by Jax (really bad luck with weddings, she has), who had learned his bride-to-again-be had smooched Sonny. Busted, Brenda left town. (But we thought, “Nobody leaves!”…?)

During her latest visit, to attend the 2013 Nurse’s Ball, Brenda revealed to Sonny that she was (again!) engaged to Jax, though she bungled that one, too, when Carly overheard her inviting Sonny to give them one more chance. Sonny declined the overture — and Jax called off another wedding — so Brenda returned to Rome.

And that’s just the broad strokes, folks. But with that said, and knowing everything else you probably know about Brenda’s roller coaster-like love life, tell us: