A long time ago, intrepid detective Veronica Mars used to be friends (with benefits!) with Logan Echolls and Stosh “Piz” Piznarski. And here’s a case we still haven’t solved, marshmallows: Which of the two was most deserving of the teen P.I.’s affections?

Ahead of the series’ upcoming Hulu revival, which begins streaming on Friday, July 26, we thought we’d reopen the investigation into whether Veronica’s high school sweetheart or her college honey was the boyfriend with whom she should’ve ended up. Both men offer up some definite pluses (passion spanning years and continents!) and regrettable minuses (early onset Dad humor!), and both truly cared about keeping Veronica safe and loved. So it’s a tough one: Read our dossiers on Ms. Mars’ wooers below, then make sure to weigh in with your vote in the poll at the bottom of this post. 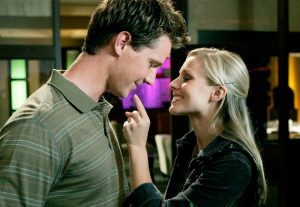 THE CASE FOR LOGAN | Sure, he was introduced as Neptune High School’s “obligatory psychotic jackass,” but Veronica’s sarcastic tormentor-turned-ally revealed himself as a person of deep emotion — and fiercely protective fists — when his friendship with the tiny blonde one turned into something much more. Sure, they were on-again/off-again for much of the series’ three-season run, but a little thing like a breakup wasn’t going to stop Logan from getting in between Veronica and a tattoo-happy crime lord… or a homicidal rapist… or even Piz himself, when Logan mistakenly believed he’d leaked a sex tape featuring the object of their shared affection. And by the end of the 2014 reunion movie, a more mature Logan returned to the Navy with the promise that his “epic” love story with V would continue when his duty was up. LoVe — the portmanteau fans use to refer to the couple — sure hasn’t been simple for these two, but hey: No one writes songs about the ones that come easy. 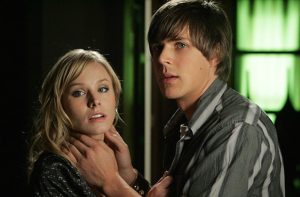 THE CASE FOR PIZ | It makes sense that, once Veronica got out of Neptune and tried for a normal life in New York, she was living with and dating Piz. Because Piz is the nicest of nice guys, the kind of dude you hope your sister will marry or your best friend will settle down with. When he and V first started dating while enrolled at Hearst, his biggest selling point was that he was the anti-Logan: even-keeled, non-violent, affable and completely without guile. He treated her well. He respected her boundaries. He dealt well with being repeatedly friend-zoned. In fact, Piz was probably the better choice for Veronica in the long run… his questionable taste in haircuts notwithstanding.

What’s your opinion on whom Veronica should have chosen? Log your vote in the poll below, then battle it out in the comments!