Veronica Mars fans, prepare yourselves for a summer of LoVe.

The latest trailer for Hulu’s upcoming revival of the detective drama has more Logan/Veronica (aka “LoVe”) content than we’ve previously gotten, and we’re about to go cruising in a yellow XTerra just to celebrate.

In the video, Kristen Bell’s titular sleuth and her sometime boyfriend seem to be meeting up after a long time apart; Jason Dohring’s Logan informs her that he’s “back for extended leave” from the Navy — to which he returned at the end of the series’ 2014 film — though we don’t find out exactly why.

It seems like the pair gets quite cozy during his Neptune visit, but (shocker!) it’s not all smooth seas for the sailor and his lady. Exhibit A: When Kirby Howell-Baptiste’s character Nicole asks “So what’s the destructive gene in your relationship?,” Veronica sadly replies, “I think it might be me?”

But matters of the heart aren’t Veronica’s only worry this time around, as evidence by the multiple explosions that fill the trailer. Is there a serial killer afoot in Neptune? Who is trying to destroy the city? And what does Big Dick Casablancas’ prison pal — we’re sorry, “friend and associate” — Clyde (Counterpart‘s J.K. Simmons) have to do with it?

Fans of the original series will be thrilled to see Veronica and dad Keith engaging in their usual banter, Dick deeming himself “King of Spring Break” (and later wearing some truly dazzling gold lamé pants) and the return of series standbys like Weevil, Veronica’s trusty taser and Logan’s fists.

Press PLAY on the video above to watch the new trailer in full, scroll down to see the official poster (click on the image to see it larger), then hit the comments with what you’re most looking forward to in the revival. 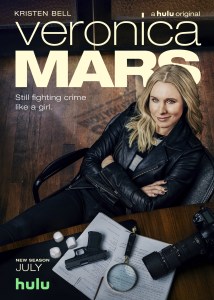