Light some candles and cue up The Fray, because TVLine is digging up the past to discuss yet another romantic entanglement we’re still not over.

It’s been nearly a decade since The Vampire Diaries introduced us to Elena, Stefan and Damon, arguably the hottest — and most contentious — love triangle The CW will ever witness. From sexual sire bonds to evil (or in some cases “misunderstood”) doppelgangers, these three went through it over the course of eight seasons. And while fate wasn’t exactly kind to all parties involved (R.I.P., Stefan!), the debate over which Salvatore brother deserved Elena’s heart lives on. 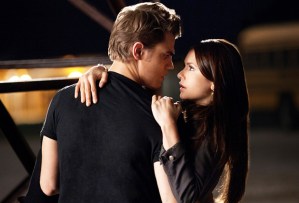 THE CASE FOR STEFAN | From the moment Stefan and Elena officially introduced themselves to one another in that graveyard — you know, where all true romances are born — their chemistry was off the charts. And Stefan had more than just a flawless head of hero hair; he also had a big ol’ heart, even if it wasn’t technically beating. Loyal to a fault and loving to no end, there’s nothing Stefan wouldn’t do for Elena, even after she definitively chose his brother over him. I’m pretty sure this quote, spoken by Stefan to Klaus towards the end of Season 3, says it all: “I’d turn my back on everything here just to make sure Elena is safe.” And he did. Multiple times. Even the civility of their final breakup proved that Stefan is a gem of a person: 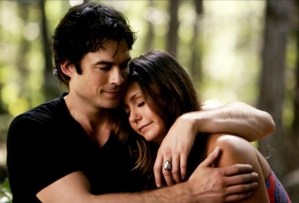 THE CASE FOR DAMON | Damon’s bad boy persona may have sparked Elena’s initial attraction, but it was the man behind the brooding bloodsucker that stoked the fire and earned her eternal devotion — you know, except for when she had her memory erased in Season 6… or when she remained in a coma-like state throughout Seasons 7 and 8. Seriously, when you think of all the storms these two weathered, including multiple deaths and “deaths,” it’s a testament to the strength of their connection that they lasted through the series finale. But I’ll let Elena’s own words explain why these two are built to last: “Being with Damon makes me happy. When I’m with him, it feels unpredictable, like I’m free.” And if that’s not enough, how’s about this little speech:

Give this triangle some thought — just in case you haven’t done so enough over the past nine years — then cast your vote below and drop a comment with your rationale.