The residents of Tree Hill, N.C., may have been beautiful, but their relationships had a knack for turning really ugly.

And never was that dichotomy of beautiful people and beastly behavior more evident than the seasons during which Peyton Sawyer (played by Hilarie Burton) and Brooke Davis (played by Sophia Bush) battled emotionally — and physically, on occasion — for the heart of Lucas Scott (played by Chad Michael Murray).

But before we start rehashing which girl should have ended up with the world’s most brooding, dead poet-quoting basketball player, let’s get something straight: This particular love triangle was a gut-wrenching experience for One Tree Hill fans, as it gradually disassembled one of the show’s greatest relationships — the friendship of Brooke and Peyton. I dare you tell me you don’t feel the slap in this video as if it was your own cheek:

Now that we’ve established that Brooke and Peyton’s friendship is more valuable than either potential pairing, let’s talk about who we’d rather see running their fingers through those luxurious frosted tips: 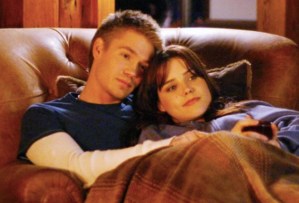 THE CASE FOR BROOKE | Like most characters on this show, Brooke was misunderstood from Day 1, though Lucas and those beautiful baby blues saw right through her cliché cheerleader facade. Before you knew it, “Brucas” was the it couple at Tree Hill High… until Lucas began an emotional (and more) affair with Peyton, triggering a series of unfortunate events, including Brooke lying about carrying Lucas’ baby after a pregnancy scare. They gave their relationship a second chance in Season 3, but Lucas’ inability to fully commit himself (emotionally) caused it to go down in flames. Again. Despite crying at the drop of a damn hat, Brooke was surprisingly mature, perhaps too mature to be dating high-school Lucas; had they met as full-grown adults, things might have worked out differently. 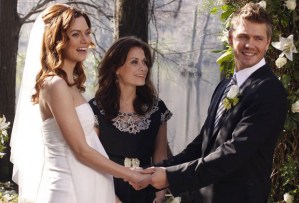 THE CASE FOR PEYTON | Which brings us to the lucky lady who did land Lucas in the end, the one he famously referred to as “the girl I want standing next to me when all of my dreams come true.” Even though Peyton was dating Lucas’ half-brother when they first met, these too-emo-to-function souls were destined to end up together the moment he showed up to tow her car in the pilot. No matter what curveballs fate threw at them — a school shooting, a psychotic stalker and a difficult pregnancy to name just a few — they weathered every storm together, proving that Lucas’ devotion to Peyton was stronger than any connection he’d previously shared with anyone. One Tree Hill was always about sappy endings, and what could have been sappier than Lucas finally marrying the love of his life a full decade after writing that dream down on a little piece of paper and hiding it in a brick wall? (The fact that Brooke served as Peyton’s maid of honor at their wedding is proof that everything basically worked out in the end.)

Are you glad Lucas ended up with Peyton, or are you still carrying a torch for “Brucas”? Cast your vote below, then drop a comment with your rationale.