If you recall the summer of ’92 as being a particularly steamy one, chances are that it had nothing to do with the weather and everything to do with that having been when Beverly Hills, 90210 constructed the Brenda/Dylan/Kelly love triangle — a hot-button topic among fans of Aaron Spelling’s primetime soap even now, more than a quarter of a century later. But today, TVLine is determined to settle once and for all the question of whether Luke Perry’s troubled teenage dream belonged with high-school sweetheart Brenda (Shannen Doherty)… or was a better match with her BFF Kelly (Jennie Garth)? Before weighing in, do consider… 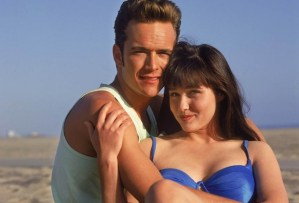 THE CASE FOR BRENDA | From the moment that Brandon’s kid sister met his sexy buddy, their chemistry was so sizzling that we were surprised they managed to put off going all the way until the series’ 21st episode. Sure, their relationship was tempestuous, but what did you expect? They were hormonal “adolescents” in lust. However, the intensity of their romance wasn’t the only reason that Brenda was The One for Dylan. She also put the “friend” in “girlfriend,” supporting him as he dealt with one issue (drinking) after another (jailbird dad). If that isn’t true love, we don’t know what is. 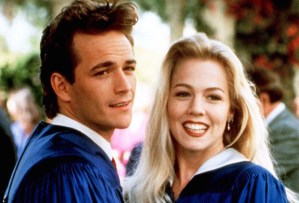 THE CASE FOR KELLY | There are those who will always say that Kelly’s relationship with Dylan was tainted by the fact that they connected behind Brenda’s back while she was in Paris. To them, we’d reply, “While she was flirting with Dean Cain!” Then we’d add that Kelly had been crushing on lifelong pal Dylan since way before the Walshes arrived in their zip code. What’s more, Kelly and Dylan didn’t just love one another, their similar backgrounds allowed them to get one another. So when he told her that they were soulmates, he wasn’t merely waxing poetic, he was telling it like it was.

So, who did you think was Dylan’s Ms. Right? Vote in the poll below, then debate away in the comments.