If you’re one of the devoted (but busy!) fans of HBO’s fantasy series, there’s a good chance you’re not up to speed on the goings-on in Westeros. Or Meereen. Or the Iron Islands. Or Dorne. Man, they really spread the action all over in Season 6, didn’t they?

Because you have eyes and have ostensibly visited the Internet at some point in the last year, you probably are aware that Jon Snow survived his Season 5 beat-down. But how? And what happened next? Did Daenerys ever make it home? Did Jaime and Brienne ever cross paths? Is Arya still begging, blind, in Braavos? And, for the love of R’hllor, did the sadistic Ramsay Bolton ever get his comeuppance?

Below is an ultraquick recap of each episode this season. If you’re super busy, use it as your backgrounder for the start of Season 7, which takes place Sunday at 9/8c. And if you watched Season 6 but just can’t remember who died at whose hand, or what blew up when, use this guide to jog your memory. If you want more detail, we’ve got you covered: Each entry contains links to the full episode recap, as well as any extras related to that installment.

What are you waiting for? Quit dragon and get to reading!

EPISODE 1, “THE RED WOMAN” | Jon Snow is really dead. And Melisandre, once she removes her necklace, is really, really old. (But no one knows this.) Brienne and Pod swoop in to save an on-the-run Sansa and Theon from Ramsay’s men, and Sansa officially accepts Brienne’s offer of protection. In Dorne, Ellaria kills Prince Doran; in King’s Landing, one of her daughters does the same to his son, Trystane. While Daenerys’ people look for her, she is swept up by a khalasar and placed in a temple to live out her life with other widowed khaleesi. Arya is a blind beggar on the streets of Braavos. Full recap here. 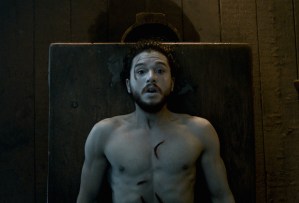 EPISODE 2, “HOME” | Jon Snow is really alive (again!), thanks to Melisandre’s spell, done at Davos’ insistence. Under the Three-Eyed Raven’s tutelage, Bran witnesses a scene from Winterfell’s past and learns that Hodor’s real name is Wylis. Tyrion frees Danerys’ dragons. Ramsay kills his father, Walda and their newborn son to ensure that Ramsay is the only Bolton heir. Euron Greyjoy appears in the Iron Islands and kills Balon, creating a power vacuum in the family. Full recap here, Kit Harington’s “Sorry!” here, and Michael McElhatton’s post mortem on Roose’s untimely exit here.

EPISODE 3, “OATHBREAKER” | In a vision, Bran witnesses a key moment from the past: His father Ned’s arrival at the tower where a pregnant Lyanna Stark was being kept by Rhaegar Targaryen, who’d stolen her away from Robert Baratheon. But before he can finish the memory, the Three-Eyed Raven yanks him out of it. Arya gets her sight back at the House of Black and White. Jon oversees the deaths of those who killed him, then announces that his Night’s Watch time is over. The High Sparrow announces that Cersei must stand trial for her moral crimes. In a stroke of luck (good for him, bad for them), Ramsay comes into the possession of Osha the wildling and Rickon Stark. Full recap here. 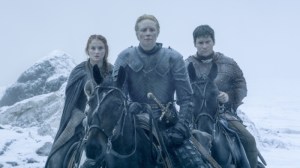 EPISODE 4, “BOOK OF THE STRANGER” | Jon’s exit from The Wall is interrupted by Sansa’s arrival; the two Stark kids agree to forge forward together. Jon gets word that Ramsay has Rickon. Daenerys burns to death the dothraki men who are keeping her captive, then saunters out, naked, as Daario and Jorah arrive. The High Sparrow has Margaery and Loras Tyrell in his prison. Ramsay kills Osha by slitting her throat. Full recap here.

EPISODE 5, “THE DOOR” | Bran’s vision in this episode includes watching the first white walker get made by one of the Three-Eyed Raven’s “children.” And when Bran inadvertently gets found by the Night King during another vision, the undead come for him. But he’s in another vision, back at Winterfell when Hodor was Wylis. And while Hodor dies in real time while holding the door against a horde of white walkers, Bran watches as Wylis starts screaming, “Hold the door! Hold… door! Hodor!” Summer, Bran’s direwolf, doesn’t make it out of the episode, either. Euron pushes Yara out of the way to rule the Iron Islands, but while he’s sealing the deal, she and Theon steal the Greyjoy ships and take off. Daenerys learns of Jorah’s greyscale and sadly demands that he figure out a cure so he can be by her side when she takes the seven kingdoms. A Red Priestess in Meereen tells Varys that Daenerys is the prophecied prince(ss) that was promised. Full recap here, post mortem with Kristian Nairn here, and watch the showrunners’ apology here. 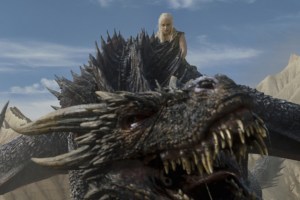 EPISODE 6, “BLOOD OF MY BLOOD” | Meera gets Bran away from danger, but they’re thisclose to becoming white walker chow when Uncle Benjen, long believed dead, shows up to save them. He’s not dead, but not fully alive, and he delivers the news that Bran ultimately will be the Three-Eyed Raven. Sam brings Gilly and the baby home, but his father’s derision for both Sam and his beloved cause the young man to steal the family sword and take off with Gilly and the boy. When Arya can’t kill someone J’qen told her to, he sends The Waif after her. Margaery brings Tommen into the faith, effectively handing rule of King’s Landing to the High Sparrow. Jaime is stripped of his Kingsguard post and banished from the city. Read full recap.

EPISODE 7, “THE BROKEN MAN” | The peaceful commune where The Hound (who survived Arya’s leaving him for dead) lives is gutted by murderers and thieves. Margaery slips her grandmother a note indicating she’s less brainwashed-by-the-High-Sparrow than she appears. Worried that House Stark doesn’t have the pull it once did, Sansa sends a surreptitious note for help. Jaime and Bronn arrive at Riverrun, which is under siege from the Freys. The Waif attacks Arya just after little Lady Stark books passage on a boat back to Westeros. Read full recap. 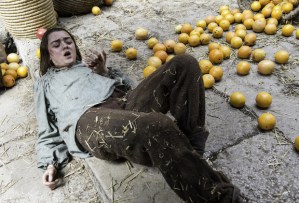 EPISODE 8, “NO ONE” | Arya kills The Waif, then tells J’qen that “A girl is Arya Stark of Winterfell, and I am going home.” The Hound kills the men who killed his fellow commune folk, then runs into the Brotherhood Without Banners; Beric Dondarrion tries to recruit him. Tommen does away with trial by combat, which is a blow to Cersei. Brienne runs into Jaime at Riverrun, where she’s come to recruit the Tullys to Jon’s cause. Edmure Tully surrenders the house to the Frey/Lannister armies; Brynden “Blackfish” Tully dies in the fight. Daenerys returns to Meereen, via dragon, to find the masters attacking the city. Read full recap.

EPISODE 9, “BATTLE OF THE BASTARDS” | Daenerys, with help from her dothraki army and her dragons, make short work of the masters’ forces. Then she agrees to support Yara’s bid for the Iron Islands in exchange for using the Greyjoy ships for her own purposes. Ramsay challenges Jon to a battle, then kills Rickon at the start of the fighting. Jon somehow escapes several passes at certain death, then Littlefinger arrives with replacement troops that help turn the tide. Jon and his men retake Winterfell, then Jon beats Ramsay nearly to death. But the final blow comes from Sansa, who lets one of her husband’s savage dogs into the cell where he’s being kept. It tears his face off and kills him. Full recap here and episode commentary here. 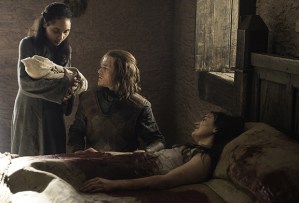 EPISODE 10, “THE WINDS OF WINTER” | On the morning of her trial at the Sept of Baelor, Cersei refuses to attend. That’s because she — with Maester Qyburn’s help — has rigged the place with enough wildfire to obliterate it completely. Margaery, her father, Loras Tyrell, the High Sparrow, Lancel and a whole bunch of other people die. When Tommen realizes what happened, he jumps out his window and kills himself. Arya kills Walder Frey and his two sons as payback for his role in the Red Wedding. Sam, Gilly and Little Sam arrive at the Citadel. Davos, furious after learning Melisandre was behind Shireen’s death, threatens to kill the Red Priestess if he ever sees her again. After a shaky start, the northern families deem Jon “King in the North” and pledge to help him fight the impending white walker threat. Daenerys breaks up with Daario and officially makes Tyrion the Hand of the Queen. Bran returns to his vision of the tower and witnesses Lyanna Stark dying just after giving birth to Jon, whom she hands to Ned and makes him promise to raise as his own. (This confirms a long-held fan theory that Jon is really a Targaryen.) Jaime returns to King’s Landing and is horrified to see what’s happened — including Cersei ascending to the throne — in his absence. Daenerys, her dragons and the Ironborn Navy set sail for Westeros. A white raven from the Citadel arrives at Winterfell: “Winter is here,” Sansa says as it begins to snow. Read full recap here, Natalie Dormer’s thoughts here, stirring monologues here, the director’s take here and an explainer on Jon’s parentage here.