Need to catch up? Check out last week’s Game of Thrones recap for Season 6, Episode 7 “The Broken Man,” here.

ABC’s Nashville came back from the dead this week. How is this relevant to the comings and goings of Game of Thrones‘ Westeros, you ask? Well, two weeks ago I would’ve said that Lady Stoneheart opening a hot dog-and-vengeance stand somewhere in the Riverlands was more likely than the country-music drama — beloved though it may be — getting another chance.

But these are magical times we live in, and if someone is pulling fan wishes out of the ether and making them come true, can I log my desire for Jaime and Brienne to quit this crazy scene and gallop off, swing by Bear Island to adopt little Lyanna Mormont, and then start a bed-and-breakfast in Pentos?

Yes, I know he’s a sister-schtupper who pushed a boy out a window as easily as you or I would order a coffee on a Tuesday morning. Yes, they will likely be the agents of each other’s death before this whole shebang is done. But after watching the characters reunite on screen in this week’s episode, can you really say there’s not even a tiny part of you that isn’t dying to book a weekend at J&B’s Seaside Inn and Crullery?

In other news, we get an update on poor pincushion Arya and The Hound runs into some familiar faces. (Maybe that hot dog stand isn’t so far off, after all, eh?)

Read on for the highlights of “No One.”

HOUSE STARK | We open on the Fake Cersei acting out Joffrey’s death with her troupe, giving a stirring performance of a grieving mother (took Arya’s advice, did ya?) while the crowd watches, silently rapt. At the end, they erupt with loud applause; Lady Crane walks backstage, takes off the blonde wig and, hearing a noise, finds Arya bleeding out in her closet.

She patches the girl up, calmly informing Arya that she seriously messed up the face of the actress who’d wanted her dead. Then she asks Arya to join the company on its way to Pentos. “Come with us. What’s left for you here?” Lady Stark replies that she’d bring danger upon them, thanks to The Waif, and that her plans instead center on finding out what lies “west of Westeros,” aka where the maps stop. But for now, she’s in considerable pain, and the actress very maternally suggests she take some milk of the poppy and rest.

While Arya is out, a man appears in Lady Crane’s room. The girl wakes in terror to find the actress dead at The Waif’s hand. The Many-Faced God has been “promised another name,” The Waif says, causing Arya to leap from the window in terror. There’s a big chase through the streets; it ends with Arya falling down a bunch of stairs and knocking over a lot of fruit. She’s bleeding again, and very weak.

“On your knees, or on your feet?” The Waif asks, as Arya grabs Needle. And the next thing you know, J’qen finds The Waif’s bloody face on his wall. “You told her to kill me,” Arya says from behind him. “Yes, but here you are. And there she is,” he answers. “Finally, a girl is no one.” Um, nope. “A girl is Arya Stark of Winterfell, and I am going home,” she states, finally marching outta that freak show for good. YES. YES. YES. YES. This may even require a YAAAAAAAS.

HOUSE CLEGANE | Sandor Clegane takes an axe and makes short, bloody work of the men who made short, bloody work of the peaceful sept where he’d been living. And when he tracks down the last three of the group, he finds them about to hang from a tree… courtesy of the Brotherhood Without Banners. Turns out they were rogue BWB members who now have to die for being so terrible. The Hound is given two of the tree to dispose of himself, which he does — then steals one of their boots and inquires about lunch.

As they eat, Thoros tries to recruit The Hound to their cause. “We need good men to help us,” Beric Dondarrion says. “It’s not too late for you.” The scarred man looks dubious but (maybe?) hopeful. Speaking of hopeful, the brotherhood is intimately involved with the appearance of Lady Stoneheart in the books, so I’m crossing my fingers and staying cautiously optimistic. (And if you don’t know what I’m talking about and don’t want to be spoiled, don’t Google, cool?) 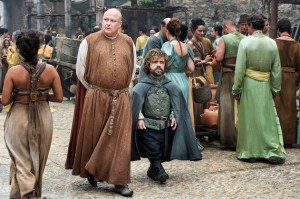 HOUSE TARGARYEN | Tyrion and Lord Varys walk Meereen as the latter prepares for a secret expedition to Westeros. Things seem to be going well, post-Tyrion’s accord with those in power, but Varys is wary as he slips away to the ship.

So, bored, Tyrion gets Grey Worm and Missandei to drink with him. She says she once drank, and “it made me feel funny.” He replies, “That’s how you know it’s working.” Ha. As the three twiddle their thumbs, waiting for Daenerys to return, Tyrion muses that he would like to have a vineyard when all this nuttiness is over (for what it’s worth, I would love to get silly on Imp’s Delight). Then he tries to get the Mother of Dragons’ advisers to tell jokes. It’s just starting to go well (thanks to a tipsy translator), when bells start ringing: “The masters have come for their property,” Missandei says, now stone-cold sober.

Grey Worm advises waiting for the masters, who are firing on the city, to come to them. Moments later, it appears that has happened. But don’t worry, guys: It’s just Daenerys! She’s back!

HOUSE LANNISTER: ROYALLY SCREWED EDITION | Several members of the Faith Millitant are inside the Red Keep, thanks to Tommen, and they want to meet with Cersei. So she (and The Mountain, and skeevy faux maester) met with Lancel, who relays the High Sparrow’s desire to meet with her on his turf. “Order your man to step aside, or there will be violence,” Lancel informs her. “I choose violence,” she whispers. Then The Mountain tears one of the sparrow’s head from his body — with his reanimated, bare hands — and Cersei gets in one last zinger: “Please tell his High Holiness he’s welcome to visit.”

The Queen Regent’s moment of power is short-lived, though; during a royal announcement (that she didn’t even know about until it happened), she is relegated to the gallery rather than her usual seat by Tommen’s side. The big news: Loras and Cersei’s trial will be held in the great sept, oh — and trial by combat is now forbidden. This is a big deal, because Cersei had been banking on The Mountain to destroy his opponent, thus winning her freedom. Instead, Tommen announces, a handful of septons will determine her fate. As she’s absorbing this news, Qyburn approaches and says that the rumor she wanted him to investigate is “More. Much more.”

HOUSE LANNISTER: UNDER-SIEGE EDITION | Meanwhile, Brienne and Pod come across the siege outside Riverrun, where the sight of Jaime riding among the ranks commands her attention. “You think they’re f—king?” Bronn casually asks Pod as Jaime and Brienne talk in a tent, echoing a conversation I’ve had almost word-for-word with several fellow viewers over the years.

“I’m proud of you,” Jaime tells Brienne re: keeping her oath, and I think he means it. “We shouldn’t argue about politics,” he says. “I know there is honor in you,” she says. Bottom line: She wants to enter Riverrun under flag of truce and try to get The Blackfish to give up the castle in exchange for Jaime letting his forces ride safely north. “I need your word,” she presses, and he grants it. “You have until nightfall.” That worked out, she tries to return the sword of Valyrian steel he gave her. “It’s yours. It’ll always be yours,” he responds, and COME ON GUYS. YOU ARE KILLING ME HERE. She reminds him that if Brynden Tully doesn’t do as she asks, they may well end up fighting each other. “Let’s hope it doesn’t come to that.”

After a bit of posturing, The Blackfish admits that he doesn’t “have enough men to help her take Winterfell,” and that he’s going to stay and fight for his own home rather than march north to help Sansa. So Brienne instructs Pod to send a raven to the redhead: “Tell her I failed.” Sniff.

HOUSE TULLY | Jaime gives Edmure Tully something no one has done in at least three episodes: a chance to talk. Edmure warns the Kingslayer that his uncle will never surrender the castle. Then Jaime brings up Edmure’s son — conceived on his wedding night — and the wife he hasn’t seen since. Edmure is unswayed. “You’re a fine-looking fellow, your square jaw, your golden armor,” Tully says, and now I’m very intrigued to where this is going. “I want to know, I truly do: How do you live with yourself?” (Ah. I mean, that’s good, too, right?) Jaime waxes poetic about his time as Catelyn’s prisoner, her love for her children. “Don’t talk about Cat!” Edmure spits, but Jaime never rises to the bait as he compares Catelyn and Cersei… then says he’ll do whatever he has to do to return to her. “If I have to slaughter every Tully who ever lived to get back to her, that’s what I’ll do.” Edmure cries.

Later that night, Edmure approaches the castle and demands entry — but The Blackfish won’t allow it, saying it’s a trap. “You are not lord of this castle, my lord,” the man in charge of entrances and exits informs Brynden, and the drawbridge lowers. Once inside, Edmure commands that all the guards stand down and the home open its gates — and that his uncle be put in irons and handed over to the Freys.

Brienne tries to get the old man to escape with her and Pod, but he refuses to run again. “You’ll serve Sansa far better than I” he tells her, rushing back to meet the invading forces with his sword drawn. Later, Jaime is informed that The Blackfish died, fighting. At that same moment, Jaime notices Brienne and Pod rowing to freedom. She raises a hand to him, he gazes at her, and I don’t care who or what you ‘ship, that is a MOMENT.

Now it’s your turn. What did you think of the episode? Sound of in the comments!