Just in case you haven’t perused your on-screen channel guide lately, this season’s Game of Thrones episode descriptions are positively Matthew Weiner-esque in their simplicity/obfuscation.

For those not familiar with the Mad Men creator, whose demands for secrecy in all aspects of his AMC series became legend, prided himself on crafting episode previews and synopses that gave away absolutely nothing about the hour in question. For instance, an installment in which Don would go on a week-long bender might simply say, “Don has a drink.” You get the idea.

So this week’s Thrones synopsis — which includes the phrase “Arya makes a plan” — in no way prepares us for the brutal (and incredibly surprising) attack made on the youngest Lady Stark in the episode’s final moments. Is she dead? Probably not (the recapper wrote hopefully), but plenty of others aren’t so lucky during the hour.

Read on for the highlights of “The Broken Man.”

HOUSE CLEGANE | We open on a community where a bunch of people are building a large structure, and the vibe is very Amish-via-Woodstock: happy faces, communal tables, that kind of thing. Teams of men carry timber in for the job,and when one turns his face… it’s The Hound!

Turns out, the man who seems to be in charge of everyone, a smiling dude played by Ian McShane, was the one who found the former knight and rescued him from almost certain death. In a very pragmatic, non-spiritual way, the man tells the Hound that “there’s something greater than us, and whatever it is, it’s got plans for Sandor Clegane.” But The Hound isn’t biting. “If the gods are real, why haven’t they punished me?” he wonders. “They have,” the man says, walking away.

Later on, the man stands in the center of the group, with everyone listening, rapt, as he speaks of his past sins: murder, theft, all manner of terrible things. Still, he maintains, “it’s never too late to come back” from what you were — and he looks directly at The Hound when he says it.

Just then, a trio of men on horseback ride up and intimate that they could take whatever they like from the peaceful encampment. Though they ride off, they’re still a threat — and Sandor wonders how the man, who calls himself a septon, is prepared to defend his group. Easy, McShepton says: He won’t. Peace and love, man!

And so when The Hound comes down the next morning from chopping wood, he finds the entire group — including McShepton — murdered. So he grabs a nearby ax and sets off. It’s OK, Hound, honey. Chill wasn’t a good look on you, anyway.

HOUSE TYRELL | The High Sparrow walks in on Margaery reading The Book of the Mother, which she can now quote from memory. She reiterates her confession from last episode, that she used to pity the poor but never truly loved them. He’s all, “Yeah, that’s great, but can we talk about how you and Tommen haven’t hit the sheets lately?” She says the desires that once drove her “no longer do,” and she’s met with the super liberated stance that women don’t need desire, just “patience,” which makes me wonder how much mercy The Mother would have for the High Sparrow if I put the two of them in a room. 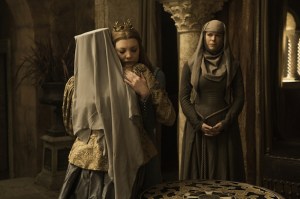 He also mentions that Margaery’s grandmother is an “unrepentant sinner,” and he subtly threatens her, so the next time we see Marg, she and Septa Unella are visiting the old woman. “What have they done to you?” Lady Olenna asks, suggesting that Margaery leave for Highgarden ASAP. Instead, the Queen kneels — surreptitiously slipping her grandma a note — and looks at her strongly as she insists that Olenna return home at once. In the hallway outside, Grandma Tyrell unfolds the piece of paper to see a crudely drawn rose. Chalk up one for Team LongCon!.

Cersei later questions why Lady Olenna would leave King’s Landing while Loras is still imprisoned. She also points out that they need to work together to overthrow the faith forces in control of the town. “I wonder if you’re the worst person I’ve ever met. At a certain age, it’s hard to recall. But the truly vile do stand out over the years,” the older woman shoots back. So that’s a no? “You’ve lost, Cersei. It’s the only joy I can find in all this misery,” Grandma adds.

HOUSE STARK-AND-SNOW | Jon and Sansa meet with the free folk, with Snow pointing out that even if the wildlings don’t come to Winterfell to fight with them, the Boltons, Karstarks, etc. will eventually march north and hunt them all down. When that doesn’t rouse the troops, Tormund points out that Jon ACTUALLY died for standing up for the people north of the wall, and when the giant stands and says, “Snow,” that seems to seal the deal for the rest of them.

Later, the Stark siblings visit Lyanna Mormont, the surprisingly hard-assed child who’s the head of her family at Bear Island. They ask for her allegiance, and it is truly awesome to watch this tough-talking… what is, she, 10-year-old? — consulting with her advisers and coming up with the very defensible position: “Why should I sacrifice one more Mormont life for someone else’s war?” But then Davos steps in and sympathizes with her — as someone in a position they never thought they’d have —  and points out that the war that’s coming is her war as much as it is Jon and Sansa’s. The battle “is between the living and the dead. And make no mistake, my lady: The dead are coming,” the Onion Knight says. “A divided North won’t stand a chance against the Night’s King.” She ultimately decides to back House Stark, to the tune of… 62 fighting men. “We are not a large house, but we are a proud one,” she says. “If they’re half as ferocious as their lady, the Boltons are doomed,” Davos says, with affection and admiration in his eyes. (Side note: Oh, it’s gonna hurt when he realizes how little Shireen dies, right?)

But House Glover is not as enamored of being a part of Jon’s army, especially because the bulk of his forces are made up of wildlings. Sansa coldly reminds Lord Glover that his family is pledged to support the Starks. “And where was King Robb when the Ironborn attacked this castle?” he spits. “Taken up with a foreign whore, getting himself and those who followed him killed… I served House Stark once, but House Stark is dead.” Ouch.

Even though things look bleak, Davos later maintains that they still have a chance ,”if we’re careful and smart.” But Sansa disagrees, saying they need more men to retake Winterfell. So she pens a note — to whom?! — and looks very pensive as she prepares to attach it to a raven.

HOUSE LANNISTER | Jaime, flanked by Bronn (!) and the rest of his men, approach Riverrun. During a break in the approach, the “upjumped sellsword” laments that he still hasn’t seen the land, bride, etc. Jaime promised him back in the day. “A Lannister always—” the Kingslayer starts, but Bronn doesn’t wanna hear it. “Don’t say it. Don’t f—king say it,” he sniffs. (Heh.)

The forces set up shop outside the castle, just as House Frey’s men are threatening to kill Edmure if Brynden “Blackfish” Tully doesn’t yield. “Go on then, cut his throat,” the older man says, calling their bluff. (They don’t.) Jaime arrives, regulates, and orders that Edmure be bathed and fed. “The siege is now under my command,” he decrees, with Bronn carrying out ol’ Golden Glove’s orders.

Later, Jaime and the Blackfish meet face to face. “If you surrender, I’ll spare the lives of your men, on my honor,” Jaime says. Still, Catelyn’s uncle is not moved. “As long as I’m standing, the war is not over,” he replies, adding that they have enough provisions to last two years inside the castle walls.

HOUSE GREYJOY | Theon looks mightily uncomfortable in a brothel, and that’s before his sister starts macking on a half-naked honey across the table from him. “It’s a great, big world and we have fast ships. Drink,” she urges him, trying to get him to remember who he is despite his “bad years” — which might be the understatement of the season. In a very Ironborn way, she tells him to either slit his wrists and be done with it or sail with her to Meereen to make a pact with “this dragon queen.” He rallies, they have nice moment, then Yara leaves him to “go f—k the t-ts off this one,” pointing to her waiting concubine. Aww, guys!

HOUSE STARK: BETTER BLED THAN DEAD EDITION | Just after Arya books passage on a ship back to Westeros, leaving in the morning, The Waif pulls a sneak attack — using the face of an old woman — and stabs Sansa’s sis multiple times in the belly. We’re talking twisting of the blade and all. Arya gets away by jumping into the water, but oof — those wounds are no joke.