All there is to say is: HODOR!

Read on as we recap the highlights of “The Door.”

HOUSE STARK: QUANTUM LEAP EDITION | In a flashback, Bran sees the first white walker made by one of the “children” who hang out with the Three-Eyed Raven. Later, while the Raven is sleeping, Bran goes on an unaccompanied mind trip, winding up standing before a massive army of white walkers. He snakes through the undead crowd unbothered, but when he stands before the Night’s King — you remember him from the Battle of Hardhome — the head baddie both sees and touches him.

When Bran comes to, screaming, the Raven says that he’s in danger: Because the Night’s King’s mark is on the boy, he’ll come for him. “The time has come… for you to become me,” the old man says. And as he predicted, it’s only a matter of time before the entire convocation of the damned sets up shop right outside the cave. “Get Bran and run!” one of the “children” says to Meera. But Bran and the Raven are both in the past, back in the Winterfell scene we saw a few episodes back.

The children hurl fireballs at the Night’s King’s army, to little effect. Eventually, the white walkers breach the cave, leaving Meera and the children to fight them off as she tries to wake young Stark. Eventually, her cries reach him in the past: “Warg into Hodor now!” And with the Raven’s encouragement, the boy does so… but not in time to save poor Summer. (SNIFF.) 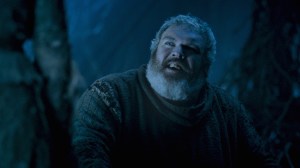 As the Night’s King kills the Raven in the present, Bran watches his mentor disappear in the past. Meanwhile, a warged Hodor carries off Bran and Meera follows. But just as they get outside, a horde of white walkers keeps hitting the door Hodor’s holding — the only thing stopping them from getting to Bran — and as Hodor of the Past screams, “Hold the door! Hold the door! Ho…dor!” (a-ha!) while Bran watches… Hodor of the present becomes White Walker dinner. Yeah, I can’t exactly wrap my mind around it, either.

HOUSE STARK | Sansa receives a raven summoning her to a meeting with Littlefinger, but because she’s no longer anyone’s fool, she brings Brienne with her. Baelish is all, “I’m here with the knights of the Vale to help!” She is having none of it. “Did you know about Ramsay? If you didn’t know, you’re an idiot. If you did know, you’re my enemy,” she says, forcing him to guess at what terrible things Ramsay might’ve done to her. “I can still feel what he did in my body, standing here right now,” she says. I absolutely adore this new, hardass Sansa, by the way. She threatens to turn Brienne loose on him, but Littlefinger is ever the sweet-talker. He tells her that her uncle Brendan, the Blackfish, has gathered forces and retaken Catelyn’s family home Riverrun and suggests that she go to her mother’s people rather than stay with her “half brother.” She lets him leave without killing him. Can’t say I would’ve done the same.

Later, Jon, Sansa, Brienne, Edd, Tormund, Melisandre and Davos have a strategy session. Sansa’s big point: The North is loyal, and they’ll rally behind a combined Jon-Sansa team. But when she drops the intel about the Tullys and Riverrun, she lies about how she found out. (Also, Brienne’s observations about Jon and Tormund? Spot-on.)

HOUSE A GIRL HAS NO NAME | Arya and The Waif spar, which turns to fisticuffs, which ends with Arya bleeding on the ground. “You’ll never be one of us, Lady Stark,” the girl says to Arya. “She has a point,” J’qen says. A stroll through the Hall of Faces reveals that the visages on the walls are of the first Faceless Men, then Hagar gives his charge a vial of poison and tasks her with killing an actress. That actress happens to be playing Cersei in a farce about the Baratheon family. Arya laughs hard at the Baratheon folly, yet is less pleased to see her own father — and his beheading — mocked in the same play.

Backstage after the performance, after we’re treated to an up-close shot of the Joffrey actor’s warty junk, Arya figures out that she’ll slip the poison into the actress’ rum. (Her name, by the way, is Lady Crane.) But when Arya is curious about who’s hired the hit, J’qen informs her: “A servant does not ask questions.”

HOUSE GREYJOY | At the kingsmoot, Yara makes her play for leading the Iron Islands, but she’s shouted down by those who say that Theon — aka Balon’s male heir — should take the position of power. “She is your rightful ruler,” he says, rallying the group behind his sister. “We will find no better leader. This is our queen!” and for a minute, everyone’s on board. But then their uncle Euron Greyjoy steps forward and claims the role… and Yara totally knows he’s the reason their dad is dead. (To his credit, Euron admits to the murder, albeit with all the passion of someone ordering a turkey sandwich at the corner deli.) Once the men start chanting “Euron! Euron!” it’s basically over. So while Uncle Greyjoy is getting baptized/nearly drowned as the new ruler… Yara, Theon and those loyal to them run to the ships and take off! When Euron is done spitting up saltwater, he moves to murder his niece and nephew… and upon realizing they’ve gone, he commissions “a thousand ships.” 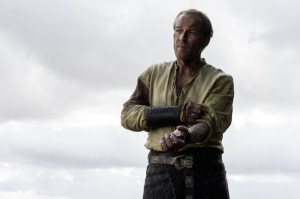 HOUSE TARGARYEN | Ser Jorah reveals his infected arm to Daenerys, who starts crying and apologizing. “All I’ve ever wanted is to serve you,” he says. “Tyrion Lannister was right. I’ll love you. I’ll always love you. Goodbye, khaleesi.” But she gets all regal on his dragonscale behind and commands him to find the cure for his affliction. “I command you to heal yourself and then return to me,” she says. “When I take the seven kingdoms, I need you by my side.”

Back in Meereen, things are far more peaceful since Tyrion struck the deal with the masters. But they need some help in the public relations department, so Tyrion and Varys meet with Kinvara, a red priestess. But unlike Melisandre, Kinvara thinks Daenerys is the one who was promised. “You want your queen to be worshipped and obeyed. And while she’s gone, you want her advisers to be worshipped and obeyed,” the holy lady surmises. But Varys is very wary. “Why should I trust you any more than the priestess who counsels Stannis?” he questions her. So she schools him by bringing up intimate details from the night he was castrated, and he is FREAKED. “We serve the same queen. If you are her true friend, you have nothing to fear from me,” she assures him. Red Priestess mic drop!