As a resident of New York City, I often stand on subway platforms and marvel at the resiliency of rats and roaches. (Well, maybe “try to avoid at all costs” rather than “marvel,” but you get the point: I stare from afar.)

I thought similar things upon seeing Peter “Littlefinger” Baelish show up in Westeros for the first time this season in Sunday’s episode. Not only does that slippery man survive circumstances that have ended so many others, he thrives. And this week’s episode is full of other characters that should — under normal circumstances — have been dead and gone long ago, but they follow the Matthew McConaughey school of life and Just. Keep. Livin’.

Read on for the highlights of “Book of the Stranger.”

THE MEN OF THE WALL | Dolorous Edd is with Jon as he prepares to leave. He’s going south, he says. “What are you going to do?” Edd asks. “Get warm,” Jon jokes weakly. They’re just about to argue when the horn sounds: Someone’s at the gate.

And glory be to the old gods and the new, Sansa rides into Castle Black, flanked by Brienne and Pod. Lady Stark sees her half brother from across the courtyard, and there’s a moment where they just stare at each other, but then they leap into each other’s arms. No, YOUR direwolf is crying!

“We never should’ve left Winterfell,” he says later as they sit by the fire. She agrees, then apologizes for being “awful” when they were younger. They’re laughing and smiling and goodness, this is the most levity we’ve had all season so far. “Where will you go?” she asks. “Where will we go?” he responds. Guys! She asserts that they have to go back to Winterfell and fight the Boltons for it. “I’ve fought, and I lost,” he says, sounding tired. “I want you to help me, but I’ll do it myself if I have to,” Sansa counters, and I have never been so proud of her.

In the courtyard, Melisandre tells Davos that she serves Jon now. What about Stannis, he asks? Oh right, about that… She starts to mention the great battle, but as Davos asks worriedly about Shireen, Brienne pops up and reintroduces herself to Seaworth as the knight who executed his boss. Meanwhile, Melisandre slinks away.

Later, Torumund is ogling Brienne across the table at a meal (I loved that little moment) when Jon gets a lette from Ramsay: “Your brother, Rickon, is in my dungeon… I want my bride back.” Guess who it’s from? “Northern families will fight for you,” Sansa reminds Jon, who is — as she notes — the son of the last true Warden of the North. Looks like we’re heading for Winterfell, kids!

HOUSE BAELISH | Petyr Baelish shows up during one of his “nephew” Robin’s archery lessons, gives the boy a falcon and accuses Lord Royce of setting the Boltons upon him and Sansa during their journey. Robin wants to toss Royce through the moon door — though I’d wager that Robin wants to toss everyone and everything through the moon door — but Littlefinger steps in at the last moment and buys Royce’s loyalty by steering the simple teen away from that outcome. That taken care of, Littlefinger says to gather the men of the Vale, because it’s time to jump into the fray. 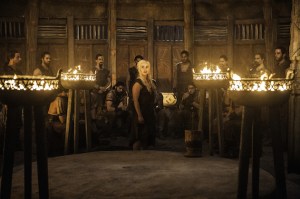 HOUSE TARGARYEN | Tyrion meets with the masters of Slaver’s Bay to try to achieve peace via diplomatic means rather than military ones; Missandei and Grey Worm think this is a hell of a bad idea. “You don’t need slaves to make money,” Tyrion points out, adding that King’s Landing hasn’t had slavery in years, “and I grew up richer than all of you.” He has a point.

His deal: The masters will end slavery in seven years’ time, they will be compensated for their losses, and they will cut off support for the Sons of the Harpy. Then he offers them some whores to seal the agreement, because Tyrion. But the meeting with the masters angers the freed slaves; thanks to some apt words from Misandei and Grey Worm, the situation cools a bit. Still, Daenerys’ advisers are far from being on the same page. Tyrion is all, “It’s cool! We’ll use their contempt for us to our advantage!” But Grey Worm points out that the masters will come out on top by using them: “That is what they do.”

So Daenerys goes to the meeting where the Dothraki men are to decide her fate. She talks some smack and then burns them alive inside the Dosh Khaleen house. And just like she did in Season 1, khaleesi walks out of that inferno like she’s stepping out of a massage room at a very liberal day spa: naked and looking completely relaxed. As the Dothraki in the city bow before her, Daario and Jorah approach… and then do the same thing. Girl knows how to PUT ON  A SHOW.

HOUSE MORMONT | Daario and Jorah bicker as they search for Daenerys, eventually creeping up on a hill where they can spy on the city containing the dosh khaleen. So the pair leave all their weapons on the hillside — it’s forbidden to bring them into the sacred town — and in doing so, Daario sees Jorah’s greyscale-infected wrist. “You know what happens?” the younger man asks. “I know what happens,” Mormont says.

That night, the two men sneak into the Dothraki community, searching for their missing queen. But they soon run afoul of a couple of locals; the only reason Jorah survives is because Daario smuggled a knife in, and he uses it to kill Mormont’s attacker. Meanwhile, Daenerys bonds with one her young fellow captives on an evening stroll when they run into Jorah and Daario, who want to make a run for it. Though initially hesitant, the mother of dragons looks to the younger khaleesi and asks her to trust her.

HOUSE TYRELL | Margaery, still held in the High Sparrow’s cell, is hauled before the man himself. He gives her a brief overview of his life as the materialistic son of a cobbler who had a come-to-the-seven-gods moment after a particularly debaucherous night during his youth. “The people I was trying to climb away from, the beggars in the street, the poor, they were closer to the truth than I was,” he reminisces.

The holy man surprises her by taking her to see Loras, who’s doing a really good impression of a burlap sack on the floor of his cell. He cries when he sees her, but she encourages him to buck up. “If either of us give in to what they want, then they win,” she says, sounding like the queen I remember.

HOUSE LANNISTER | After Cersei throws Maester Pycelle out of Tommen’s quarters, the boy king warns his mother not to antagonize the High Sparrow, because he’s dangerous. She’s like, “Um, does ‘Walk of Atonement’ ring a bell?” Poor Tommen, who’s just trying to do the right thing, says he has something to confess about what the High Sparrow told him during their meeting.

Cut to the Lannister twins storming into a meeting with Kevan Lannister and Margaery’s grandmother: The High Sparrow is planning to have Margaery walk her own shame parade in a few days, and everyone in the room agrees that is a BAD idea. So, a plan: The Tyrell armies will be there to help prevent it, and hopefully the many that will die won’t include the people everyone in the room cares about.

HOUSE GREYJOY | Theon enters his family’s home to find Yara sitting before the fire — but her anger at her brother burns even hotter. Men died trying to rescue him, she points out, and he betrayed her. Though Theon cries and looks utterly wrecked, she assumes he’s there to slip into a place of power now that their father is dead. “Tell me what you want!” she demands, grabbing him. “You should rule the Iron Islands,” he answers quietly, tears streaking his face. “Let me help you.”

HOUSE BOLTON | Either Osha isn’t afraid of Ramsay when she’s brought before him, or she talks a really good game. Now that he has Rickon, “what use have I for you?” he asks. She plays pretty much her only remaining card and straddles him, trying to distract him while she reaches for his knife, but he whispers that Theon told him the Stark boys were dead… then he sticks a knife into her throat and she falls to the floor, dead. Ugh.