Need to catch up? Check out last week’s recap here.

Damn, Braniel: Back at it again with satisfying the fans!

After last week’s sweet look back at Winterfell life (Benjen! Hodor Wyllis!), I eagerly awaited Bran’s next dip into the pensieve with the Three-Eyed Raven on Game of Thrones. And yes, I’d heard fans buzzing about the much-anticipated Tower of Joy scene, but the HBO drama wouldn’t go there so soon after its drop-the-mic-wake-the-Lord-Commander moment at the end of last episode… would it?

IT WOULD. This week’s hour finds Bran peering into the past to witness a moment that is legend among Thrones readers: Ned’s storming of the Tower of Joy, where Rhaegar Targaryen stashed Lyanna Stark and left her to perish after stealing her away from her betrothed, Robert Baratheon. After Ned and his men laid siege to the tower, a dying Lyanna made Ned promise her something… but what?

Everyone and their mother of dragons thinks the promise involves Lyanna’s infant, who is widely believed to be Jon Snow (making the “Ned’s bastard” thing just a cover). Innnnteresting, no? Read on for the major events of “Oathbreaker.”

HOUSE STARK-THAT-WAS | The scene in question takes place in the first half of the episode, with Bran quickly recognizing one of the men approaching the tower as his father. Another man with him, Howland Reed, is Meera’s father.

In a conversation between Ned and the men guarding the tower, it’s clear that at this point in time, Rhaegar is dead. A fight begins, with many of Ned’s men going down quickly. But soon, it’s Ned and one of the guards left; the only way Ned doesn’t die is that another one of Ned’s men stabs the attacker in the back, and then Ned finishes him off.

A woman’s cry comes from the tower, so Ned runs for the stairs. But Bran yells, “Father!” and it seems like the elder Stark hears him… and that’s when the raven decides that it’s time to go. Back in the tree, Bran is mad that he wasn’t able to see what came next. But the old man tells him they’ve got a lot more to do, and that includes teaching his young charge “everything.”

HOUSE STARK-THAT-IS | Arya takes a lot of hits playing the lying game with The Waif. During the pain game, Arya admits that she didn’t want The Hound to die and was confused about how she felt about him when she left him to his death. As the girls fight, Arya soon is able to best The Waif — even though she’s still blind — and J’qen sees all.

He gives her a drink from the fountain at the House of Black and White; when she pauses before swallowing, he says, “If a girl is truly no one, she has nothing to fear.” And when she opens her eyes, she can see again.

THE MEN OF THE WALL: BACK-IN-BLACK EDITION | Our time at The Wall opens on Davos, looking like we all did last Sunday at 10:01 pm ET. Jon sits up, freaked out, and touches the stab wound in his chest. “What do you remember?” the knight asks as Melisandre enters the room. “They stabbed me. Olly put a knife in my heart,” he says, horror growing on his face as he realizes, “I shouldn’t be here.”

But the red priestess ignores all of that to question him about where he went while he was dead. The answer? “Nothing.” She starts spouting off about how he’s the prince that was promised, but Davos caps her crazy and sends her out of the room. “I did what I thought was right, and I got murdered for it,” Jon says, very upset. “I failed.” Davos proves he’s the best corner man in the biz when he replies, “Good. Now, go fail again.”

In the yard, Tormund makes a penis joke and clutches Jon close for a moment, which is about as close to touching as we’re gonna get from Big Red. Then Dolorous Edd rags on Jon for not being funny. Guys, he’s back!

Later, Jon has the men who betrayed him — including Olly and Alliser Thorne — set up to hang at Castle Black. Thorne is unrepentant. Olly looks like he’s sucking on a Lemonhead. And with the rest of the men watching, Jon draws his own sword (like Ned taught him) and cuts the rope that holds up the platform they’re standing on, killing all four.

Then, Jon hands his cloak to Edd and says, “You have Castle Black. My watch has ended.” AND WALKS OUT.

Meanwhile, a seasick Sam informs Gilly that the ship they’re on is taking her to his family’s home and not the Citadel, as she’d thought. “If you think it’s for the best, we trust you,” she says after thinking about it for a minute, and then she calls him the father of her son, and it’s really a beautiful moment until he pukes into a nearby bucket. 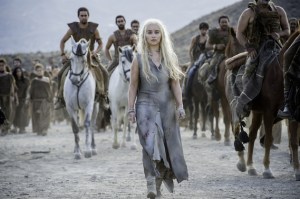 HOUSE TARGARYEN | Daenerys is walked to the dosh khaleen, where she’s stripped of her clothes, necklace and notion that she’s anything special. “We were all young once. But we all understand the way things are. You will learn as well, if you are fortunate enough to stay with us,” an older woman informs her. Oh, and the fact that Dany “went out into the world” rather than coming directly to the Home for Grieving Khaleesi means her fate is far from certain.

Meanwhile, back at home base, Varys has a meeting with Vala, the woman who helped the Sons of the Harpy murder the Unsullied and the Second Sons in that massacre last season. He dangles freedom — a ship to Pentos and a bag of money — for her and her young son if she’ll give him intel on the Sons of the Harpy. (Remember when he did something similar to Shae? Remember how well that turned out?)

He learns that the masters of Astapor and Yunkai are funding the Sons of the Harpy with some help from Volantis. So Tyrion asks him to send a message. “Men can be fickle,” Lord Varys replies, “but birds I always trust.”

HOUSE LANNISTER | Back in Kings Landing, crooked not-quite-a-maester Qyburn is building his own flock of child informants. But they fly away when Cersei, Jaime and the Mountain enter the room. The queen regent tells Qyburn she wants little birds everywhere — not just the city. “I want to know where they are,” she says. Now that’s the schemer I know and love!

The trio then crashes the small council meeting, which Margaery’s grandmother is also attending. The Lannister twins make a big deal out of staying at the gathering, but then everyone else gets up and leaves, and then they’re just sitting in a room with a the World’s Strongest Undead Man.

King Tommen visits the High Sparrow, demanding that Cersei be allowed to see Myrcella’s grave. But the holy man says that the walk of atonement was only the beginning; she needs to stand trial before she can be exonerated of any charges.

I give the boy king credit here, because he’s really trying to do something good, and he’s kind of flying blind. But the High Sparrow gets Tommen to lower his guard a bit by talking about how Cersei’s love is for her children and wait a minute, he’s totally playing the kid, isn’t he? “A true leader avails himself of the wisest counsel he can, and nobody’s wiser than the gods,” the sparrow says, and if that isn’t a job application, I don’t know what is.

HOUSE BOLTON | Ramsay gets petitioned by a lord with property close to The Wall. He points out that the wildlings are going farther and farther south, and they need to work together. After an uneasy accord is reached, the man offers a gift: Osha and Rickon, with the head of Shaggydog as proof that the boy is a Stark. (Side note: Good lord, that actor has become a man since last we saw him, right?) “Welcome home, Lord Stark,” Ramsay says with that awful smile of his.