Can’t quite recall what happened in the previous episode? Read our recap here.

Please just click “READ MORE,” because we’ve got a lot to talk about, and I don’t want to spoil passers-by.

HOUSE STARK: WHATCHOO TALKIN’ ‘BOUT, HODOR? EDITION | The Three-Eyed Raven and Bran are both warged out — or looking like it, at least — but when we flip to a new scene we realize they’re standing in the background of a Winterfell-set scene, where Ned and Benjen Stark as boys are sparring. Lyanna rides in like the mythical creature she’ll eventually become, and we get a glimpse of a non-addled Hodor as a boy (whose real name is Willis!) before the Raven announces, “It’s time to go.”

Bran comes to and wonders why the older man dragged him from the memory. The Raven implies that it’s not good to spend too much time in the past that way. Hodor is there, too; he carries Bran outside to see Meera, who’s ventured outside the cave. “The Three-Eyed Raven says there’s a war coming,” he warns her. “And we’re going to fight it in there?” she says dispassionately. After he leaves, one of the Raven’s creepy tree kids tells Meera that Bran will need her greatly in time to come.

HOUSE LANNISTER | Some drunken idiot in King’s Landing tells a ribald story about how Cersei enthusiastically responded to his lascivious overtures during her walk of shame. Later, when that man steps into the alley to pee, The Mountain simply and disgustingly pulverizes his skull.

The Mountain returns to Cersei’s side just in time to see Tommen’s army deny her passage to Myrcella’s funeral. Over at the sept, Jaime wonders why the king has been so distant with his mother. “Everything she endured, she did it for you,” he reminds the boy, who angrily says he can’t go see her… but it’s because he’s feeling crushing guilt over Cersei’s walk of atonement and Margaery’s imprisonment. “Go and see your mother, Tommen,” Jaime advises his son/nephew just after the High Sparrow arrives.

That gives the two men a little alone time to talk (Side note: During the chat, we learn those corpse-eye stones are supposed “to remind us not to fear death.” Neat!) Jaime threatens the holy man with violence and is surprised when he’s not intimidated — perhaps it’s because a ton of his armed followers have suddenly filed into the chamber? The High Sparrow leaves, and Jaime seems very unsettled by his decree that a large number of poor, powerless people working together “can overthrow an empire.”

Tommen does as the Kingslayer asks and visits Cersei, to whom he apologizes. She forgives him, but he doesn’t take the absolution. “You raised me to be strong. I wasn’t, but I want to be. Help me,” he pleads. “Always,” she whispers, hugging him to her. 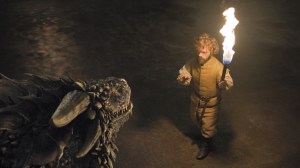 HOUSE LANNISTER: QUIT DRAGON YOUR HEELS EDITION | “If I lost my cock, I’d drink all the time.” That’s how Tyrion opens the meeting of Daenerys’ small council. Members in attendance: Varys, Grey Worm, Missandei and Lannister himself. First order of business: The masters of Astapor and Yunkai have retaken the cities, meaning Mereen is the only city Daenerys freed. Second order of business: Tyrion’s brief history of dragons (they love to be wild, they eventually wither and die off in captivity) before taking a torch and Varys to visit Daenerys’ babies, who are still chained up in the crypt, refusing to eat.

Though they initially growl fire his way, Tyrion sweet talks the scaly beasts into recognizing him as a friend, so they don’t flambé him as he pets their necks and removes their chains. Is it weird that after he frees them, I think for a moment the dragons are going to hug? Probably. Anyway, the dragons crawl back into the darkness and Tyrion and Varys skedaddle before one or both of them becomes a shish kabob.

THE MEN OF THE WALL | The time has run out for Ser Davos and the men protecting Jon Snow’s body. Alliser knocks on the door, still promising peace, but the way his men have their weapons drawn sends a completely different message. So does his decision to hack the door down with an ax. Just as he breaks through, a loud sound from just outside the gates stops everyone cold: It’s a giant, and he busts into Castle Black with the Wildlings and Dolorous Edd, effectively ending the hostilities (but no one tells Olly, who tries to Ygritte Torumund out of existence. Nice try, little jerk. Stay in your lane.)

Davos later goes to see a melancholy Melisandre, who’s staring into the fireplace in her room. He wants to talk about Jon Snow, the “former Lord Commander,” as she notes. “Does he have to be?” the knight asks. She tiredly replies that “some” have the power to return the dead to life, but she’s not the man for the job. He lists her applicable skills (drinking poison and living, giving birth to a demonic smoke demon of demony badness), then bucks her up: “I’m not asking the Lord of Light for help. I’m asking the woman who showed me miracles exist.” She looks like she’s about to cry as she says she never had the gift of reanimation. Well, he wonders, “Have you ever tried?” 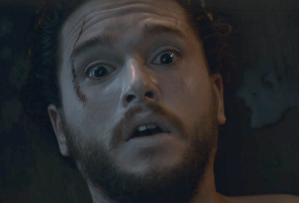 So the Red Priestess washes him, clips some of his hair, does some chanting, stroking and burning, then lays her hands on his chest and chants some more. When it doesn’t work, she whispers, “Please…” but nothing happens and everyone leaves except for Davos and Ghost. Finally, even Davos exits the room… then Ghost gets up. And Jon takes a breath. And another. Yep, he’s alive!

HOUSE STARK: THE STREETS AIN’T FOR NO ONE EDITION | The Waif comes around and delivers Arya’s daily beating, which goes a little better than the last one we saw. Then Jaqen shows up and tempts Arya with the promise of shelter, food and her returned eyesight if she’ll just say she’s Arya Stark. “A girl has no name,” she replies each time, which is the right answer, and he leads her away.

HOUSE BOLTON: FAREWELL FATHER EDITION | With Sansa still gone, Ramsay suggests that the Bolton army storm The Wall, where she’s surely headed. Roose is not on board with that plan at all — mainly because it’s a terrible one — but the men are interrupted by the news that Walda has just given birth to a baby boy. Which means that Roose now has a legitimate heir. Which means that Ramsay is of no real use to him anymore. So after a congratulatory hug from the bastard and a few words of consolation from his dad (“You’ll always be my firstborn”), Ramsay stabs his dad in the gut a couple times and kills him. Send word throughout the north, Ramsay then tells the shocked maester, who’s seen the whole thing: Roose is dead, poisoned by his enemies.

As if that weren’t enough horror from the Bolton clan for one episode, Ramsay then leads an unsuspecting (and oblivious to the death) Walda into the kennels and unlocks some of the violent dogs’ cages. “Where is Lord Bolton?” she asks, hysteria growing. “I am Lord Bolton,” he replies calmly. “Please, Ramsay, he is your brother!” she pleads. “I prefer being an only child,” he says, whistling (oh god no) for the dogs (oh god he’s going to do it) who fall upon the woman and her newborn as we hear their screams.

HOUSE STARK: THEON, OUT! EDITION | Brienne fills Sansa in on seeing Arya with The Hound. “I should have gone with you when I had the chance,” Lady Stark tells her new protector, who consoles her by saying, “It was a difficult choice, milady. We’ve all had to make difficult choices.”

Speaking of which, Theon has made his own tough decision: He’s not coming with them to The Wall. “I would have died to get you there,” he says, crying after saying that he doesn’t want to be forgiven for the awful acts he committed against the Starks. She hugs him, and he asks for a horse: He’s going home.

HOUSE GREYJOY: WHAT IS DEAD MAY… NEVERMIND EDITION | Yara briefs her father on the Ironborn loss at Deepwood Motte. “We can defeat anyone at sea,” but their holdings on land are much more tenuous, she explains. He doesn’t want to hear it, and storms out, running into his brother who’s been presumed dead and/or crazy for some time. “I am the first storm, and the last, and you’re in my way,” Yara’s uncle tells Balon, then pitches him over the side of a swaying rope bridge in the middle of a storm.

At Balon’s funeral, Yara swears to find the murderer and feed him alive to the sharks. She assumes she’ll take over as ruler of the Ironborn, but an elder informs her that she’ll have to fight for it like everyone else.

What did you think of this week’s insane episode? Did you truly think Jon was gone for good? Let us hear about it in the comments!