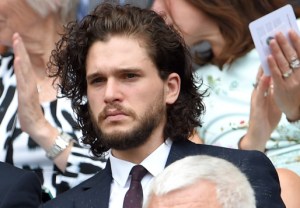 Ever wonder why Kit Harington‘s hair is so big? It’s because it’s full of secrets.

Photos of the  Game of Thrones star attending Wimbledon — with his signature Jon Snow locks very much intact — surfaced this weekend, sending fans into a hopeful tizzy. (Could this be a sign that Harington plans to return for Season 6, after all?)

Now that the HBO series has finally caught up to George R.R. Martin’s novels, it’s anyone’s guess what the future holds (or doesn’t hold) for Harington’s fan-favorite character, who appeared to meet his demise in the final moments of the June 14 finale. There are any number of ways he could return to the living — Melisandre arriving at the Wall just before his death couldn’t have been a coincidence — and many distraught fans are choosing to see Harington’s luscious locks as a sign of hope. (He reportedly got a haircut shortly after filming the finale.)

Let’s be honest, though: It’s entirely possible this is much ado about nothing. Though Harington famously kept his hair long to play Jon Snow, he recently mentioned to Vulture that he would grow it back if a role — any role — called for it. At this point, we have as much proof that Harington is starring in a reverse-gender live-action version of Tangled as we do that he’s returning to Thrones.

Still, it’s always fun to speculate — and for now, it’s all we’ve got. What are your theories about Jon Snow’s Thrones revival? Is Harington’s hair a valid clue? Drop a comment with our thoughts below.