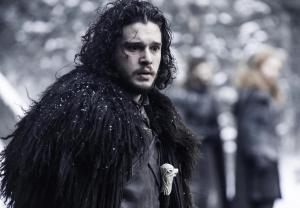 Imagine you’re the lead singer of a rock band playing a sold-out stadium — who’s made the unprecedented move of booking Lady Gaga and the Rolling Stones as your opening acts.

You’d be in a similar predicament, then, to the good folks tasked with writing Game of Thrones‘ Season 5 finale — following directly on the heels of the thrilling “Hardshome” (AKA that episode where the White Walkers rip up the free folk like so many losing Powerball tickets) and “The Dance of Dragons” (Khaleesi rides Drogon! King Spineless and the Red Beyotch burn an adorably poetic girl princess at the stake!).

I mean, how do you one-up those kinds of huge, impactful moments and ensure your finale isn’t met with a shoulder shrug and a droll, Olenna Tyrell-esque quip like, “You can smell the s–t from five miles away”?

I guess you could have Cersei beat that austere Faith prison warden to death with her ladle. Or you could devote the entire hour to Sansa Stark dismantling Ramsay Bolton with a paring knife. (“TV’s feel-good moment of 2015!” — TVLine.) The return of the Hound? A sunny, 85 degree day at The Wall? Melisandre calling the Long Island Medium for some psychic-friendly advice?

OK, this is why George R. R. Martin’s never Direct Messaged me on Twitter and asked for story ideas for that book that he’s definitely, probably, almost without a doubt, halfway sorta finished writing.

So let’s put my speculative powers to bed — and cut to the most crucial developments from “Mother’s Mercy” (bearing in mind I’ll be back in an hour or so with a more fleshed-out take on the proceedings). 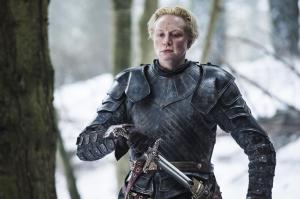 * Melisandre gets all smug when, in the wake of Shireen’s murder, the snow begins to melt. But things start looking a little less “Everything’s coming up roses!” when Stannis’ wife (name not worth mentioning, since she did nada to protect Shireen) hangs herself, Stannis learns more than half his men (and horses) have deserted him in the wake of the Worst Bonfire Ever, and then Melisandre abandons camp on one of the last remaining steeds. (We can all agree now that she’s just a pyromaniac with unusually good powers of persuasion, right?) Apparently the Red Woman saw defeat in her king’s future? As Stannis proceeds with his plan — attack Winterfell at sunrise! — he gets another “Oh, snap!” surprise, as Ramsay and his much bigger army descend on him, and leave ’em all bleeding out in the snow. Stannis is staggering, badly wounded, when Brienne of Tarth arrives, seeking vengeance for Renly’s black-magic death, and she cuts him down with about 1,000,000 times less effort than she used to fight off the Hound about a year ago. This is how Stannis’ claim to the throne ends, not with the roar of a dragon, but with a “whatever.”

* Sansa plans her mid-battle escape from Winterfell, but is sidetracked by Ramsay’s terrible strumpet, wielding a bow and arrow and threatening mutilation. Reek intervenes, knocking the enemy to her death, and the tormented siblings leap off the castle wall, into the snow and into… freedom? broken bones? hypothermia? Only time will tell. I could’ve used a bigger win for Sansa to end the season, but hopefully she continues growing into her power — and learns the power of the sword/poison/noose in Season 6. 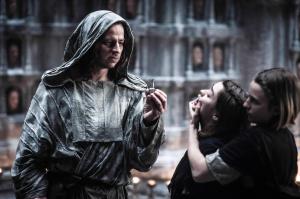 * Arya sneaks back into the brothel where Meryn Trant is abusing multiple underage girls, stabs him in the eyes, reveals her identity, then slits his throat with more mercy than he probably deserved. Back at the temple of the Many-Faced God, though, she’s told by Jaqen H’ghar she took the wrong life — and he poisons himself (because only death can pay for life, apparently). When he drops to the ground, though, it turns out it’s not him, not exactly, or else, more likely, it’s no one. (Got that?) Arya rips off his face, then another, then another, then sees her own — and goes blind. “What’s happening? What’s happening?” she asks, speaking for all of us.

* Daario and Jorah decide to head out in search of Khaleesi — leaving Tyrion, Missandei and Greyworm to rule Meereen. Good thing, then, that Varys arrives in the nick of time, willing and ready to spy for the good guys. I’m glad Tyrion didn’t have to strangle someone he loved as a bookend to Shae’s Season 4 choke-out, but still, I won’t lie and say I didn’t want a little more Peter Dinklage awesomeness to cap off this all-too-brief GoT season. 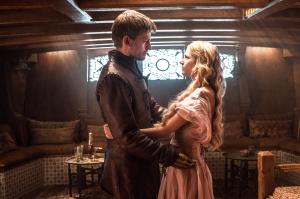 * Jaime admits to Myrcella that she’s the product of incest between her mother (Cersei) and himself (Cersei’s brother), and she’s all, “Whatevs, pops, LOL, it’s all good, Oh Em Gee.” That is until she begins bleeding from the nose, heading toward death, the victim of Ellaria’s poisoned kiss. (Not to worry, the weren’t-they-supposed-to-be-more-ferocious Sand Snakes’ mom takes an antidote to the deadly liquid, and will live to plot another day.)

* Cersei “confesses” to the high sparrow that she cheated on her husband, with her cousin, but lies and denies that her children are a product of an incestuous relationship with her brother. She’s subjected to the longest, nakedest, most gratuitous shaming imaginable — honestly, we only needed an eighth of the footage to get the point — then is met by a new (armored) knight who’s pledged a vow of silence til her enemies are vanquished. (Is it the Mountain? The Hound? Bran on a diet of Muscle Milk and one-eyed crow?) 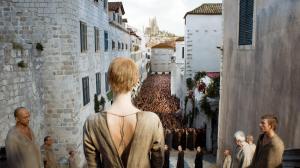 King Tommen — wait, he’s actually KING? I keep forgetting! — doesn’t even greet Mommie Dearest at the palace gates, but we don’t need him anyway, do we? And while yeah, maybe she’s the villainess in all this, I still can’t wait to see Cersei exact the most horrific revenge on her power-grabby, hiding-behind-piety enemies this time next year. (Can you behead someone with the handle of a ladle? I sure as heck hope so!)

* In the closing 120 seconds, after Melisandre arrives at the wall (hrrmmmm…suspicious!), Jon Snow gets stabbed to death by his men (et tu, Olly?!) in the name of the Night’s Watch. Good thing Sam, Gilly and baby have already left the building! It’s sad to see Jon bleed out on the pristine white ground, and yet, haven’t we learned that those who do good on Game of Thrones are doomed to meet a bad end? Don’t get me wrong: I’d have loved to see the dark-haired and very brave beauty fight on in Season 6 — hey, where was his new BFF Raymun Redbeard when ish went bad? — but I’d have been far more apoplectic if Daenerys or Arya had wound up dead. (Raise your hand if you concur!)

* Oh, and speaking of Daeny, when she finally lands with Drogon, she’s hoping he’ll take her back to Mereen and her pals, but he clearly needs a long, restorative nap. But just as I start wondering if she’s going to burst into “The Sound of Music” in her lush hillside retreat, we hear the thundering of hooves. Khaleesi drops a ring into the grass — honestly, the significance escapes me, so if you’re a better GoT historian, please drop your knowledge in the comments — and moments later, is surrounded by Dothraki on horseback. Are they hostile, jubilant, just in the midst of some equestrian exercise? We won’t find out ’til next spring, unfortunately.

What did you think of Game of Thrones’ Season 5 finale? Take our poll below, then sound off in the comments!