Game of Thrones‘ Bran might wanna write Kristian Nairn‘s mom a thank-you note: Nairn’s mama is directly responsible for the fact that her son was able to “hold the door!” for the Stark heir in Sunday’s terribly sad episode.

Back when Nairn first read for the part of Bran’s gentle, dim-witted attendant, “I hadn’t a clue what Game of Thrones was. My agent, he was like, ‘Just bear with me, Kristian. Just go and do this. There’s no words to this part, but I can assure you it’s worth doing,'” the actor tells TVLine.

And when his mom, who was “a massive Game of Thrones fan, unbeknownst to me at the time” heard about the audition, “She just sort of looked over her glasses and said, ‘Really? I’ve just read that for the fifth time. Which character?'” he adds. “This is the first time I’ve remembered this: I think she just knew I was going to say, ‘Hodor.’… She goes, ‘You have to take that part, Kristian. It’s going to be an amazing show. It’s up there with Lord of the Rings and stuff. You have to take this seriously!'” He laughs. “OK, Mommy!”

When we joke that Nairn’s mom deserves a cut of his success, he chuckles and shoots back, “[What] makes you think she hasn’t already got one?!”

Fans of the HBO drama watched with sadness on Sunday as Nairn’s character, in a final, heroic act, put himself between a comatose Bran and encroaching army of wights and white walkers — while in the past, Bran witnessed Wylis’ brain scramble as he heard Meera exhort him to help them. “Hold the door! Hold the door” the boy cried, eventually rambling, “Hold… door… Hodor.”

Below, hear what Nairn — who only ever uttered those two syllables during his six seasons on the hit series — has to say about Hodor’s valiant ending.

TVLINE | Talk to me about shooting that last scene. What was actually happening versus what we saw? I imagine a lot of those effects were put in afterward.
You’d be surprised how much of it was real, to be honest. It was filmed in three different locations. From the inside, when Hodor closed the door, initially, that was in Banbridge interior. And also the tunnel was there. The exterior was at Magheramorne Quarry, where Castle Black is. And then we filmed all the close-ups in Paint Hall [Studios]. We should’ve actually called the [episode] “The Doors,” because I think there were, like, seven doors all together. [Laughs] We had all these vicious stuntment, dressed like wights and white walkers, pouding their way through the door, and they kept wrecking ’em.

It was very physically intense, because there’s no real way to act pushing back a door like that; you have to push. And they were pushing against it and hammering it. At one stage [Laughs] Jack Bender, the director, was, not punching me… well, he was actually. [Laughs] He was punching me to make sure my body was reacting in the right way.

TVLINE | Oh my goodness.
Yeah, and this was with a 100-mile-an-hour wind with false snow whipping into your face. Every single time, we had to reset the snow in my hair and makeup. You can imagine, we would do this, it would be, “Cut. Reset Kristian.” So they had to get all this tiny, minute false snow out of my hair and makeup. And redo my scar. And the other horrible thing was, I had this massive, disgusting scab on my forehead. I think I had a skin tag removed. And the stunt men kept knocking it off. Some of the blood was real. [Laughs]

TVLINE | You actually bled for Hodor.
Trust me, it’s not the first time I’ve suffered for Hodor. [Laughs]

TVLINE | Summer also goes in that episode. It hasn’t been a good time for the Stark family’s direwolves. Did you have any reaction, watching that death play out?
Yeah. It’s terrible! Sometimes I say that animal deaths are sadder than human deaths. I think it happens very quickly with Summer. It’s so sad. When you think about those little puppies and the first day, remember the first episode when they found the pups? And now they’re getting slaughtered left, right and center. It’s so sad. I can’t stand animals being killed… horses getting their heads chopped off. Thank God it’s not real.

TVLINE | Summer and Hodor have been Bran’s two mainstays for the entire run of the show, and now they’re both gone. Based on what you know about the character, how do you think that will affect Bran moving forward?
You can see in the scene, his face, he’s really concerned about what he realizes he’s done to Wylis in the past. I think he’s going to be riddled with guilt. Although he’s a bit reckless, I don’t think he ever wanted to kill anybody or hurt anybody. It’s kind of weird… it’s hard for me to separate Hodor and Bran’s relationship from mine with Isaac Hempstead Wright. But I don’t know if he really appreciated Hodor, as Bran. We’re going to find out. Here’s this guy who only ever wanted to help. He was uprooted from his home [and dies] after a life of cabbagedom, all at the hands of Bran’s mental torture. [Laughs]

TVLINE | No one is safe on this show. Had you considered how Hodor might die?
My one wish was that he did die in a big way. It was always a joke that Hodor was going to take the Iron Throne, that he was some sort of warg or he was hiding his true identity — I kind of liked that one… If there’s a way to go and make a mark, I can’t think of any better way. I got my wish. It’ll always be remembered. 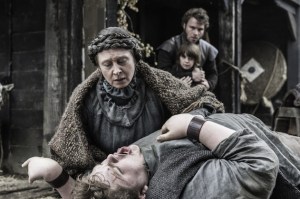 TVLINE | Did you and Sam Coleman, who plays young Wylis, talk about playing the same character at different stages of his life?
I haven’t met Sam. It’s not usual — a lot of the cast members haven’t met each other. He did such a phenomenal job. He really did. I hope to meet him someday. I’m sure somewhere down the line at some, like, I don’t know Nebraska Comic-Con we’ll be doing photo ops for $10 each, $15 for double Hodor. [Laughs]

TVLINE | Is it in a place of honor?
I’m in the middle of moving houses, so it’s buried in a pile of things I have from Game of Thrones, like [season] wrap gifts, just little things that you can only get if you were in the show — which, when I run out of money, I intend to put on eBay. [Laughs]

Watch Nairn’s final Game of Thrones scene below, then hit the comments with your eulogies for Hodor.