Need to catch up? Check out last week’s Game of Thrones recap for Season 6, Episode 9, “Battle of the Bastards,” here.

As Game of Thrones‘ sixth season draws to a close, a quote from the beloved Syrio Forel seems apt: “There is only one god, and his name is Death. And there is only one thing we say to Death: …um, how does Sunday at 9 work for you?”

So. Many. Deaths. in the finale! Margaery, Loras, the High Sparrow and everyone else in the Sept of Baelor. Tommen. Walder Frey. And that’s long before we get to Daenerys’ navy shoving off or Jon’s true parentage pretty much confirmed or Queen Cersei ascending to the throne.

We’ve a lot to get to in this extra-long episode, so read on as we review what happens in the Season 6 finale, “The Winds of Winter.”

HOUSE LANNISTER | As morning dawns in King’s Landing, Cersei, Tommen, Margaery and the High Sparrow get dressed for the big trials that will take place that day in the Sept of Baelor. Meanwhile, one of Qyburn’s sparrows arrives at Gran Maester Pycelle’s chambers and whispers something in his ear.

First up before the High Sparrow is Loras Tyrell, who confesses to his crimes: “All of them. I lay with other men, including the traitor Renly Baratheon,” he says, adding a bunch more naughty acts before kneeling before the holy man and saying that his only remaining wish “is to devote my life to The Seven” — aka abandoning the Tyrell name and his claims on Highgarden, and leading a life of celibacy. So while Margaery and her father look on, the faith militant’s symbol is carved into Loras’ pretty forehead. “The faith is the way, father,” Marg says, holding her dad back when he tries to interfere.

Back at the Red Keep, Cersei is pouring wine, putting on jewelry and basically not caring about the fact that her trial is about to begin. However, when Tommen prepares to leave for the event, The Mountain stands in his way. Why? Well, the presence of several sparrows flitting about the city is one clue. Pycelle being lured into Qyburn’s creepy lair and murdered by a knife-wielding flock of feral sparrows while the faux maester talks about doing away with the old to make way for the new? That’s another hint. And when yet another kiddo lures Lancel — who was sent to retrieve Cersei — down under the city and then stabs him near a giant cache of wildfire, it’s clear that Mad Queen Cersei is a go.

“We all need to leave, now!” Margaery tells everyone at the sept, having figured out that if the queen and Tommen aren’t there, there’s a very good reason for it. But the faith militant won’t allow anyone to leave. Underneath the religious building, Lancel crawls toward candles lying in pools of the green, highly flammable substance but can’t put them out in time. And as the beautiful score builds, the wildfire ignites and the building blows — with the breeze ruffling Cersei’s bangs from where she watches from her window at the Red Keep.

“Confess,” she later says, pouring wine into the face of the septa who shouted “Shame!” throughout her walk of atonement and whom she has apparently kept prisoner. Now THIS is the Cersei I know and love. “You’re not going to die today. You’re not going to die for quite a while,” the queen regent coos to her captive as she beckons The Mountain into the room and prepares to exit. “Your gods have forsaken you. This is your god now.” And then, because my girl knows how to make an exit, she chants, “Shame! Shame! Shame!” while closing the door on the nun’s horrified screams.

And then Tommen takes off his crown, steps into his window, and leaps to his death. OH GOOD GOD WE ARE NOT EVEN HALFWAY THROUGH THIS MOTHER YET. “Burn him,” Cersei says upon seeing her dead son’s body. “Bury his ashes where the sept once stood.”

HOUSE LANNISTER: FREY’D NOT EDITION | At a celebration over the Riverrun victory, Jaime is rather reserved while Walder Frey gloats about the win. He calls them “two Kingslayers,” but Jaime quickly puts him in his place: If the Lannisters have to ride north every time the Freys lose the Riverlands, he asks, “Why do we need you?”

The next day, Frey angrily wonders where his two sons are, and his new serving girl says, “Here, my lord.” She’s indicating the pies he’s eating, which she made with their bodies, and oh my lord, it’s ARYA. She pulls off a face and makes sure the old jerk knows that a Stark is sending him to his eternal torment. Then she slits his throat and, well, the Starks send their regards, dude.

HOUSE TARLY | Sam, Gilly and Little Sam make it safely to The Citadel, where he proudly presents himself as a trainee for maesterhood. Sam’s happy to be let in the door, but Gilly and the baby have to wait outside while he peruses the library — think Beauty and the Beast‘s Belle singing, “Ohhhhh, isn’t this amazing!” as she rides around on a book ladder, and you’ve got an idea of his reaction to the world-class knowledge repository — and awaits word on whether he can continue.

HOUSE SNOW | At a now-empty Winterfell, Jon and Melisandre compare terrible childhoods until Davos runs in and throws Shireen’s carving at the Red Woman. “Tell him what you did to her!” he says. And she does, saying, “It was the only way.” Davos is beside himself. “If he commands you to burn children, your lord is evil!” he yells tearfully. She admits she was wrong, but it doesn’t help: Davos wants to kill Melisandre, and when given a chance to speak in her defense, she argues that she can help him win the approaching war with the white walkers. “Ride south today. If you return to the north, I’ll have you hanged as a murderer,” he answers — and Davos promises to do it himself if he ever sees her again.

Later, Jon tells Sansa he’s having the main bedroom prepared for her. “I’m not a Stark,” he says. “You are to me,” she replies. Plus, he adds, she-via-Littlefinger’s-forces saved the day at the battle. She apologizes for not telling him about summoning the Knights of the Vale, he kisses her forehead and says they need to trust each other, and they talk about how a white raven arrived from the Citadel: “Winter is here,” Sansa says as it snows.

HOUSE STARK: EEW EDITION | Littlefinger wants to sit on the Iron Throne, and he wants Sansa next to him, but she’s not down with that. “I’ve declared for House Stark,” he says just after she dodges his kiss; yeah, that and a quarter will buy you a nice, juicy nothing burger.

Later, when Jon is having trouble rallying all the Stark bannermen to the cause, the totally awesome Lyanna Mormont shames all these lame old men into doing the right thing by supporting Snow. “He’s my king, from this day until his last day,” she says. (Side note: I cannot love this kid more. Can’t. Impossible.) And when Lord Manderly declares that Jon Snow is “the King in the North,” it’s only a matter of moments before the rest fall in line and start chanting it. But, as Sansa sees, Littlefinger stays quiet.

HOUSE TYRELL | The Sand Snakes invite Lady Olenna to Dorne, positing that they should team to take down the Lannisters. And when she rings a bell, Varys appears, promising “fire and blood.” OK, intrigued… 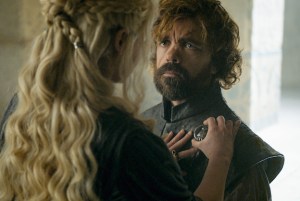 HOUSE TARGARYEN | Daenerys, in perhaps the classiest let-down ever, commands Daario to stay in Meereen and keep the peace… so she can make alliances via marriage. “Are you a queen or fishbait?” he asks angrily. “I can’t bring a lover to Westeros,” she says. “I don’t want a crown. I want you,” he maintains, offering himself up as her mistress man-stress as he pledges his love. “Bring me with you. Let me fight for you.” But, nope. So he licks his wounds, bows to his lady and leaves… then she meets up with Tyrion to process. “That’s the kind of self-sacrifice that makes for a good ruler, if it’s any consolation,” he says. “It’s not,” she counters.”

Tyrion refocuses the decision: Let’s talk about how everything you’ve wanted is actually happening, he says. “You’re in the great game now, and the great game is terrifying,” he adds. When she still wants to talk about Daario, Tyrion quietly says, “He wasn’t the first to love you, and he won’t be the last,” and WAIT A MINUTE. He’s totally into her, isn’t he? It certainly seems that way when he pledges his counsel to her “now and always” and she gives him a Hand of the Queen pin and oh great, now I’m ‘shipping Tyrnaerys.

HOUSE STARK: YOU’VE-BEEN-WAITING-FOR-THIS EDITION | Benjen takes Meera and Bran as far as he can — there’s some talk about how magic keeps dead things (which he kind of is) from entering then takes off. And so Bran makes his way to a weirwood tree, places his hand on it, and is instantly back at the Tower of Joy with young Ned Stark on his way up to a screaming Lyanna. The bed is, indeed, soaked with blood — like, way too much blood — and she’s not doing well in wake of giving birth. There’s an attendant with her, but it’s clear that L is dying. So she whispers something in her brother’s ear; the conversation includes her saying, “If Robert finds out, he’ll kill him. You know he will.” And she makes him promise her something — which all you R+L=J enthusiasts know is that Jon is really a Targaryen — as the attendant hands Ned the infant. Raise your hand if you love rewarding payoff to seasons-long storyline!

HOUSE LANNISTER: SCORCHED-EARTH EDITION | Not long after, Jaime returns to King’s Landing, horrified to see a giant, smoking crater where the sept once stood… and Cersei sitting the Iron Throne, flanked by Qyburn and The Mountain. Elsewhere, the Ironborne navy — with Daenerys, Tyrion and the dragons — sets sail for Westeros.

Now it’s your turn. Grade the finale via the poll below, then hit the comments to elaborate upon your thoughts!