Need to catch up? Check out last week’s Game of Thrones recap for Season 6, Episode 8 “No One,” here.

What a royal bastard!

And thankfully, that insult is the closest Ramsay Bolton will ever get to any kind of actual title, given that Jon Snow & Co. not only retake Winterfell in this week’s Game of Thrones, they also see to it that Ramsay won’t hurt anyone. Ever again. Woof.

Read on as we review what happens in “Battle of the Bastards.”

HOUSE TARGARYEN | The assault on Meereen continues, and a flaming cannonball’s eye view of how badly it’s all going ushers us into the hour. “Despite appearances, I think you’ll find the city’s on the rise,” Tyrion nervously tells Daenerys. You’ll have to forgive the Mother of Dragons if she can’t hear you over the blasts shaking her palace, Lannister. Still, Dany isn’t worried; she’s planning to kill ’em all and let The Seven sort it out. Tyrion likens her plan — to destroy the masters’ cities — to the Mad King’s stashing of wildfire underneath King’s Landing back in the day (more credence for that Cersei-wildfire theory?) and suggests they try diplomacy first.

So Daenerys meets with the representatives of the attacking cities and they patronize her, telling her, “Your reign is over.” She side-eyes them in a way that only someone with a freaking dragon at her command can and calmly replies, “My reign has just begun.” Then the great winged beast arrives, nuzzles his momma like a good little mythical creature and carries her off on his back. Then, his siblings break their way out of their dungeon and join them. And THEN, khaleesi’s Dothraki army ride in and start cutting off the heads of Sons of the Harpy fighters. All that’s left, really, is for Ms. Stormborn to say “Dracarys” into her dragon’s ear, giving her pets the signal to destroy a good part of the attacking fleet.

Back at the site of the formerly diplomatic meeting, Tyrion notes that the masters reneged on their pact with Daenerys’ people, and so Grey Worm kills two of them and Lannister informs the Ismael that’s left to tell the story of “what happened when Daenerys Stormborn and her dragons came to Meereen.” And we’re not even 10 minutes into the episode, guys!

Later, the Greyjoy siblings stand before Daenerys and Tyrion, who remembers what a jerk he was when he was a younger man at Winterfell. They make their case: They’ll lend their ships to the Targaryen cause if Daenerys supports Yara’s play for her own throne. “Has the Iron Islands ever had a queen before?” Daenerys asks. “No more than Westeros,” Theon’s sister shoots back. (Side note: I very much enjoy the sassy way these two interact in this scene. No, not “interact.” Straight-up flirt.) As part of the deal, Dany demands that the Ironborn will no longer rove, reap, rape and a few other distasteful verbs beginning in R. “No more,” Yara agrees after a moment, and the two women clasp forearms. Oh, I like this lady takeover a LOT. 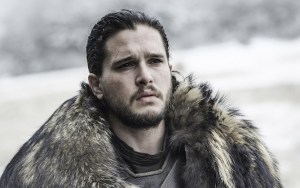 HOUSE STARK-AND-SNOW: NIGHT-BEFORE-BATTLE EDITION | Jon and Sansa meet Ramsay on a field, where Bolton addresses the redhead as “my beloved wife” and I throw up in my mouth a little. Oh, and calling himself a “man of mercy,” Ramsay demands that Jon kneel before him. Jon’s counter offer: a one-on-one fight between the two of them, rather than having all of their men battle and possibly die. Ramsay’s all, “You’re a better swordsman than I am, but I have a bigger army, so… nope.”

There’s a bit about Ramsay threatening Rickon, who is still in his custody, but Sansa won’t bite. “You’re going to die tomorrow, Lord Bolton. Sleep well,” she says coldly, riding away. “In the morning then, bastard,” Ramsay addresses Jon, who now looks like he could use a Tums.

Back at Stark Army Central, Davos and Jon discuss that Ramsay’s men likely aren’t loyal — but Tormund says it won’t matter, because they’ve got horses, and armed men on horseback are really, really lethal. The basic plan: Surround Ramsay on three sides with a pincer move. With that decided, they all retire to rest — except Jon and his sister, who makes the pretty good case that she knows the enemy better than any of the men. “If you think he’s going to fall into your trap, he won’t. He’s the one who lays traps,” she says. “I’ve fought beyond The Wall against worse than Ramsay Bolton. I’ve defended The Wall from worse than Ramsay Bolton,” he says, a little frustrated, then asks how she wants to get Rickon back. I’m taken aback by the matter-of-fact way that Sansa says they won’t get their brother back, because as the only living true-born son of Ned Stark, the boy is a greater threat to Ramsay than even Jon. “If Ramsay wins, I’m not going back there alive. Do you understand me?” she vows. And when Jon pledges to protect her, Sansa utters the most Game of Thrones-iest thing I’ve ever heard her say: “No one can protect me. No one can protect anyone.”

Jon then visits Melisandre for advice. “Don’t lose,” she says drily. “If I do, if I fall, don’t bring me back,” he says — and she says no! “I serve the Lord of Light. I do what he commands,” she reasons. “If the Lord didn’t want me to bring you back, how did I bring you back? I have no power, only what he gives me, and he gave me you.” But she’s not happy about it; I’d call her mood somewhere between “melancholy” and “fatalistic.”

Meanwhile, while Davos is walking to deal with his pre-fight nerves, he comes across the place where someone was clearly burned at the stake — and finds the carved wooden stag he made for Shireen there. Oh nooooooo.

HOUSE STARK-AND-SNOW: IT’S-ON EDITION | The morning of the big fight, Jon and his men are greeted with several flayed and burning Bolton victims lit like ghastly luminaries. Ramsay marches Rickon out onto the field and raises his knife… then cuts the Stark kid loose and tells him to run toward Jon. Then Bolton notches an arrow into his bow and takes aim at the moving target. God, I hate this guy SO MUCH. Jon completely ignores all of Sansa’s advice, instead jumping on his horse and riding at a full gallop to save his brother. And just before Snow reaches him, an arrow gets Rickon through the chest and he dies. 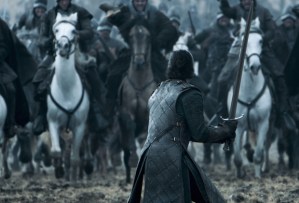 “Don’t,” Tormund whispers, way too far away for Jon to hear. But it doesn’t matter, because Jon is already charging the Bolton army, and Davos gets the rest of their side following him a moment later. (Side note before I’m too sad and/or happy over the episode’s outcome to remember to say it: This battle looks insane! So beautifully shot.) When arrows take down Jon’s horse, he winds up standing before the advancing enemy horde with nothing but his sword to protect him. And at the moment that it seems like Snow will go down, his backup arrives.

If ever I doubted that the Lord of Light or The Seven or whoever is up there has taken a shine to our boy Jon, the fact that he evades near-certain death several times each minute of this battle (falling horses! volleys of arrows! swinging axes!) makes that bloody clear. But then the Bolton soldiers completely surround Jon and his men, forming a wall with their shields and advancing with pointy killing things every few seconds. It’s like the trash compactor scene from Star Wars: A New Hope, with way less banter and way more blood.

At one point, Jon gets knocked to the ground and fights to breathe as the battling horde tramples him. (Side note: So. Much. Hand-held. Camera work. Must. Not. Puke.) But he fights his way to clear air just in time a) for Tormund to incur a really bad wound, and b) to hear the horn of an approaching army: It’s Littlefinger and his men, who’ve arrived at Sansa’s request. They ride into the scene like hungry ants on a piece of dropped watermelon, but Jon’s too busy sprinting after a retreating Ramsay to care.

Poor Wun-Wun the giant makes himself into a pincushion, so many Bolton arrows does he take, but he beats down the door of Winterfell and allows Jon and the rest to enter the gates before he dies. (Of course it was Ramsay’s own arrow that finally takes the giant out.)

And so it comes down to exactly what Jon suggested in the first place: Him and Ramsay going at it, one-on-one, in the Winterfell courtyard. Jon beats Sansa’s husband into a bloody paste while she watches; and we’re happy about this, right? Because no one seems happy, least of all Sansa, who visits Ramsay in the cell where he’s being kept. “You can’t kill me. I’m part of you now,” he mocks, but she steadfastly reminds him that everything about him will disappear, starting when one of he hungry canines he bragged about not feeding for a week approaches him like he’s wearing Eau du Milkbone. It licks. It sniffs. AND THEN THE DOG EATS HIS FACE. Too much, Game of Thrones. Literally, too doggone much.