Warning: Spoilers for Game of Thrones’ Season 6 finale ahead.

Lords, step aside: It was Game of Thrones‘ ladies who ruled the Season 6 finale — one of ’em, literally.

But long before Cersei left the Sept of Baelor a smoking pit of rubble and sat her queenly tush on the Iron Throne, she had a rather satisfying moment with Septa Unella. Likewise, up north, little Lyanna Mormont employed a charming blend of shame and pluck to rally the fraidy-cat Stark bannermen to Jon’s cause.

And because we’re still reeling from the awesome, sweeping, game-changing episode, we thought you might like to relive Cersei and Lyanna’s monologues with us. The text of both is below; we’ll add video if/when it becomes available. 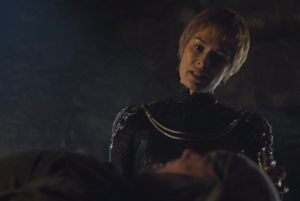 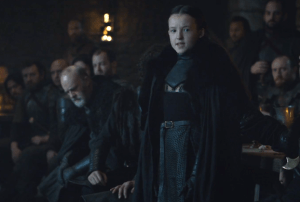 LYANNA MORMONT AT WINTERFELL
“Your son was butchered at the Red Wedding, Lord Manderly. But you refuse the call. You swore allegiance to House Stark, Lord Glover. But in their hour of greatest need, you refuse the call. And you, Lord Kerwin, your father was skinned alive by Ramsay Bolton, still, you refuse the call. But House Mormont remembers. The North remembers. We know no king but the King in the North whose name is Stark. I don’t care if he’s a bastard. Ned Stark’s blood runs through his veins. He’s my king, from this day until his last day!”

What are you waiting for? Get to practicing these in front of your mirror! (And hit the comments with your thoughts on the speeches.)