The following post contains a major spoiler from Sunday’s Game of Thrones.

No, the Game of Thrones sadist didn’t actually utter those words in Sunday’s episode, but he might as well have: The bastard’s attack on his father, Roose Bolton, was as surprising — and fatal — as the blow Roose struck Robb Stark at Season 3’s infamous Red Wedding.

Roose’s death, an event that has not yet occurred in George R. R. Martin’s novels, happened just after the Bolton men learned that Roose’s wife Walda had given birth to a son — AKA a legitimate heir, and a threat to Ramsay’s future status as head of the family.

The murder was a long-awaited payback for the loathed traitor. (As fans will recall, the elder Bolton was the mastermind behind the massacre at Edmure Tully’s nuptials; as he jabbed a blade into Robb Stark’s belly, he said, “The Lannisters send their regards.” Robb’s mother, Catelyn, and his pregnant wife, Talisa, also died that night.)

The Lord of the Dreadfort was so due for karmic comeuppance that star Michael McElhatton wasn’t shocked when he heard he’d be Season 6’s first major death, the actor tells TVLine in an exclusive interview.

After Ned Stark’s sudden, horrifying death in Season 1 of the HBO series, “You’re always aware that anybody can go at any time,” McElhatton says a few weeks before the episode airs. “One of the great achievements of Game of Thrones is that everybody knows at least 10 characters are going to die every year, and yet it is always a shock when they do die. It’s a tremendous testament to the writing and direction and everything that you still get shocked and surprised by that.” He laughs. “Hopefully, it will have the same effect on the audience when I buy it.”

Read on for more of our chat with McElhatton, including his thoughts on what drastic measure Daddy Deadliest might’ve taken if Ramsay hadn’t struck the final blow.

TVLINE | Do you think the way Roose goes out is a satisfying end for fans who’ve wanted that character to get his ever since the Red Wedding?
I definitely think so… Yeah, I think a lot of people are going to be very happy. Of course they are! [Laughs] 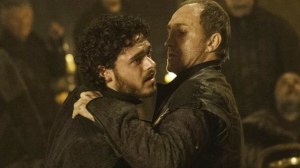 TVLINE | When you’ve run into fans, do they give you a hard time? Do they quote your Red Wedding line and things like that?
They do say “The Lannisters send their regards,” though I haven’t had that in quite a few years. Iwan [Rheon] and I get asked all the time. [Laughs] We get respect, though. We don’t get anybody throwing things or spitting on us. It’s safe to walk the streets.

TVLINE | In the season premiere, Roose is pleased with Ramsay’s success regarding Stannis’ forces, but it’s overshadowed by his disappointment that Ramsay let Sansa get away.
Yeah, that’s kind of the brilliance of their relationship, isn’t it? Him needing his father’s love and respect, and Roose not giving it to him, even though he does have his value and he’s proved himself on the battlefield a number of times as a very worthy and loyal ally to House Bolton.

But at the same time, his unpredictable, psychopathic tendencies tend to cause bigger problems; they certainly did with Theon, and they certainly do with Sansa. We did defeat Stannis through both of our efforts, really. But yeah, the misuse of Sansa and losing her is a huge, huge blow because she’s going to get out and the word is going to spread about what’s happened. The whole point was to make an allegiance between the Starks and the Boltons and solidify our hold in the North. That was the main plan, and it’s a great plan. It’s a plan that’s worked throughout history, really. And that’s scuppered now. They have to move very rapidly from Episode 1 to get her back. But that’s the start of it… It’s “Well done… but we’ve a bigger problem now.”

TVLINE | Do you think Roose giving Ramsay the Bolton name emboldened him? Do you think the Ramsay of a few seasons ago would’ve been able to kill his father?
Well we kind of came to a decision when we were filming it that it really was a spur-of-the-moment thing. And the information that is given is that it’s a boy that had been born. Now if it had been a girl, I may still have been alive, because his position would not be threatened. But in the moment that we find out that Walda has given birth to a boy, for me, Ramsay is no longer needed. And for him, he knows that, and he strikes quicker than I do.

There are many layers to it in that way. I don’t think he’s come in with the plan. It’s much more interesting to view it in that way… it’s just his psychotic nature that takes over. It’s not patricide, joy or thrill that “I’m head of House Bolton.” It’s a very conflicting relationship, and it’s shock that he has done it, because there is a love of his father despite their very messed-up relationship… I think that’s why it was a joy to play. It’s not just, “I’m going to kill you and I’m going to become king.” There’s a price to pay with each of those actions. There’s always a reaction to every action. 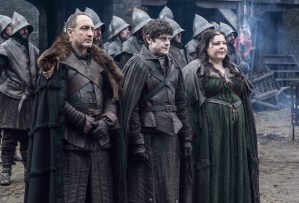 TVLINE | Ramsay’s plan to storm Castle Black is not a sound one, and he’s such a loose cannon: If Roose hadn’t died, do you think he would have eventually killed Ramsay?
Oh, definitely! In that moment that he knows that Walda has given birth to a boy, he now has a legitimate heir, and I would say he would have gotten rid of Ramsay a moment later, actually. Like Tywin Lannister, like any of the heads of any house, the primary goal of any head of house is the longevity of the house and the survival of the house and that has to be done through legitimate heirs.

TVLINE | Was Roose’s death the last scene you shot?
Yes, it was, which was good… It was a good way to go, actually. [Laughs]

TVLINE | Do you remember what was running through your mind?
I was thinking, “I can’t wait for this day to be over” because it was a really, really long day. It’s funny: It wasn’t a big emotional thing. You kind of get all that out of the way [ahead of time]. It was a fantastic five years. It wasn’t quite as emotional as I thought it would be. It was here’s another day, and it’s been fantastic. I thought, in a funny way, it would be more emotional, but it wasn’t. It was a joy to do, and a great last scene to finish off.

TVLINE | What stands out as your favorite thing to shoot?
Oh God. Going back to my very first day, I remember being so nervous. I had a scene out on this battlefield. I had this long speech, walking with Robb through this thing and I remember it being very, very daunting. I remember that very clearly. The Red Wedding was an amazing experience I’ll never forget. We rehearsed it like a play over one whole day, and then shot it over five days. We knew where we were on the stage and how the whole thing would cut together, and working with the brilliant David Nutter [who directed the episode] was fantastic. That was a great thing. I’ve had many, many great scenes with many great actors and directors. There was a great shaving scene with Ramsay and Theon in [Season] 4. That was a great scene.

What did you think of Roose’s untimely end? Tell us your thoughts in the comments!