Astute Game of Thrones fans likely picked up on the series’ sly hints that Cersei would employ wildfire against her enemies on the morning of her trial before the High Sparrow.

Miguel Sapochnik, who directed Thrones‘ epic Season 6 finale, did not.

In Sapochnik’s defense, as he tells TVLine below, he hadn’t seen the episodes leading up to the season-ender because they weren’t in final form at the time he was prepping to shoot “The Winds of Winter.”

“Blowing up the sept,” he says. “Did not see that coming or think they’d go there.”

Sapochnik, who also directed Season 5’s “The Gift” and “Hardhome” as well as the recent “Battle of the Bastards” episode, agreed to answer a few of our finale questions via email. Read on for his responses. 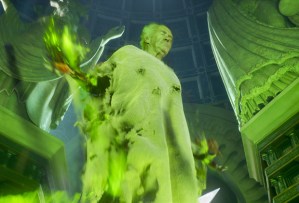 TVLINE | With so many deaths happening in the episode, not to mention the big Jon Snow reveal, talk to me about pacing and how you were able to give each beat its own moment yet still fit everything in.
Finales are a law unto themselves on this show. While most episodes have a beginning, middle and an ending, finales on Game of Thrones are just one ending after another after another as each of the storylines needs to wrapped up or at least attended to in some way. I had been told this prior to getting into the edit, but I was still surprised at how complicated a task it was to find the right balance of satisfying conclusion —but not at the expense of keeping the hour entertaining and moving it along.

One thing also worth noting is that the editor (props to Tim Porter, editor of this year’s Episode 9 and 10) and I had not seen any of the previous episodes while we were cutting ours, because they were still being edited, and that really had an impact on the way were looking at “The Winds of Winter” initially. Mainly this is because we just didn’t know what had been working, what hadn’t, how the previous installments of each story had been paced, etc. So we tried a bunch of things. In one version, we cut everything to the bone, speeding through the episode to fit it all in in under 60 minutes. In the end however, we realized that as a finale, it had its own unique pace that really stems from the writing, and our job was to embrace that. 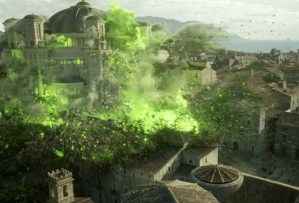 TVLINE | Which scene/sequence was the toughest to achieve in the episode?
The trial and the destruction of the sept in the opening sequence was a bit of an undertaking. Lots and lots of scenes shot over four or five months in various countries, so it took a long time before we actually even had all the pieces there to start editing.

Are you still reeling from that Thrones finale? Got thoughts on Sapochnik’s observations? Hit the coments!