Shout “King in the North!” if this sounds familiar: You had every intention of catching up on (or re-watching) Game of Thrones ahead of the HBO drama’s return this April. You know it’s the final season. You need a little brush-up on names, loves, alliances and treacheries, because it’s been almost two years since the Season 7 finale! But now we’re well into March, and by the old gods and the new, where does the time go?

Fear not. The night may be dark and full of terrors, but your Thrones Season 8 preparations don’t have to be — thanks to our ultraquick recap of each Season 7 episode. If you’re super busy, use it as your backgrounder for the start of Season 8, which takes place Sunday, April 14, at 9/8c. And if you watched last season but just can’t remember who Arya killed or to whom Jon pledged loyalty, for example, use this guide to jog your memory. And if you want more detail, no worries: Each entry contains links to the full episode recap, as well as any extras related to that installment.

Better get going — because while Bran [Spoiler alert!] may be able to see all time at once, you’ve got some catching up to do.

EPISODE 1, “DRAGONSTONE” | Arya poisons and kills every Frey responsible for the Red Wedding. Cersei sends a raven ordering Jon to pledge his fealty or face her wrath, then she rebuffs a marriage proposal from Euron Greyjoy, who offers use of his Iron Fleet. While with Thoros and Beric Dondarrion, The Hound stares into a fire and has a vision of The Wall, and a castle where “the dead are marching past.” At The Citadel, maester-in-training Sam learns that Dragonstone, the traditional seat of the Targaryens in Westeros, was built on top of a trove of dragonglass… aka one of the few materials that can kill white walkers. Also: Ser Jorah is at The Citadel, being treated for his advancing greyscale. And speaking of Dragonstone, Daenerys arrives there with Tyrion, her dragons and the rest of her advisors. Full recap here and John Bradley’s thoughts on Sam’s life at the Citadel here. 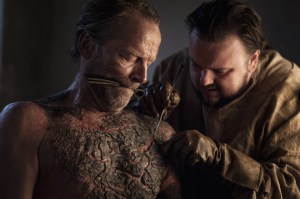 EPISODE 2, “STORMBORN” | Melisandre arrives at Dragonstone and recommends that Daenerys meet with Jon Snow, so khaleesi summons him to “bend the knee” to her. Dany also orders her forces to surround King’s Landing; the night before they leave, Grey Worm professes his love for Missandei, and they make love. Euron’s fleet attacks Yara’s. Yara, Ellaria and one of her daughters is taken hostage, the other two Sand Snakes are killed. Despite the objections of Sansa and others, Jon leaves to meet Daenerys. Sam tries a controversial greyscale treatment on Jorah. After Hot Pie informs Arya that Jon took Winterfell back from the Boltons, she has an encounter with her old direwolf, Nymeria. Full recap here and an examination of one of Melisandre’s intriguing — and possibly foreshadowing — lines here.

EPISODE 3, “THE QUEEN’S JUSTICE” | Jon and Davos arrive at Dragonstone, where they meet Tyrion, Missandei, Daenerys and her dragons. Snow doesn’t bend the knee but stresses that the Night King and white walkers present a significant threat. After Euron returns to King’s Landing, Cersei gets revenge by killing Ellaria’s daughter the same way Ellaria killed Myrcella. Daenerys’ forces take Casterly Rock, but the Lannisters take Highgarden. Jaime is tasked with killing Lady Olenna, and before the old woman succumbs to her poisoning, she instructs him to tell Cersei that she orchestrated Joffrey’s death. Bran and Meera arrive at Winterfell. Completely healed, Jorah plans to return to Daenerys’ side. Full recap here. 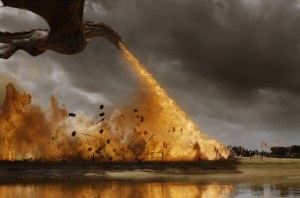 EPISODE 4, “THE SPOILS OF WAR” | Arya arrives at Winterfell, reuniting with siblings Sansa and Bran. Jon edges closer to convincing Daenerys to consider the Night King’s army her biggest threat. Theon shows up at Dragonstone on a Greyjoy ship. As the Lannister army leaves Highgarden with carriages full of Tyrell gold, Daenerys — riding a dragon — and her forces attack. The dragon lights almost everything — including Jaime, whom Bronn pushes into a lake — on fire  before it is felled by a giant crossbow that Qyburn invented. Full recap here.

EPISODE 5, “EASTWATCH” | Of Daenerys’ prisoners of war, only Randall and Dickon Tarly refuse to pledge allegiance to her, so she has Drogon roast them. Back at home, Dany happily welcomes Jorah back into her service. When the Archmaester doesn’t take seriously Bran’s raven about the white walker threat, Sam leaves The Citadel with Gilly and the baby. (Before that, though, Gilly comes across evidence that Rhaegar Targaryen had his marriage annulled. This is a big deal.) Jon, Daenerys & Co. need to rally Cersei to their side to fight the Night King, so they plan to go beyond The Wall, catch a white walker, and deliver it to King’s Landing so she can see for herself. Davos finds Gendry in King’s Landing and brings him to Dragonstone. Cersei tells Jaime she’s pregnant with his baby. Jon, Davos, Gendry, Jorah, The Hound, Thoros of Myr, Beric Dondarrion and others set off for the lands beyond The Wall. Full recap here, an explainer of what Gilly unearths at The Citadel here and a reminder of who Gendry is (and why he’s important) here. 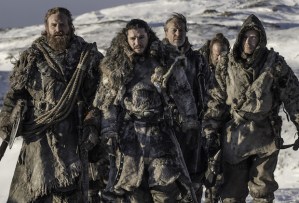 EPISODE 6, “BEYOND THE WALL” | Beyond The Wall, Jon’s group manages to catch a wight, but then they’re besieged by an army of the undead. They carve out a refuge from the fighting, but Thoros of Myr succumbs to his wounds and freezes to death. At Winterfell, Sansa discovers Arya’s bag of faces. Tyrion tells Daenerys that Jon is smitten with her, but she says he’s not her type. After Gendry sends a raven alerting Daenerys to the white walker attack, she and her dragons fly to save Jon’s group. During the rescue, though, the Night King strikes Viserion and he dies. Jon winds up wielding Longclaw against an advancing undead horde, but is saved by his Uncle Benjen, who appears out of nowhere and stands against the masses so Jon can get away. Later, Daenerys says she fully believes in the threat of the Night King, and Jon pledges his loyalty to her, calling her “my queen.” Elsewhere, the Night King’s minions pull Viserion’s corpse from the lake and we see that the beast is now a white walker-ified dragon. Full recap here and a more in-depth look at the mysterious Benjen Stark here. 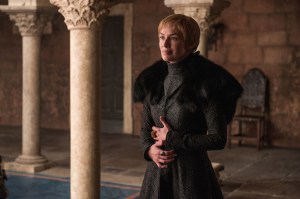 EPISODE 7, “THE DRAGON AND THE WOLF” | Daenerys, Jon, Tyrion and their crew sail to King’s Landing for a summit with Cersei, Jaime and their team at a place called Dragonpit. Cersei isn’t inclined to agree to a truce, but seeing the wight (and how difficult it is to kill) definitely makes an impression: She eventually says her armies will join the fight against the Night King’s forces. Tyrion realizes his sister is pregnant. Later, Cersei tells Jaime she was lying: She’s not planning to send her men north, and Euron is going to fetch The Golden Company mercenaries from Essos in order to bolster her ranks. Disgusted, Jaime leaves to join Jon and Daenerys’ side. At Winterfell, Littlefinger tries to convince Sansa that Arya is planning to kill her in order to become Lady of Winterfell, but she realizes that he’s the one plotting for power. This, along with his many other crimes over the years, earns him a death sentence; Arya does the deed. Via Bran’s all-seeing powers (and some prompting from Sam), we learn that Jon is Rhaegar Targaryen’s legitimate son, Aegon, and he’s heir to the Iron Throne. On their boat north, Jon and Daenerys have sex. Bran has a vision of The Wall falling to the Night King’s army. Full recap here and a sincere (no, really!) appreciation of Littlefinger here.