Need to catch up? Check out our previous Game of Thrones recap.

There’s a storm a-brewin’ on Game of Thrones, with Daenerys Stormborn plotting her quest for world domination… but is her ship sunk already?

Read on for the highlights of “Stormborn”:

DRAGONSTONE | Amid a massive downpour, Daenerys lays out her gameplan with the help of Tyrion and Varys, who assures her that Cersei’s pretty well hated throughout Westeros. Daenerys questions his loyalties, though, since Varys quickly turned on her father to support Robert Baratheon: “What kind of a servant is that?” Varys defends himself, claiming he’s on the side of the people, but she warns him: “If you ever betray me… I’ll burn you alive.” (Fair enough.)

Then Daenerys receives a surprise visitor: It’s Melisandre! The Red Woman doesn’t want to make any more prophecies, but she tells the Mother of Dragons “I believe you have a role to play… as does another.” Yep, she means Jon Snow, who Melisandre says has united the houses in the North. She advises Daenerys to take a meeting with him, and Tyrion agrees, thinking he’ll make a “valuable ally”: “Jon Snow has more reason to hate Cersei than you do.” Daenerys agrees to invite Jon to Dragonstone, but as his “Queen” to “bend the knee.” (He’s getting a lot of those bent-knee commands lately, isn’t he?)

VIDEOS Game of Thrones Stars Pick Their Favorite Scenes to Film So Far, From Big Battles to Bathtubs 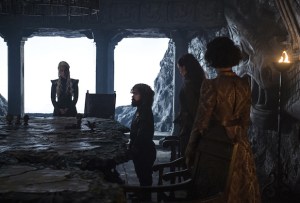 Yara and Ellaria Sand, along with Lady Olenna, push Daenerys for immediate action, but Daenerys has a more indirect plan of attack: surround the city of King’s Landing, cutting off Cersei’s troops from food and supplies. Tyrion lays out the plan, with Grey Worm and the Unsullied attacking Casterly Rock, and the ladies fall in line, but Olenna later warns Daenerys not to be a “sheep” in trusting Tyrion. And in case you were missing the nudity so far this season: Missandei visits Grey Worm before he heads off to war, wishing him “good fortune.” He professes his love to her, calling her his “weakness,” saying he’s never feared anything before… but now he fears losing her. Cue the steamy pre-war lovemaking session!

We almost see some more action between Yara and Ellaria, with the latter promising a “foreign invasion” (!), but they’re interrupted when their boats comes under fire. It’s Euron’s fleet, with his ship ramming right into Yara’s, setting off a gory hand-to-hand battle. It’s a valiant fight, but two of the Sand Snakes are murdered, with a third and Ellaria taken hostage. Yara and Euron face off in mortal combat, and he eventually gets the better of her, holding a blade to her throat and beckoning Theon, aka the “cockless coward,” to come and save her. But Theon just goes into catatonic Reek mode and jumps overboard. He’s left to float alone in the sea, surveying the flaming carcasses of his once-mighty fleet. 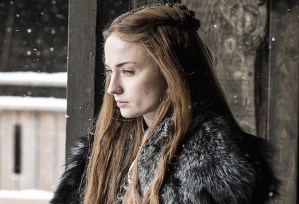 WINTERFELL | Jon gets the raven from Daenerys, written by Tyrion. Sansa thinks it’s a trap, but Davos thinks they might need her dragons’ fire to melt the White Walkers. And the ravens are really racking up the frequent-flyer miles this week, because Jon also gets that note from Sam telling him about the mountain of dragonglass sitting underneath Dragonstone.

Jon tells his troops what he’s learned — he said the name “Daenerys” aloud, guys! — but he faces a revolt when he suggests teaming with a Targaryen to defeat the Night King. Sansa voices her concerns again, and Lord Yohn Royce insists “a Targaryen cannot be trusted.” Even Lyanna Mormont wants the King in the North to remain in the north. But Jon says part of being king means protecting his land from enemies, and that means making allies. He leaves Sansa in charge before heading off to meet Daenerys. 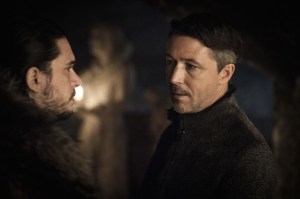 Littlefinger likes that decision, to be sure, and he pulls Jon aside later, trying to win favor with the new king. But when he suggests Jon would be dead if it weren’t for him and adds, “I love Sansa, as I loved her mother,” that doesn’t sit well: Jon strangles him, warning him, “Touch my sister, and I’ll kill you myself.” (Is anyone keeping track of all the death threats this week?)

THE CITADEL | Archmaester Marwyn examines Jorah, whose greyscale is spreading all over his body like poison ivy. He could live another ten years like this, Marwyn says, but his mind will be gone in six months. Sam suggests he could be cured the way Shireen was, but Marwyn insists it’s too far advanced. He gives Jorah a day before he ships him off to live his final days with the Stone Men. 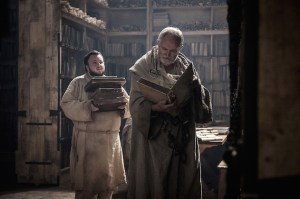 Sam says he may have found a greyscale cure in a book he read, but Marwyn tells him the book’s author died… yep, of greyscale. But Sam persists, secretly rolling a cart of medical herbs and pastes into Jorah’s cell. He offers the knight a swig of rum and a strap to bite down on before agonizingly slicing off the grey scales, one by one. (Never thought we’d say this, but: Can we go back to the bedpans?)

KING’S LANDING | Cersei’s found a new possible ally in her war against “The Mad King’s daughter”: Sam’s dickish dad Randyll Tarly! Cersei spins tales of Daenerys feeding noblemen to her dragons in Essos to win the allegiance of Randyll and the Lords of the Reach. Randyll’s a little concerned, understandably, about the three full-grown dragons, but Qyburn assures him: “We are currently at work on a solution, my lord.” And Jaime dangles the title of Warden of the South in front of Randyll’s nose to seal the deal.

So what’s this “solution,” you ask? Qyburn takes Cersei down into the bowels of King’s Landing to see a massive dragon’s skull: “If they can be wounded, they can be killed.” He unveils a massive crossbow that, when triggered, can fire a massive spear through a dragon’s eye. 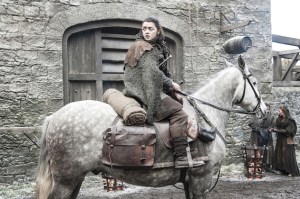 ARYA ON THE ROAD | In a roadside pub, Arya runs into her old pal Hot Pie, who’s a little stunned by how, um, mature she seems. (She doesn’t look like a boy anymore!) She swigs some ale and announces her plans to go to King’s Landing to pay Cersei a visit… until Hot Pie tells her Jon Snow took Winterfell back from the Boltons. A change of plans (and a family reunion), perhaps?

Later, alone in the woods with her horse, Arya hears a noise and grabs her sword. Suddenly, she’s surrounded by a fierce pack of wolves, all baring their teeth… including one supersized direwolf. Arya is stunned: “Nymeria?” She lays down her sword and asks the wolf to come with her to Winterfell for the Stark reunion. But the direwolf just walks away, along with the other wolves. Hmmm… has this wolf been too wild, for too long, to ever be tamed?

Got thoughts on tonight’s Game of Thrones? Drop ’em in a comment below.

Ready for the next episode? Read the Game of Thrones Season 7, Episode 3 recap here!