Need to catch up? Check out our ultraquick Game of Thrones Season 6 recap here.

Daenerys Stormborn of the House Targaryen, First of Her Name, the Unburnt, Queen of the Andals and the First Men, Khaleesi of the Great Grass Sea, Breaker of Chains and Mother of Dragons has a new clause to add to her official title: Mistress of Dragonstone (And Don’t You Forget It).

If there’s a more glorious sight on TV this week than Game of Thrones‘ khaleesi arriving at her family’s rightful home in Westeros, I haven’t seen it. And yes, I’m including Arya’s cold-open Frey massacre in the rundown — though that was pretty baller, too.

And then we had Cersei with her tantalizing potential alliance with a Greyjoy, and Jon and Sansa clashing over leading the North, and a white walker Wun Wun?! All in all, Thrones‘ long-awaited return didn’t disappoint. And the war? It, like the previously traveling winter, is coming.

Read on for the highlights of “Dragonstone.”

HOUSE STARK: ARYA-DON’T-PLAY EDITION | Even before the credits, we kick off the episode with a startling visual: Walder Frey, who’s presiding over a banquet hall full of his family members. Wait, what? Didn’t he get the sharp end of Arya’s knife last season? When the old man calls for a toast, everyone drinks — except him — and he congratulates them for being the men who perpetrated the Red Wedding. But “You didn’t slaughter every one of the Starks,” Walder informs them as they start to choke on what is clearly poisoned wine. “Leave one wolf alive, and the sheep are never safe.” Turns out, Walder is really Arya in disguise! Once everyone keels over and dies, Arya leaves, stopping to advise a servant girl: “Tell them winter came for House Frey.” Call that girl Emily Thorne, because she just got revenge.

Later, Arya comes across a gaggle of soldiers camping and having a merry time in the woods. (The show sure didn’t waste any time with that Ed Sheeran cameo, did it?) They gladly feed her and ask where she’s headed. “I’m going to kill the queen,” she says, and the guys think it’s a joke. It most definitely is not. 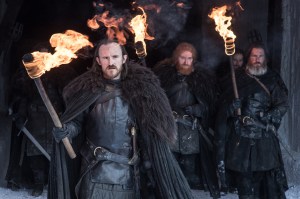 HOUSE STARK: A-LITTLE-FARTHER-NORTH EDITION | After Bran has another horrifying vision — this time of an army of white walkers, including the reanimated giant Wun Wun, marching — he and Meera finally make it to The Wall… where Dolorous Edd doesn’t believe that Bran is really Jon’s brother. But he lets the pair in once Bran remarks that he knows Edd fought at Hardhome with Jon.

Meanwhile, Jon has a two-point agenda in warding off the approaching threat: 1) find more dragonglass, 2) have women fight alongside men. (When some dude tries to challenge that last one, little Lyanna Mormont shuts him down. “I don’t plan on knitting by the fire while men fight for me,” she says. God, I love her.) Later, Jon and Sansa disagree about how they should handle the matter of families like House Karstark and House Umber, which used to be loyal to the Starks but which ditched and eventually supported the Boltons. She wants them to pay for their disloyalty and definitely doesn’t think they should get a castle. He doesn’t want to punish them — and he doesn’t like the fact that Sansa undermined his authority in front of everyone. Later, she urges him to be smarter than their brother and their father — both dead— were. “I loved them. I miss them. But they both made stupid mistakes and lost their heads for it,” she says. But all of that gets put on the backburner when a raven from King’s Landing arrives: Cersei wants Jon to travel there and kneel before her, or otherwise face her wrath.

“You almost sound as though you admire her,” Jon says, which is a very interesting observation, no? Sansa merely replies that she learned a great deal from Joffrey’s ruthless mama. 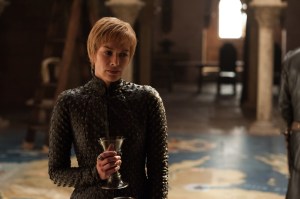 HOUSE LANNISTER | In the map room in King’s Landing, Cersei wonders if Jaime is afraid of her. “Should I be?” he asks, which isn’t really an answer, so I’ll go ahead and say, “Yes.” She doesn’t want to talk about Tommen’s leap out of the window — basically, he was dead to her the moment he betrayed her for the High Sparrow’s carnival show — but she does want to discuss their need for allies to build a dynasty. First item on the agenda? Euron Greyjoy is on his way over for a little look-see.

Yara and Theon’s uncle shows up with a new ‘do and a desire to get back at his niece and nephew for running away with his ships. “Murdering them would make me feel a lot better,” he explains. There’s some Jamie-Euron back and forth, but what you need to know about this exchange is that Euron really wants to marry Cersei; in exchange, she’ll get use of his Iron Fleet. She doesn’t trust him and so turns down his offer, but he promises to return with a “precious gift” that will prove his worth.

HOUSE CLEGANE | The Hound, Thoros and Beric take shelter at an abandoned house during a snowstorm, and The Hound is hesitant to enter: It’s the house belonging to the dad and daughter that fed him and Arya a while back. (You remember? As thanks, The Hound beat down the father and left him for dead, then stole from them.) They’re both dead now, and from the position of the skeletons in the corner, it appears that the father killed the girl then himself rather than have them both starve to death. For what it’s worth, The Hound seems properly chagrined.

After building a fire, the two men discuss fate and such — Beric has no idea why the Lord of Light keeps bringing him back — but he invites The Hound to stare into the flames and see what he sees. And, surprise: The Hound sees something! The Wall, and a castle near the sea where “the dead are marching past.” Later that night, Thoros wakes up to find The Hound digging a grave for the skeletons. Did he know them? Thoros asks. “Not really,” The Hound replies.

THE CITADEL | Sam’s doing grunt work at the Citadel (that montage with the gruel, poo and dry-heaving was both hilarious and so, so gross) when he sees a book he wants to read, but it’s locked away behind bars — and the Archmaester says the younger man can’t access restricted books until he’s a maester himself. The Archmaester is also one of the only people there who believe Sam’s claim that white walkers exist, but he doesn’t think it’s all that troubling, because, “Every winter that ever came has ended.” I love that Old Sam would likely have accepted this… but New Sam steals some keys and liberates a couple of the special books so he can evaluate them for himself.

And guess what he learns? Dragonstone, aka the traditional seat of the Targaryens in Westeros, was built on top of a buttload of dragonglass. So Sam sends a raven to his pal Jon ASAP.

One more thing: Ser Jorah is at the Citadel, and his arm is fully greyscaled. “Has she come yet?” he begs of Sam. “The Dragon Queen?”

HOUSE TARGARYEN | Speak of the Daenerys! The girl we saw stripped physically and emotionally bare when this whole shebang started? Yeah, she’s a woman now, and she’s home. We watch as khaleesi and her troops land at Dragonstone and survey the castle; eventually, she and Tyrion wind up in the map room. “Shall we begin?” the queen asks her hand. Hell YES.

Now it’s your turn. What did you think of the premiere? Grade the episode via the poll below, then hit the comments with your Thrones-related thoughts!

Ready for the next episode? Read the Game of Thrones Season 7, Episode 2 recap here!