Need to catch up? Check out the previous Game of Thrones recap here.

Jon Snow King in the North and Daenerys Stormborn of the House Targaryen First of Her etc. finally breathe the same air in this week’s Game of Thrones, and I’m guessing Jon wishes he brought all of his northern furs, because brrrrr it is CHILLY in that Dragonstone throne room. (At least, at first.)

But the best moment of the episode, in my view, happens at the very end, as Lady Olenna proves she’s the HBIC 4eva.

Read on for the highlights of “The Queen’s Justice.”

HOUSE TARGARYEN | (I’m using this subhead, by the way, because it’s literally Daenerys’ house we’re in for most of the episode.) Jon, Davos and his men meet Tyrion, Missandei and some Dothraki on the shores of Dragonstone.”It’s been a long road, but we’re both still here,” Tyrion notes after the men greet each other fondly. Then Missandei asks everyone to hand over their weapons, and they do.

On the long walk to the castle, Tyrion and Jon catch up, starting when Tyrion asks after Sansa: “Does she miss me terribly?” Off of Jon’s look, the Hand of the Queen continues, “A sham marriage, and unconsummated,” then advises his old acquaintance that the redhead is “much smarter than she lets on.” Jon replies:”She’s starting to let on.” Then a giant dragon swoops down, and I believe the term I’m looking for is… shook? Yeah, Jon is well and truly shook by seeing the beast (and its siblings) circling Dragonstone.

Finally, Jon and Daenerys are in the same room. After Missandei reels off khaleesi’s long list of titles, Davos simply says, “This is Jon Snow… King in the North.” (Ha!) Dany wastes no time in reminding Jon that the last King in the North bent the knee to a Targaryen “in perpetuity,” but Jon says he’s not planning to follow suit. “You have traveled all this way to break faith with House Targaryen?” she wonders, and when he brings up the Mad King’s terrible acts, she apologizes and asks him “not to judge a daughter by the sins of her father.”

If he bends the knee, she continues, she’ll name him Warden of the North. “Together,” she promises, “we will save this country from those who would destroy it.” But he says just as she’s not guilty of Aerys’ crimes, “I am not beholden to my ancestor’s vows.” Zing! She’s like, dragons! Dothraki! But Jon says she needs his help as much as he needs hers, educating her about “the enemy to the north.”

“I am not your enemy. The dead are your enemy,” Jon says, and the Mother of Dragons is really, really unimpressed and a little irked by what she perceives as his impertinence. He tosses out the terms “Night King” and “white walkers” but she is unmoved. “I spent my life in foreign lands. So many men have tried to kill me, I don’t remember all of their names,” she says, adding that all of her years of torment were endurable because she had faith “in myself… I was born to rule the seven kingdoms, and I will.”

Jon scoffs. “You’ll be ruling over a graveyard if we don’t defeat the night king.”

Davos steps in to sing Jon’s leadership praises, and when the Onion Knight gets a little carried away, he mentions that “he took a knife in the heart” for the people he was championing. Everyone notices, but no one says anything. Then Tyrion puts this out there: If nothing they do matters in light of the frozen dead threat, why not just bend the knee? Jon basically replies that he has no idea who Daenerys is or what she’s all about, so he’s not likely to pledge fealty.

She coolly counters that, as King in the North, he’s usurping power from her. “You are an open rebellion,” she notes, and when Jon asks if he’s her prisoner, she answers, “Not yet.” Daenerys quickly dismisses the men after Varys enters and whispers something in her ear; we later find out that he’s had news of Euron’s attack on the destroyed Greyjoy fleet.

Later, Tyrion advises Jon to use his time at Dragonstone to learn more about Daenerys: “She protects people from monsters, just as you do.” Then he adds that he can help, if Jon has the appropriate ask. Next thing we know, Tyrion is talking to an incredulous khaleesi about dragonglass. But the Hand points out that Jon shouldn’t be there — it’s a politically bad idea — but he is, nevertheless. Plus, Dany didn’t even know the dragonglass was there! Oh, and that part about Jon’s heart and the knife? She picked up on it. 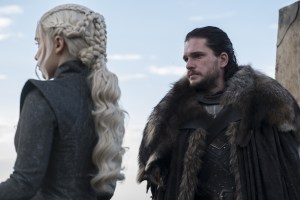 Jon and the queen later have some diplomatic alone time where they each soften their position a bit. “Perhaps we should all be examining what we think we know,” she says, giving him permission and help to mine the dragonglass. “So you believe me then, about the Night King and the army of the dead?” he asks. “You better get to work, Jon Snow,” she says, staring into the distance.

Also of importance: Varys wonders why Melisandre is “hiding on the cliff” while Jon arrives. She’s all, my part’s done, dude! But he doesn’t believe it, and when pressed, she vaguely alludes to the “terrible mistakes I’ve made” that make her persona non grata with Jon and his crew, namely Davos. She says she’ll flee to Volantis, but she’ll return. “I have to die in this strange country, just like you.” Interesting. 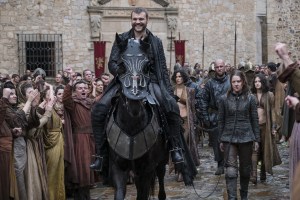 HOUSE LANNISTER | Back in King’s Landing, Yara’s uncle marches her, Ellaria and the surviving Sand Snake through King’s Landing to the happy cheers of the crowd. The victor brings them to Cersei, who says he can have what he wants (her)… but only when the war is won. Jaime looks on, mildly disgusted, reminding Euron that the approving masses would be just as happy to see his head on a pike. “Or yours,” Euron replies. “They just like severed heads, really.” (Ha! And true!) Then Euron asks Jaime about his twin sister’s sexual preferences; there’s a bit about a finger that made me laugh, because I am 5 years old.

Down in the dungeon, Cersei taunts Oberyn’s lady by recounting the Red Viper’s eye-popping death, then musing about how much she loved Myrcella and how, exactly, she’d murder Ellaria’s daughter. But wait, she just did it! With a poisoned kiss, Cersei kisses the Sand Snake — honestly, no clue which one this is — and then quaffs an antidote Qyburn hands her, while Ellaria and her kid sob as they realize what’s just happened.

High on murder and torment, Cersei finds Jaime and they do their thing, even though he says “No” at first. In the morning, when news of a visitor from Braavos arrives via servant, Jaime is shocked that his sister brazenly opens the door, effectively outing them as a couple… if there was anyone left in King’s Landing who doesn’t know, that is.

Cersei meets with the representative from the Iron Bank, an institution her family owes a lot of money. She shrewdly points out the reasons the bank should not back Daenerys in the war for the throne, then says, “”Lannisters always pay their debts. Do former slaves? Or Dothraki? Or dragons?” Give her two weeks, she adds, and “my debt will be paid in full.”

Much later, we watch Daenerys’ Unsullied storm Casterly Rock, and the Lannister army is more than ready for them. But Tyrion was in charge of building the sewer system on “the rock” — he used to use them to bring prostitutes in and out of the building —  which means he knows the only way to get into the “impregnable fortress.” And because the Unsullied are fighting out of love for Dany — unlike the Lannister forces, who fight out of fear of Cersei — they triumph. And, indeed, when Grey Worm (phew!) takes off his helmet, it seems like the dragon queen has won… until he realizes that there should be a LOT more soldiers around. 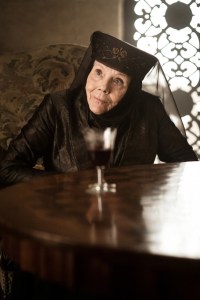 HOUSE TYRELL | Where are the Lannisters? They’re marching on Highgarden, home of Lady Olenna. She literally sees them coming from a mile away, and when Jaime finds her in her chambers after his soldiers kill all of hers, they share a drink as he notes he used the exact same military strategy Robb Stark used against him at Whispering Wood. Joffrey’s name comes up, and while I can’t print what Grandma Tyrell calls that little jerk, I highly co-sign it. They also talk Cersei. “You love her… you poor fool. She’ll be the end of you,” the old lady says. “She’s a disease. I regret my role in spreading it. You will, too.”

Anywhoo, then it’s time to kill Lady Olenna. He poisons her drink and pushes it close, promising her a pain-free death, and she quaffs the entire thing. Before she goes down, because she’s amazing, she says she’s glad she won’t exit the world in the “f–king scene” that was Joffrey’s death. “Not at all what I intended… Tell Cersei. I want her to know it was me.” And that, friends, is what we call CLOSURE.

HOUSE STARK | At Winterfell, Sansa is an able castle boss while Littlefinger slinks around in her wake. Oh, and at one point, he basically offers up his life’s credo: “Everyone is your enemy, everyone is your friend. Every possible series of events is happening, all at once. Live that way, and nothing will surprise you. Everything that happens will be something that you’ve seen before.” Well, OK then!

They’re interrupted by arrivals at the gate: It’s Bran! And Meera! “Hello, Sansa,” he says calmly before a crying Sansa embraces him. In the weirwood, they both lament that Jon isn’t there, then she points out that he’s the true lord of Winterfell. Nope, he says: “I’m the three-eyed raven” who can see everything that’s happening/happened all the time, but he needs a little more schooling in how to do it. “I’m sorry for all that’s happened to you. I’m sorry it had to happen here, in our home,” he says, all zen AF while he freaks her out by complimenting her on how she looked at her wedding to Ramsay Bolton… which he wasn’t at.

THE CITADEL | “The infection no longer appears to be active,” the archmaester says as he examines a completely healed (!) though scarred Jorah, who swears that he “just started feeling better” thanks to rest and the climate. Sam is 100 percent in a heap of trouble later, but it’s kind of worth it to hear Jorah say that now that he’s got a future, he’s heading back to his khaleesi’s side. “The only place for me is back with her,” he adds, thanking Sam for giving him a second chance.

Later, the archmaester reminds Sam that he was specifically forbidden to treat Ser Jorah… but then changes his tone and notes that the procedure is insanely difficult, yet Sam was successful. “I read the books and followed the instructions,” he says, earning the praise: “That man is alive because of you. You should be proud.”

His reward? “Not being immediately expelled from the Citadel,” the older man says, giving Sam an insane amount of book-copying to do as penance.

Ready for the next episode? Read the Game of Thrones Season 7, Episode 4 recap here.