Need to catch up? Check out the previous Game of Thrones recap here.

Before this season of Game of Thrones began, I predicted that the remaining Stark children would never be in the same place at the same time ever again. Because that would be too happy of a moment for a family plagued by heartache and supremely bad timing.

And while that still isn’t the case in this week’s episode, we do get Arya, Sansa and Bran together at Winterfell, a reunion that is as hard to watch (given how much the kids have changed since they last knew each other well) as it was eagerly awaited: Man, life in Westeros has messed these kids up beyond repair, hasn’t it?

And yes, before you hit caps lock and fill the comments, I’m aware Jon isn’t really a child of Ned Stark’s. But he was raised as one, and  misery makes a family.

Don’t worry, I’m not ignoring the insane battle that takes place in the back half of the episode — I’m merely trying to catch my breath after it. So. Much. Fire! Read on for the highlights of “The Spoils of War.”

HOUSE LANNISTER | Jaime is still smarting from Lady Olenna’s parting words, which Bronn notices as the Kingslayer loads up the Tyrell gold and sends it off to King’s Landing to be paid to the Iron Bank. Though he’s been given sizable payment, not to mention his title, the sellsword isn’t pleased that he still doesn’t have a castle.

“We pay our debts,” Jaime reminds his sidekick. “Right,” Bronn says. “Just not to me.”

HOUSE STARK | Littlefinger, as forecasted, indeed hands Bran the dagger that was meant to kill him. The older man does more of that creepy “anything I can do for you… you need only ask” thing that he does. Bran asks whether Baelish knows who the weapon belongs to, and he says no — but that the knife is responsible for Bran’s current path. “I imagine you’ve seen things most men wouldn’t believe,” he says, noting that the kid has been privy to “all the chaos in the world.” “Chaos is a ladder,” the teen replies, citing Littlefinger’s own words from a while back, and it spooks Baelish so much, he makes a quick exit.

Meera tells Bran she needs to be with her family when ish gets real, plus, “You don’t need me anymore.” He’s super cold, has to be prodded to say thank you, and she tearfully reminds him that her brother, Hodor and a bunch of other people died for him, so the least he could be is grateful. He deadpans that he’s not really Bran anymore, because he’s got all the knowledge of all time scurrying around in his brain or something. “You died in that cave,” she says, leaving him alone to ponder all of humanity (or whatever pervy thing Littlefinger last thought about Sansa). 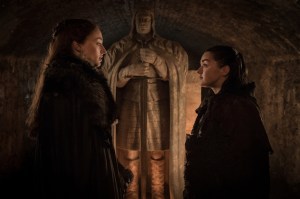 Wait, someone’s at the front door! “I’m Arya Stark. This is my home,” young Arya tells the idiot guards at the gate, who repeatedly tell her to eff off before her tone of voice makes them allow her into the courtyard. While the guards are arguing about who will tell Sansa, Arya takes off. And after their report, Sansa knows her sister is home. She finds her in the crypts, and their reunion is… not the warm one we witnessed between Jon and Sansa. Speaking of, “When he sees you, his heart will probably stop,” Sansa says of their older brother, but the conversation is a little stilted. They briefly lament that Ned’s sculpture doesn’t look like him and that neither of them killed Joffrey, then they share a chuckle over the fact that Arya has a kill list, then they go see Bran in the weirwood.

Arya hugs her brother, who tells her he saw her at the crossroads: “I see quite a lot now.” He mentions that he thought Arya would to go King’s Landing — “Cersei’s on her list of names” — then whips out the dagger Littlefinger gave him. “Why would a cutthroat have a Valyrian steel dagger?” Arya wonders, but Bran doesn’t really care. He gives her the blade, because “It’s wasted on a cripple.”

In the courtyard, Pod congratulates Brienne on keeping her vow to Catelyn Stark. “I did next to nothing,” she quickly corrects him. But when he says she’s too hard on herself, she quietly thanks him. Aw, guys! Later, Arya asks Brienne to train with her. “Move aside, Podrick,” the knight says. Then the two women have an amazing play-swordfight, during which Brienne gets schooled by someone literally a third of her size. They’re both glowing afterward. “Who taught you how to do that?” Brienne asks. “No one,” Arya answers. I see what you did there, Game of Thrones.

HOUSE TARGARYEN | Daenerys hasn’t heard from the Unsullied, but she promises Missandei that Grey Worm will come back to her. Dany’s ability to multitask is highlighted as she presses her counselor for dirty details about her night with the warrior, but all Missandei will say is that “many things” happened. Mmm-hmm, and I’d be willing to bet many things happened many times, if you catch my drift. 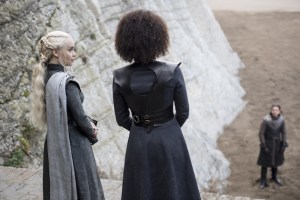 Their girl talk is interrupted by Jon, who brings Daenerys underneath the castle to show them the massive stores of dragonsglass. He also points out some cave drawings made by children of the forest: The murals depict the children of the forest and the first men fighting against “their common enemy” — white walkers. He points out that the groups fought together because they couldn’t survive otherwise. “The enemy is real. It’s always been real,” he adds.

She’s very clearly affected by the whole shebang. “I will fight for you. I will fight for the North… when you bend the knee.” He counters that his people won’t accept a southern leader, but she states, “They will if their king does… isn’t their survival more important than your pride?”

They exit the cave to find Tyrion and Varys with grim faces: Daenerys’ army took Casterly Rock, but then there’s the Highgarden defeat. Tyrion presses her to commit to the blockade of King’s Landing, but she lashes out that maybe he doesn’t want to hurt the Lannisters — who are his family, after all — after all. She wants to ride a dragon to the Red Keep and barbecue everyone, even though Tyrion steadfastly maintains that that is a terrible plan. Jon agrees: “If you use [the dragons] to melt castles and burn cities, you’re not different. You’re just more of the same.”

Later, Davos and Jon ask Missandei if she’s truly free, given that she’s now serving khaleesi. “She’s the queen we chose,” the interpreter corrects him. “Will you forgive me if I switch sides?” Davos says to the King in the North. (Ha!) But enough inspirational levity: Theon has arrived on a Greyjoy ship.

He quickly asks Jon about Sansa’s welfare. “What you did for her is the only reason I’m not killing you,” Jon tells him angrily.

THE BATTLE | As the Lannister army leaves Highgarden, it sounds like thunder is following them — until it becomes clear that the sound is thousands of Dothraki riders advancing upon the freaked-out army. (Wow, that visual of them coming over the rise is insane, and the arrival of Daenerys on a dragon only sweetens it.) “Dracarys,” she calls out, and the creatures flambés a giant swath of the Lannister forces. Then the Dothraki ride in for some bloody hand-to-hand (or hand-to-horse) combat. 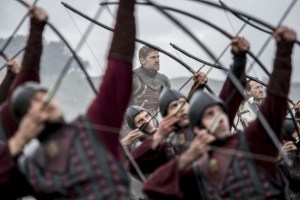 There’s a lot of fire, ash, fire, detailed death, fire, crawling people on fire and more fire (oh, and excellent cinematography), then the Lannister forces finally whip out that giant crossbow that Qyburn had been working on. Bronn shoots it at Daenerys’s ride and eventually hits him; the beast starts to plummet while the Mother of Dragons holds on tight. When the beast eventually lands, in pain, Dany is too busy trying to remove the giant arrow to notice that Jaime is riding straight at her. “You idiot,” Tyrion says, so sadly, watching from a distance. “You f—king idiot.”

But when the dragon sees Ol’ Goldhand and breathes a wall of flame at him, it looks like it’s lights out for Cersei’s love. JUST IN TIME THO, Bronn dives at his pal and they both fall into a nearby lake, saving (?) Jaime’s life. Though as he sinks downward in his heavy armor, maybe not so thorough of a job?

Ready for the next episode? Read the Game of Thrones Season 7, Episode 5 recap here.