It would probably be a stretch to call Petyr “Littlefinger” Baelish a beloved Game of Thrones character. Not too many tears were shed in Westeros this week when Sansa sentenced the master manipulator to death, with Arya carrying out the sentence herself by brutally slicing his throat. But we have to admit: We’re going to miss the old rascal. Across seven seasons, Littlefinger proved himself to be a low-down, dirty snake who was all too happy to double-cross those who trusted him if it benefited him to do so… and we loved him for it. 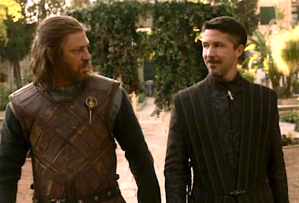 First of all, no one can question Littlefinger’s intelligence. In terms of pure brainpower, Tyrion and Varys are the only GoT characters who could rival him. While the rest of Westeros ran around making decisions based on stubborn loyalty (the Starks), sadistic cruelty (Joffrey) or plain old stupidity (Jon Snow), the coolheaded Littlefinger always planned his attacks a dozen moves in advance. And as the Iron Throne changed hands again and again, he knew how to stay above the fray and take advantage of the turmoil raging all around him. He famously told Varys in Season 3 that “chaos is a ladder”… and man, did he ever climb that thing.

We first met Littlefinger, played with icy precision by Aidan Gillen, back in Season 1 as the proprietor of a King’s Landing brothel. (He was a small-business owner!) Yes, he did some morally questionable — OK, reprehensible — things while in charge there, but he also used his brothels to spy on clients and extract valuable information. He quickly established himself as a man who knows things — the kind of guy you go to when you need something unsavory done, and done discreetly. And throughout the series, he was always lurking in the shadows, whispering into the ears of the rich and the powerful, using his silver tongue and sly cunning to pull the strings behind the scenes.

Littlefinger’s ability to sense the changing winds and shift allegiances as needed kept him alive much longer than he had any right to expect, given how frequently those around him bit the dust. He managed to align himself, at various points, with both the Lannisters and the Starks — a near-impossible tightrope to walk. And sometimes his self-serving schemes happened to work out in our favor: We’re eternally grateful to him for his role in poisoning that jerk King Joffrey, and in saving Jon Snow’s bacon at the Battle of the Bastards. Sure, his dumping of wife Lysa Tully by hurling her through that Moon Door was a bit coldhearted… but what a visual! 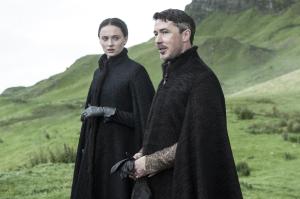 Every great man has a fatal weakness, though, and Littlefinger’s was obvious: Stark women. He was obsessed with Ned’s wife Catelyn from childhood on, and then transferred that obsession to her young daughter Sansa after Catelyn’s death. Littlefinger’s creepy desire to make Sansa his queen definitely clouded his judgment… and eventually doomed his quest for ultimate power.

And so Game of Thrones‘ grandmaster finally ran out of chess moves this week: He painted himself into a corner with Sansa, who started to realize what a snake he is, and ended up getting checkmated by Arya’s white-hot rage after he tried to drive a wedge between the Stark sisters. (And he wasn’t even on Arya’s kill list!) He scrambled to defend himself, and even begged for his life in pitiful fashion, but it wasn’t enough. Ah, well. We’re not saying Littlefinger didn’t deserve to die — he did, a thousand times over — but we’ll miss the clever bastard just the same.

Admit it: A little part of you will miss Littlefinger, too, right? Eulogize the master manipulator of Westeros in the comments.