So maybe life at the Citadel isn’t all it’s cracked up to be, eh, Sam?

Sunday’s Game of Thrones premiere served as a rude awakening for Jon Snow’s loyal friend Samwell Tarly (John Bradley), who found himself stuck in a mind-numbing routine of reshelving books and scrubbing out bedpans as a lowly apprentice in Westeros’ great hall of learning. But Bradley tells TVLine that Sam doesn’t mind paying his dues.

“He’s not gone to the Citadel for an easy life for himself,” Bradley says. “When he appealed to Jon Snow, he said, ‘Send me to the Citadel because that’s where I can do the most good… I will help you win this war.’ He wants to go to the Citadel and work, and find knowledge that he can apply that’s going to change the course of things for everybody.”

Sam hit a roadblock, though, when the books he needed to help Jon were kept in a restricted area reserved for maesters. That exposed a rift between Sam and the maesters, Bradley says: “People at the Citadel are very keen on academia and knowledge for the sake of it. They’re quite keen to store all this knowledge and leave it on the shelf for a long time and never apply it. Sam doesn’t believe in that relationship with knowledge. He knows that knowledge isn’t powerful if it’s on the shelf… and not being applied.” (Maybe that’s why Sam later took those books off the shelves and snuck them away to read later.) 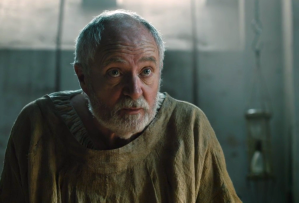 The Season 7 premiere also introduced us to Archmaester Marwyn, played by Harry Potter alum Jim Broadbent, who dismissed Sam’s worries about a White Walker invasion. (“Every winter that ever came has ended,” he said.) Bradley admits to being awestruck at first when working with the veteran actor: “You think you’ve done this job for a while, and you know the way it works. And you think, ‘Well, I know he’s going to be good, but… I may not be blown away by his first take.’ First take, I was blown away by.”

So how do Sam and Marwyn get along this season? “He’s a fatherly figure,” Bradley hints. “He’s a very wise old soul that Sam develops this relationship with.” Well, we’ll see how “fatherly” the Archmaester is feeling towards Sam after he finds out about those books he stole…

Will Sam face dire consequences for his book theft? And what’d you think of Jim Broadbent’s GoT debut? Drop some knowledge on us in the comments.