Warning: This post contains spoilers for Sunday’s Game of Thrones.

Did you see Gendry on this week’s Game of Thrones and think, “Wait, I know him… but who is he again?” If so, don’t worry: We’re cracking open the Big Book of Westeros for a quick refresher course.

We can’t exactly blame you for forgetting Gendry, played by Joe Dempsie; we haven’t seen him on GoT since way back in Season 3. (Back then, King Joffrey was still alive, and we hadn’t even met Oberyn Martell yet.) A blacksmith by trade, Gendry always insisted he was lowborn, growing up in humble Flea Bottom, his mother a “tavern wench” who died young. But he later learned he’s the bastard son of King Robert Baratheon… a fact that makes him a serious contender to rule all of Westeros.

This week, after sneaking Tyrion into King’s Landing, Ser Davos discovered a close-cropped Gendry anonymously hammering out a sword in Flea Bottom: “Here I am, arming Lannisters, and no one gives me a second look.” Gendry said he’s ready to rejoin the fight, though, grabbing a seriously huge hammer-type weapon on his way out — and using it to crush the skulls of a couple of guards before rowing back to Dragonstone with Davos and Tyrion. Back there, Gendry introduced himself to Jon Snow, not bothering to keep his true identity secret, and volunteered his services against the White Walkers, joining Jon, Davos and Ser Jorah Mormont at the Wall. (Read TVLine’s full episode recap right here.)

Gendry’s one of the more well-traveled Thrones characters: We first met him in Season 1 at King’s Landing, where Ned Stark (RIP) admired a helmet he crafted. After King Robert’s death, Gendry was hustled out of King’s Landing — not realizing that, as a descendant of Robert’s, he’d be a target for assassination — and joined the Night’s Watch. There, he met Arya Stark (disguised as a boy), who he stood up for against a group of bullies and eventually befriended. 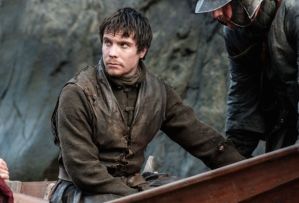 Arya and Gendry hit the road together in Season 2, where Arya confided in him that she’s really a girl, and the two established a tight, brother-sister bond. The two were captured and taken to Harrenhal, before Jaqen H’ghar (aka the Faceless Man) helped them escape. But they weren’t free for long: In Season 3, Arya and Gendry (along with Hot Pie) were taken captive again, this time by the Brotherhood Without Banners, led by Beric Dondarrion.

Gendry actually thought he’d found a home with the Brotherhood… until Beric sold him off to Melisandre for two bags of gold. (Gendry bitterly recalled that betrayal this week when encountering Beric again — a betrayal that led to Arya adding Beric to her “kill list.”) The Red Woman took Gendry to Dragonstone, telling him all about his royal lineage… before seducing him. (She spiced up their liaison by tying Gendry up and using leeches to draw his blood.) But then she imprisoned him and planned to sacrifice him in a blood ritual to support Stannis Baratheon’s claim to the Iron Throne.

Luckily, Gendry and Ser Davos bonded over their shared upbringing in Flea Bottom, and Davos freed him before Melisandre could get her hands on him, shipping Gendry off on a rowboat in the Season 3 finale. And until this week, that was the last we saw of Gendry. (Hence Davos’ joke when he saw Gendry again: “Thought you might still be rowing.”)

His royal status only grew in his absence, though: The Season 5 deaths of Stannis and his daughter Shireen left Gendry as the only living person in Westeros carrying the Baratheon blood line. That gives him a legitimate claim to the Iron Throne… which Cersei Lannister will totally honor, right?