Are you overwhelmed by how much television is available these days? Is life getting in the way of keeping up with the shows you wanna try out? We feel your tube-related pain, so here’s a handy feature to help you locate the hidden gems in this Peak TV era.

CREATED BY  |  Justin Marks, whose only previous major project was Street Fighter: The Legend of Chun-Li (really!)

EPISODE LENGTH | 60 mins. (though technically more in the mid-50s range)

PREMISE | Academy Award winner J.K. Simmons (Whiplash) plays Howard Silk, a low-level wonk at the Office of Interchange in Berlin who one day is abruptly introduced to his “other” — the Howard Silk from a top-secret parallel world. A highly skilled spy, Howard “Prime” has covertly traveled to our side to track an assassin named Baldwin, but to stick around and complete his mission, “our” kindly, meek Howard must take his stone-cold, dickish doppelganger’s place over there.

The question of which Howard better maintains his cover while interacting with familiar-yet-different friends, foes and family is a nail-biter, to be sure, but also demanding your undivided attention (this is not a laundry-folding show!) is the hunt for a mole at the the Office of Interchange — especially once we the viewer become first to discover who it is. 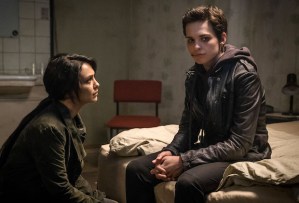 Across the board, this cast is fantastic. In addition to Simmons and his nuanced differentiation of the two Howards, you have Olivia Williams (Dollhouse) as their wives Emily; Sara Serraiocco as the enigmatic Baldwin and Nazanin Boniadi (Homeland) as her handler (pictured right); and Harry Lloyd (Manhattan) as our Howard’s on-the-edge supervisor. And that’s not to mention Stephen Rea (The Crying Game), Richard Schiff (The Good Doctor) and Sarah Bolger (Mayans MC).

WORTH YOUR TIME IF YOU ENJOY… | A science-fiction thriller that hovers close enough to reality that you can just about touch it. Fringe‘s own take on parallel worlds and differing doppelgangers. Accents.

YOU SHOULD PROBABLY ALSO KNOW… | Much of Season 1 was filmed on location in and around Berlin, making the city around which everyone gets to scampering and skulking a gritty, grey character unto itself.

IS IT COMING BACK? | It was never not! The series’ original order was for two 10-episode seasons, the second of which premieres Sunday, Dec. 9 at 9/8c.

WHERE CAN I WATCH IT? | Season 1 is available via the Starz app (Episode 1 is free), Amazon Prime and iTunes.

Watch trailers for Season 1 (as well as Season 2) below, then hit the comments to let us know if you’ll tune in — or if you’re already a fan!