PREMISE | Netflix’s latest true-crime documentary obsession (executive-produced by Mark and Jay Duplass) tells the unbelievable true story of Indian spiritual guru Bhagwan Shree Rajneesh and his devoted followers, who bought up a huge chunk of rugged Oregon wilderness in 1981 and instantly began butting heads with their new neighbors. A simple culture-clash tale gets progressively stranger, with accusations of mass poisoning and election fraud, assassination attempts and a dramatic finish that made national headlines. The Way brothers weave together a shocking, complex narrative using a combination of vintage news reports, intimate home movies and contemporary interviews with the key people involved.

WORTH YOUR TIME IF YOU ENJOY… | True-crime documentaries that are crazier than fiction; a peek at the inner workings of religious cults; in-depth chronicles of the hippie/New Age movement of the 1960s and ’70s; gasping in disbelief every 20 minutes or so. 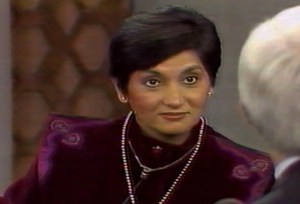 YOU SHOULD PROBABLY ALSO KNOW… | Using the word “wild” twice in the title may seem redundant, but it’s absolutely justified, because this thing is wild. The story takes so many bonkers twists and turns, you’ll be dizzy at the end of each hour. (You might think you know who you’re rooting for one minute, and then completely change your mind the next.) It hits hot topics like fear of immigrants, religious liberty and the perils of resolving political differences with violence. Plus, it serves up a compelling cast of characters, highlighted by the guru’s personal secretary Ma Anand Sheela, a wildly combative woman who defends her community to the outside world with a frighteningly fiery passion. (Attention, TV showrunners: You’re going to have to work overtime to create a more fascinatingly layered character than Sheela.)

IS IT COMING BACK? | No, despite the big buzz surrounding it right now, Netflix tells TVLine there are currently no plans for a second season of Wild Wild Country.

WHERE CAN I WATCH IT? | All six Season 1 episodes are available to stream now on Netflix.