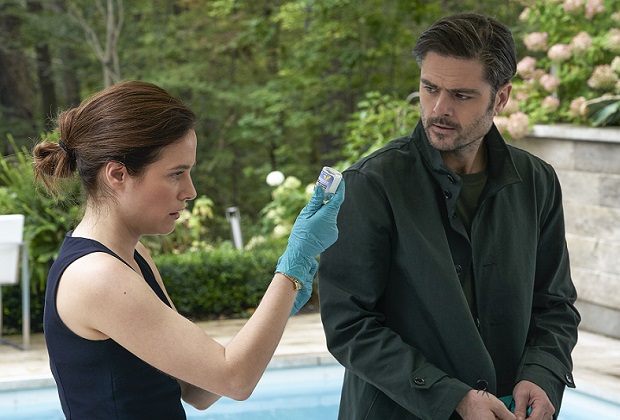 PREMISE | Mary (Hannibal‘s Caroline Dhavernas) is a divorced mother and ER doctor with a controversial side job: She secretly helps suffering and terminally ill patients who want to end their life. Her business partner in this endeavor is Des (666 Park Avenue‘s Richard Short), a former plastic surgeon who lost his license due to addiction. Mary and Des’ operation gets complicated when one of their clients, Ben (Beauty and the Beast‘s Jay Ryan), turns out to be a detective intent on bringing Mary to justice. Oh, and Mary had sex with him before discovering his real identity. As if that weren’t enough, Mary’s older daughter (Between‘s Abigail Winter) is inching closer to the truth about her mom’s other job, and the drug dealer (Bitten‘s Greg Bryk) from whom Mary and Des get pentobarbital is threatening her family.

This being a Canadian drama, fans of Rookie Blue will recognize several alums, including Charlotte Sullivan as Mary’s sister and Lyriq Bent as Ben’s partner. (Rookie Blue showrunner Tassie Cameron is also one of the show’s producers/writers.)

WORTH YOUR TIME IF YOU ENJOY… | Dhavernas, who is fantastic as the emotionally complex titular character; challenging storytelling; strong female heroines; sexual tension and forbidden romance. (Mary and Ben should really be staying away from each other for both their sakes, and yet…)

YOU SHOULD PROBABLY ALSO KNOW… | The show treats its difficult subject matter with respect and thoughtfulness, presenting both sides of the assisted suicide debate. That said, Mary is not a sad or depressing series. In fact, it’s often thrilling, packing plenty of suspenseful twists and mystery into its short first season.

IS IT COMING BACK? | Yes — and very soon! Season 2 premieres Monday, March 12 at 9/8c on Lifetime. But the freshman season was only six episodes, so you can totally catch up in time. UPDATED: The third season premieres in 2019 on Canadian broadcaster Global TV. There is no word yet if it will also air on Lifetime.

WHERE CAN I WATCH IT? | All of Season 1 is streaming on Hulu. Episodes are also available for purchase via iTunes, Amazon Video, Google Play, YouTube and Vudu.